A Philadelphia Proposal – Clair and Evan 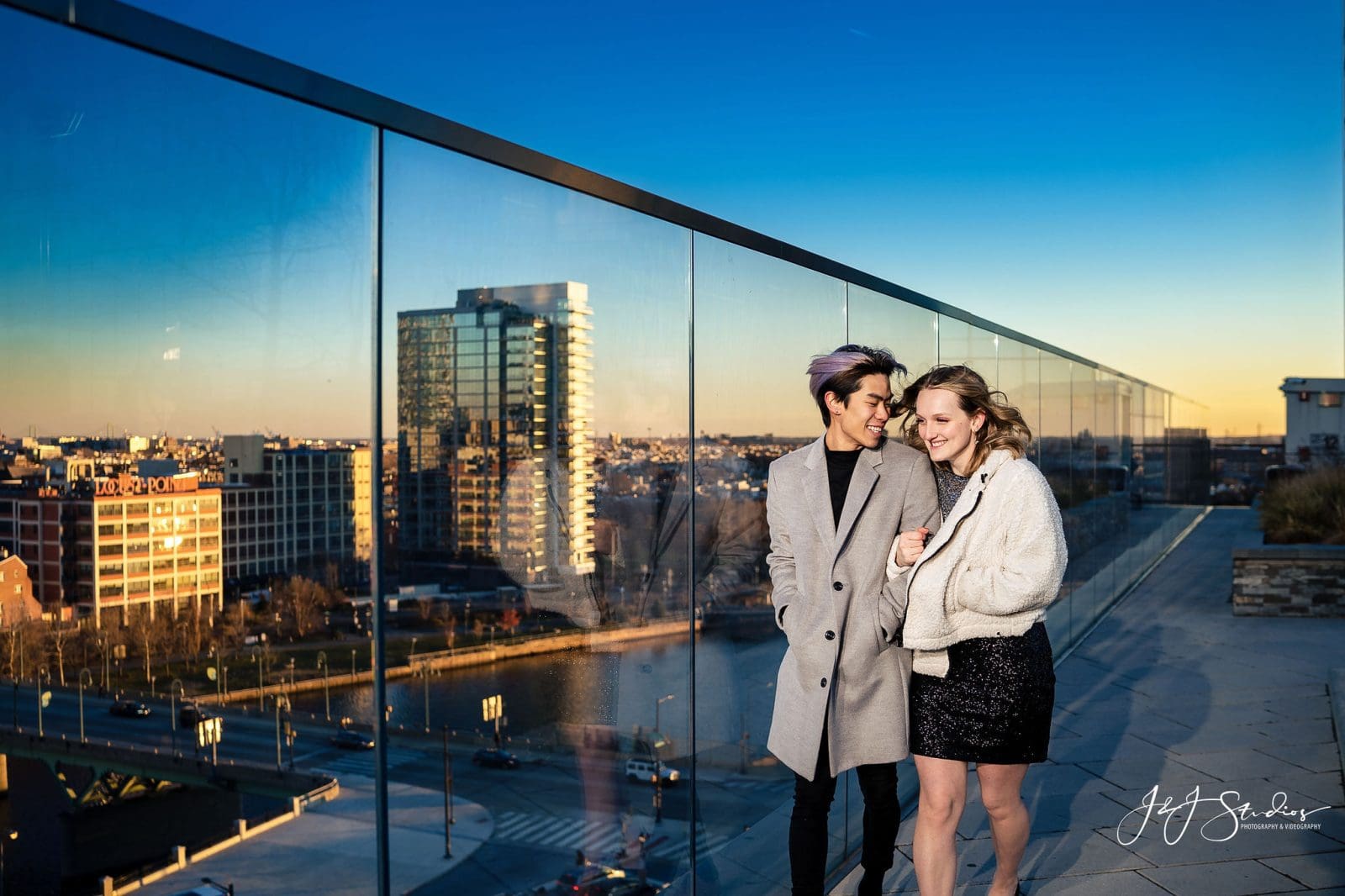 There is definitely excitement in the air as this lovely couple, Clair and Evan, are captured so elegantly in a Philadelphia Proposal photo shoot.  Through the lens of award-winning photographer, John Ryan of J&J Studios, Clair and Evan used the backdrop of the city of Philadelphia as their canvas in order for John and his team to paint what will amount to a most memorable capture of their special day. 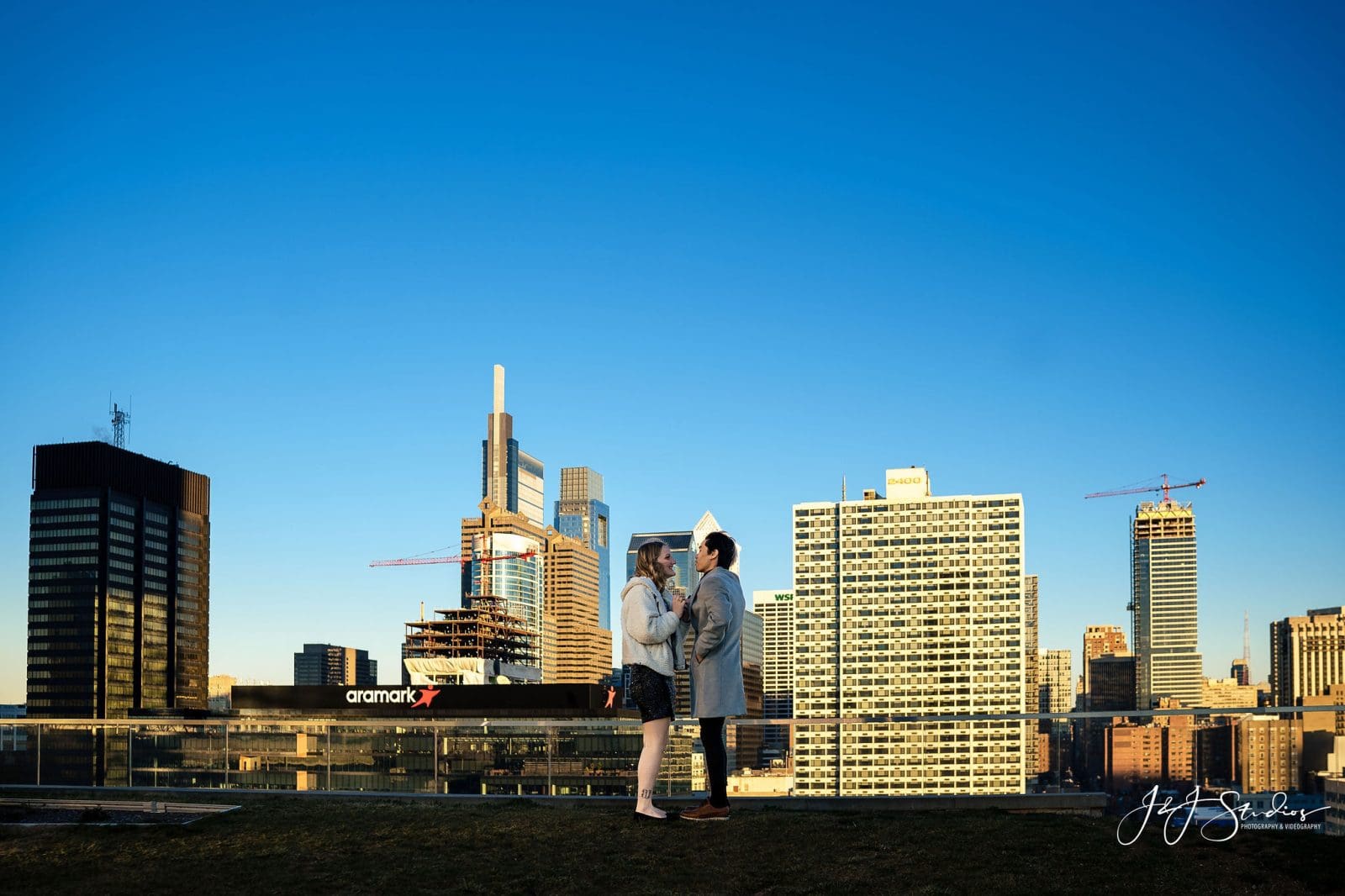 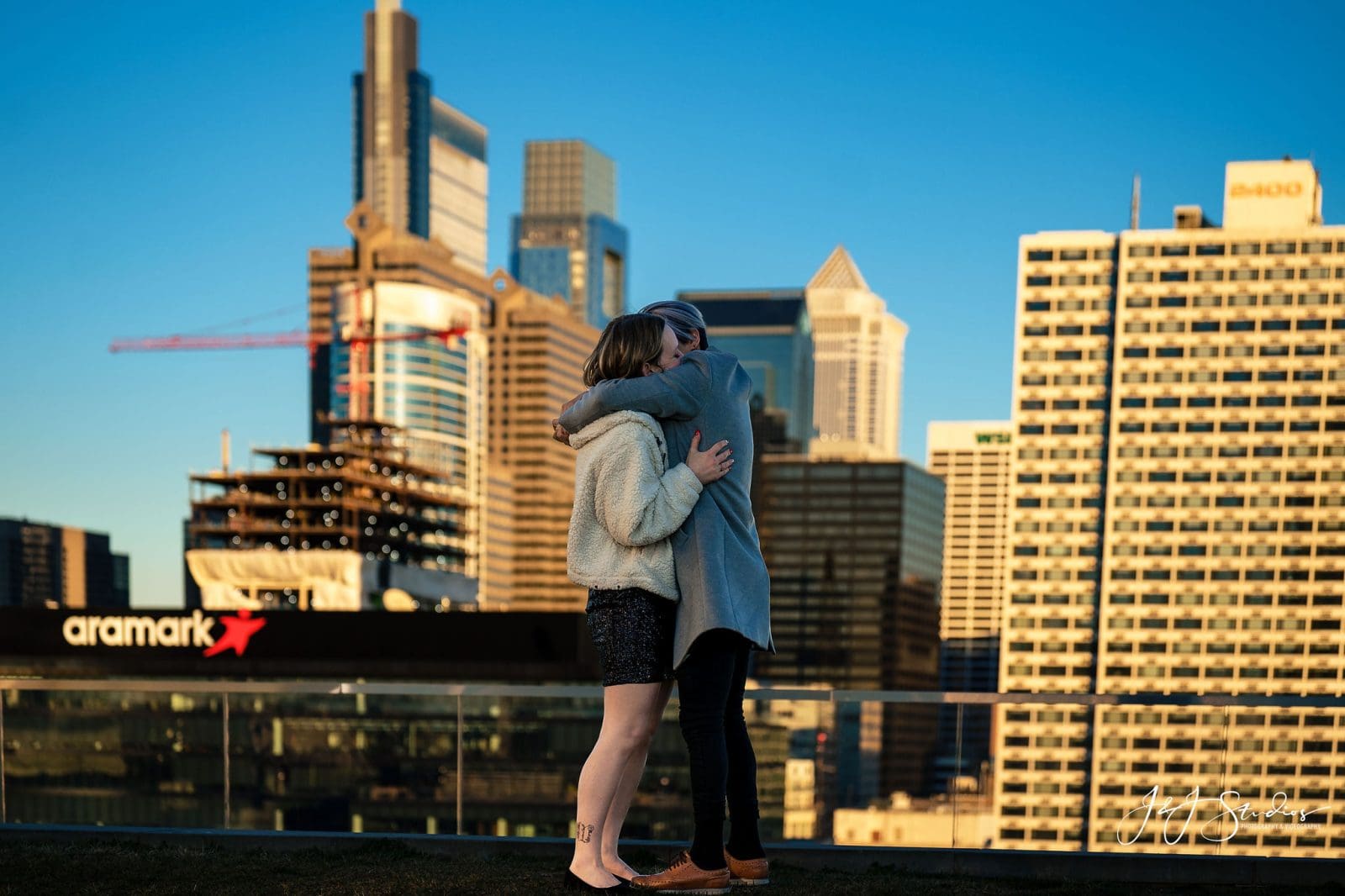 It is a bright crisp day in Philadelphia the day the proposal of Clair and Evan was taking place.  The sun bathed the city in a brightness that provided almost a glow to each of the buildings in the background.  Their vantage points were varied – the top of a building overlooking a section of Philadelphia, as well as ground level as they casually strolled with each other, filled with the excitement of the day. 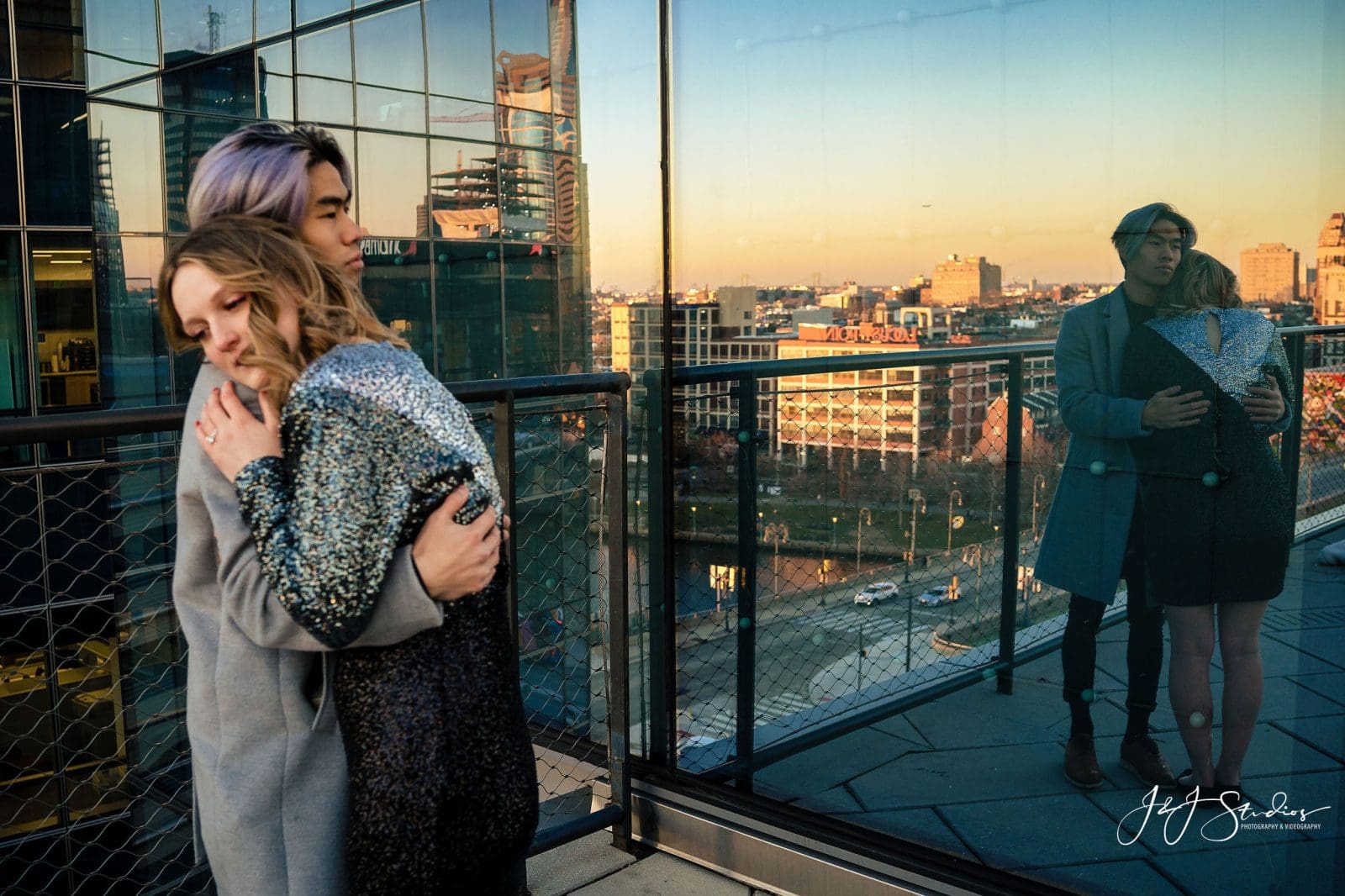 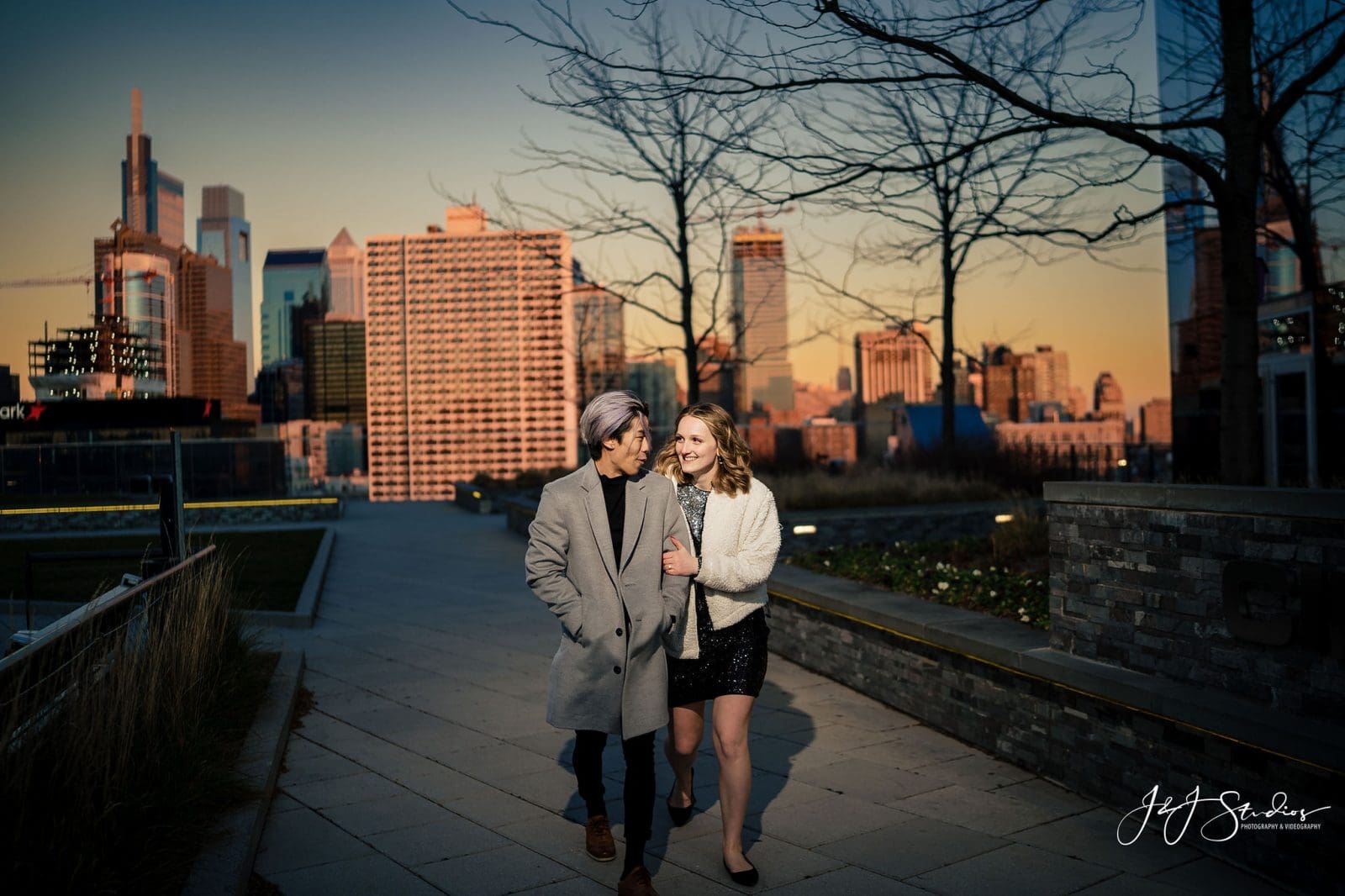 The expressions they display on their faces depicts the the love they are feeling as they prepare to make the official commitment leading towards their journey to marriage and a life together.  A proposal is the beginning in a way of that process.  The history of the courting process and proposing is an interesting one. In some Western cultures it is traditional for the man to make a proposal to the woman directly while genuflecting in front of her. The ritual often involves the formal asking of the question “Will you marry me, …?” and the presentation of an engagement ring. It may include him putting the ring on her finger. In order to have the engagement blessed and ratified by the Church, Christian couples may then receive the optional Rite of Betrothal (also known as ‘blessing an engaged couple’ or ‘declaration of intention’), which often includes prayer, Bible readings, a blessing of the engagement rings (in cultures in which rings are used), and a blessing of the couple.[2][3][4]

Other customs of initiating a marriage may include formal introduction of the partners to each other, such as the Japanese traditional custom of Miai.

In many cultures it is traditional for a man to ask permission from a woman’s father, in private, before proposing to her, or if her father has already died and she is still young, to ask permission of a near relation of hers. In earlier times, parental consent was necessary, if the man wanted to receive a dowry or other money, and fathers could refuse proposals from men whom they considered unsuitable as husbands for their daughters.

In the Indian subcontinent, the parents of the couple may make a marriage arrangement, preceding or superseding the proposal, after which an engagement ceremony can occur.[5] Arranged marriages were common between members of royal families throughout most of European history; such marriage contracts and proposals were made at great distances and often without first-hand contact between the parties prior to the engagement.  As you can see, there is a cultural tie to how a proposal leading to an engagement and ultimately a wedding can occur. Adherence to a cultural approach is of course something for all couples to consider and decide what is truly best for them as they begin to build their lives together. 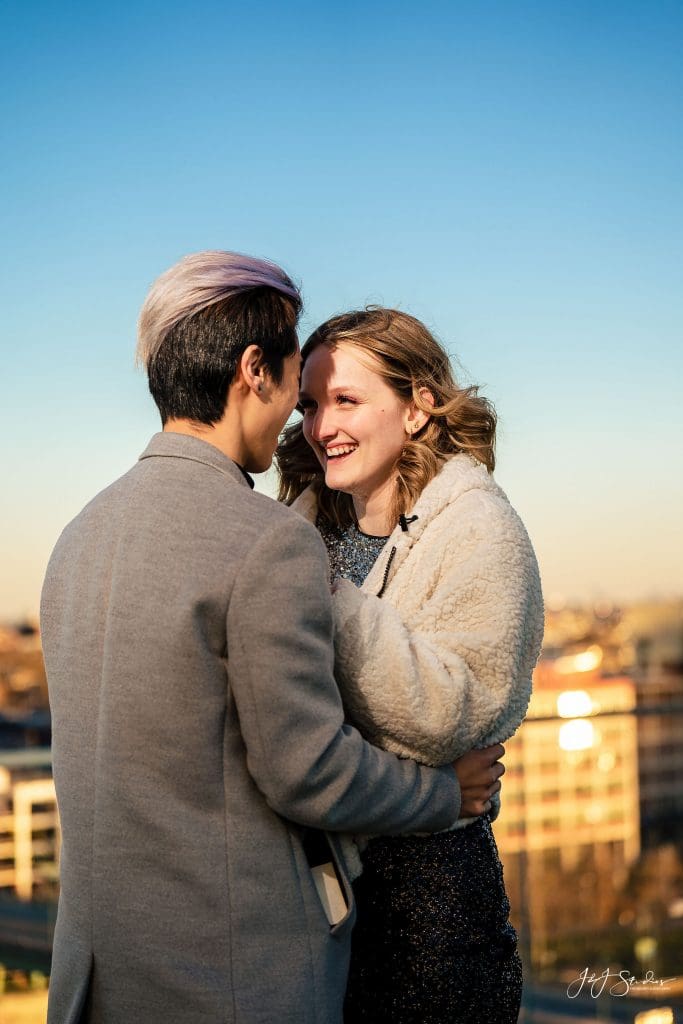 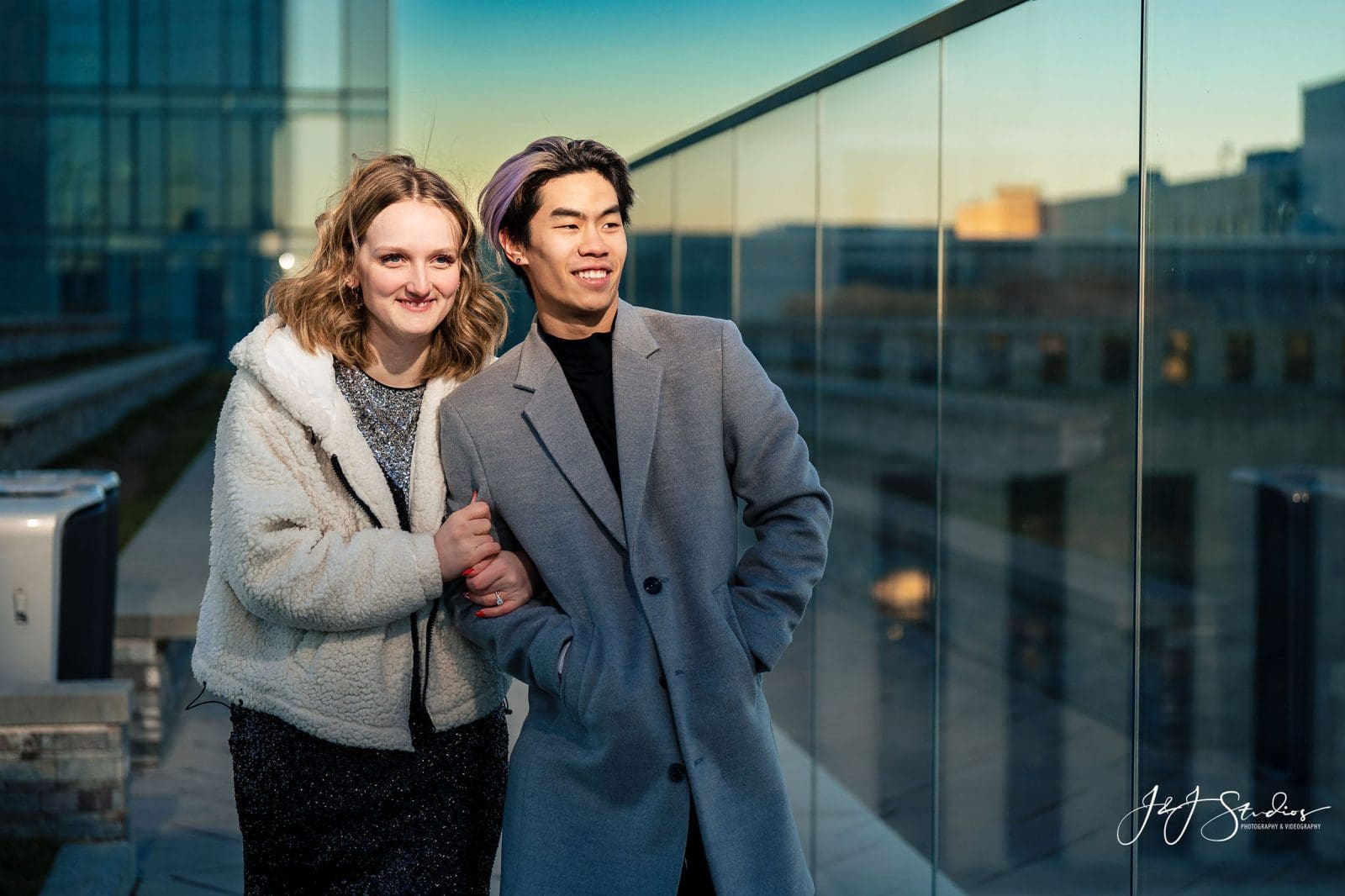 The history of the engagement ring is also interesting. Engagement rings have a long history. The giving of a gold ring to signify a promise of marriage existed in the culture of ancient Rome, and the bride-to-be was expected to wear it in public. The practice of proposing was also widespread in the Middle Ages, although it was perhaps not taken seriously enough by male suitors. Church legislation was introduced in the 13th century in an attempt to crack down on proposals made by gentlemen to women “in jest, so that he might more easily fornicate with them”,  but it was not until the Restoration that a gentleman could face legal action and a fine if they abandoned a woman to whom they were engaged (or had implied marriage to). Instances of offering diamond rings appear among the wealthy from the 1470s, and became a common feature of the 19th-century proposal as they became a cheaper commodity – but it was not until a marketing push of the 1940s that demand for diamonds was set into ‘tradition’. 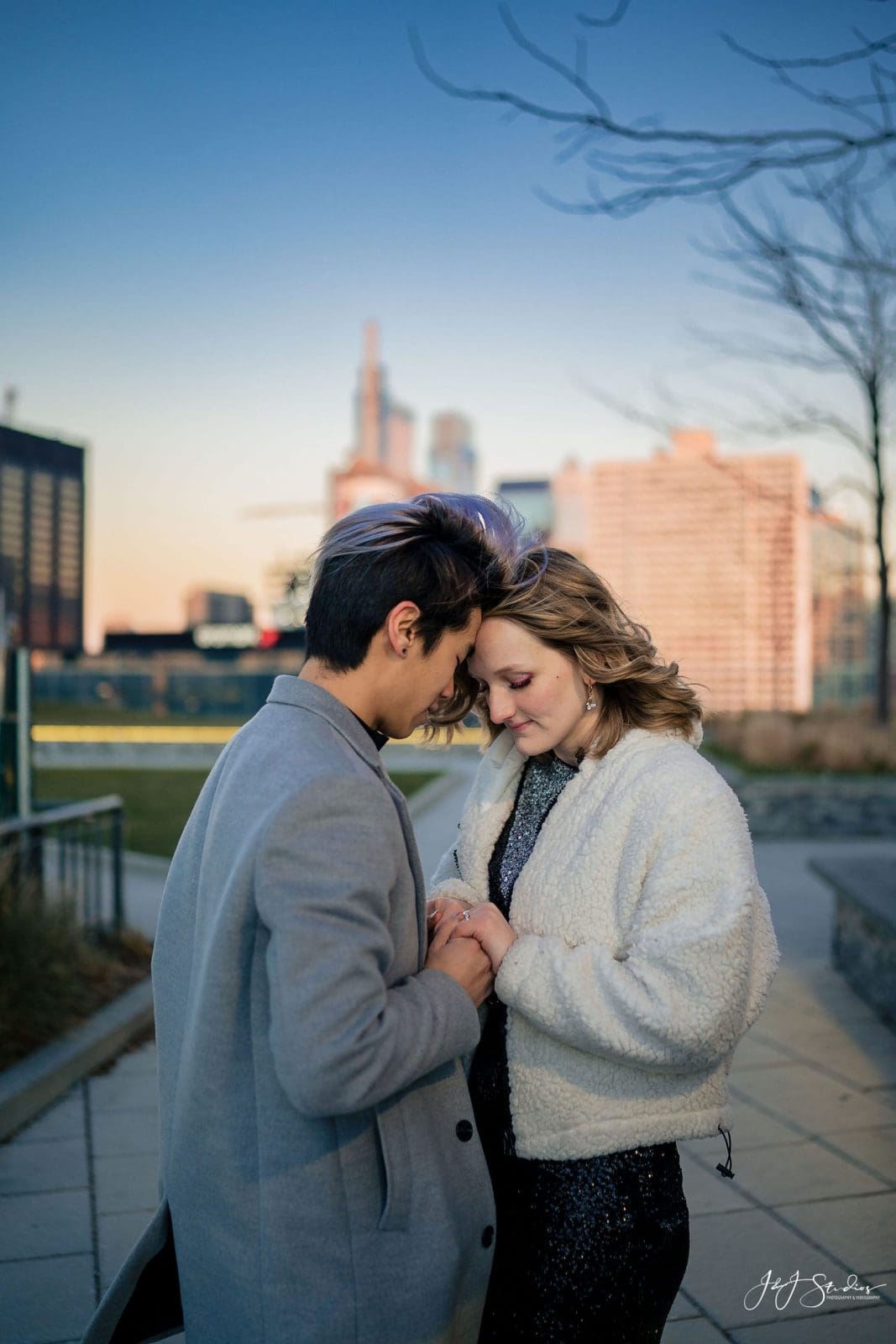 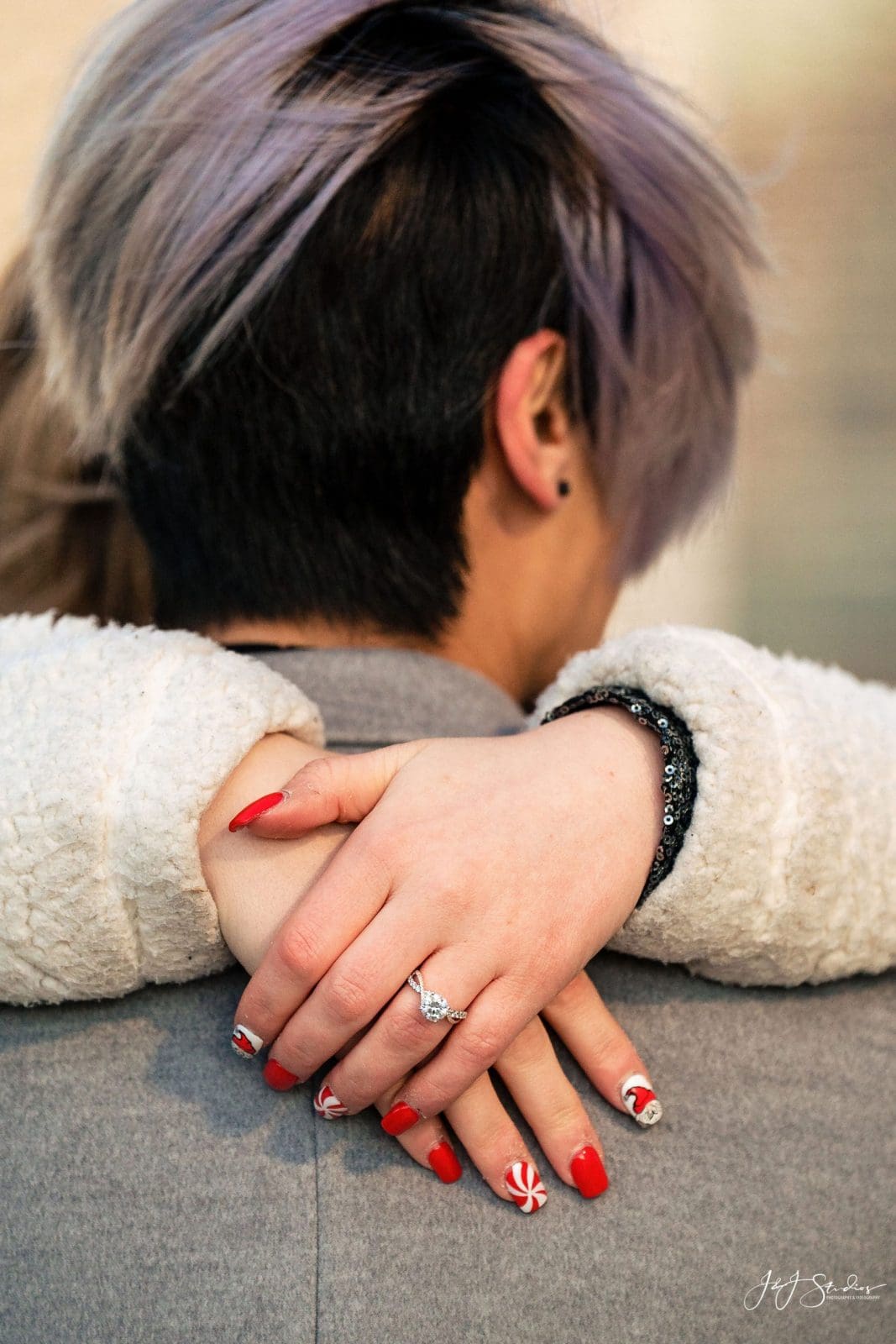 Clair and Evan are a beautiful couple, and these pictures capture the beauty of their relationship.  In addition to these photographs, Clair and Evan sought out John Ryan’s talents and help to credit a video of their special event.  How great to have this as a lasting memory of the beginning of their life’s journey together.

Are you interested in memorializing a special event?  John Ryan and J&J Studios of Philadelphia can help you with any event that you wish to capture, either through photographs or video.  Please contact John at J&J Studios Philadelphia for more information.