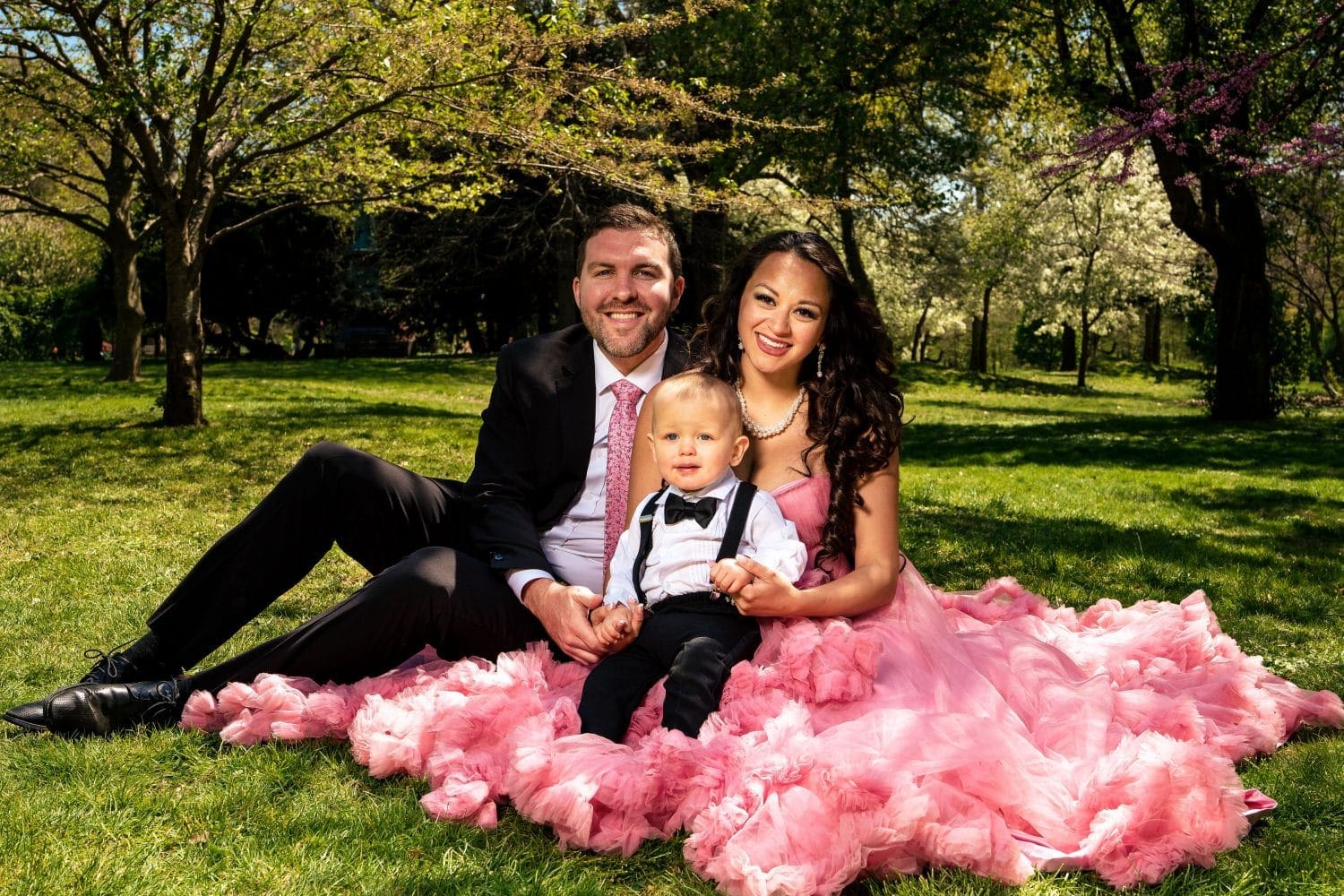 The Magic of Maternity Shoots

Maternity shoots have a certain and particular magic to them. Part of it is the beauty of the mother as she grows and nourishes the baby. Another part is the dynamic between the parents. But sometimes, there’s another, whimsical part – when maternity shoots include the future older siblings of the unborn child.

J & J Studios was enchanted by this maternity shoot in Philadelphia’s Fairmount Park! 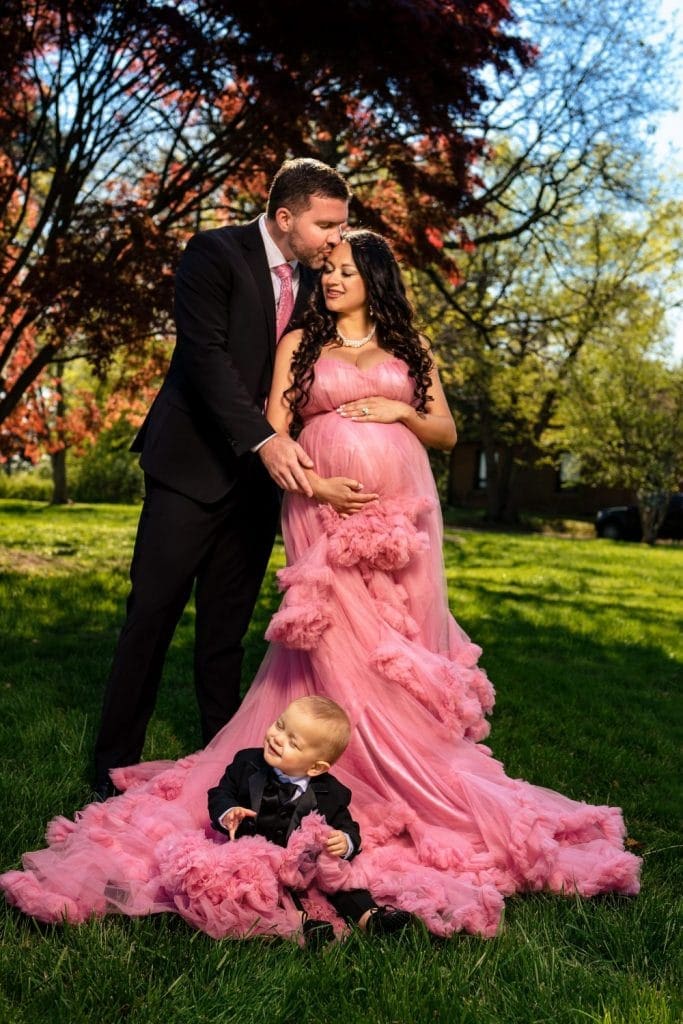 Children are beings of delight and whimsy. They more often than not have wonderfully fanciful imaginations, and their small size brings to mind otherworldly creatures, like fairies, leprechauns, and sprites, to name a few. 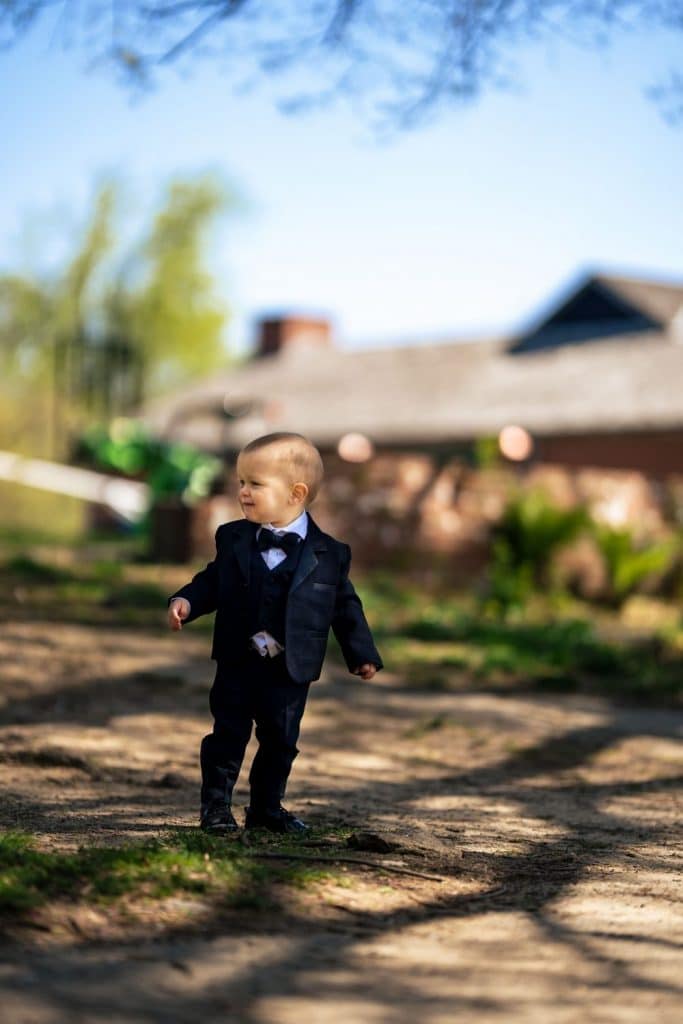 Chris and Erica’s maternity shoot is a beautiful and excellent example of the magic of maternity shoots. They included their adorable son, who looked handsome in his little suit. We thought this shot of him walking through Fairmount Park was too cute for words! 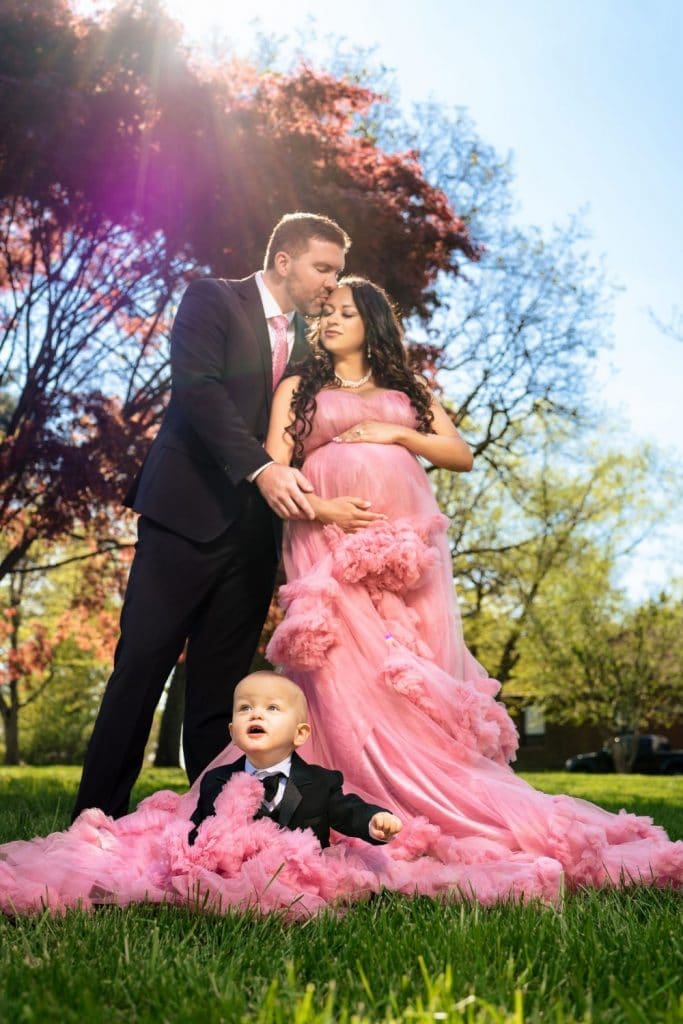 Spring is a fantastic time for a family maternity shoot, especially around the Philadelphia Museum of Art. Everything is in bloom, and the weather is often perfect. This day made for a wonderful canvas for this family spring maternity shoot! 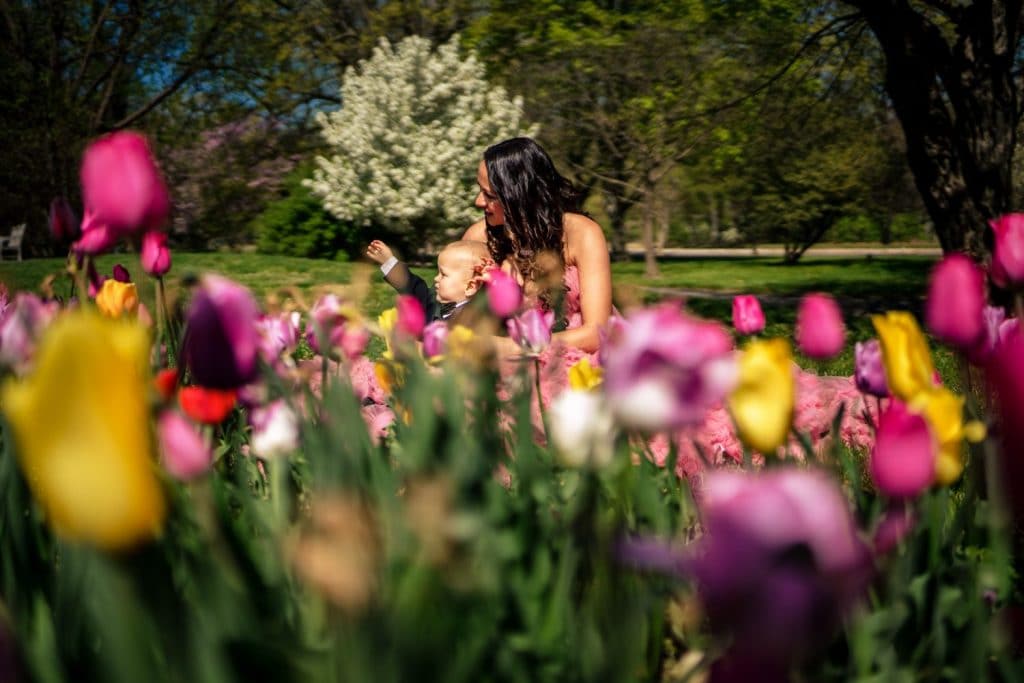 Erica’s gown, with its frothy flounces, reminded J & J Studios of the “pink cloud” mentioned in the lullaby featured in Disney’s film The Lady and The Tramp. 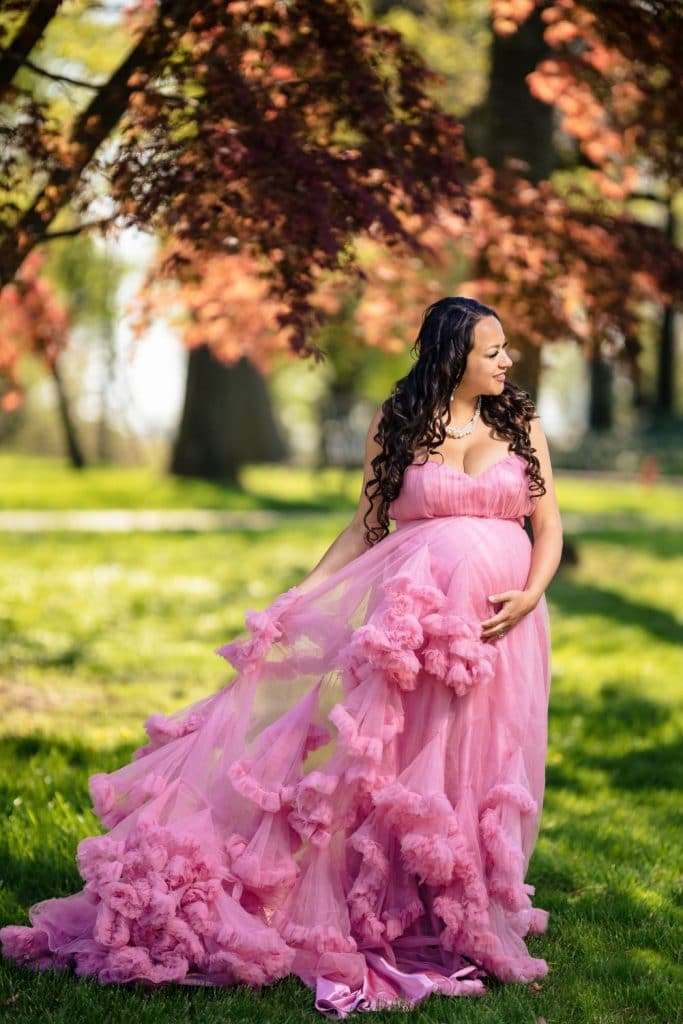 We loved the unintended coordination between Erica’s dreamy dress and the blossoms on these trees in Fairmount Park! 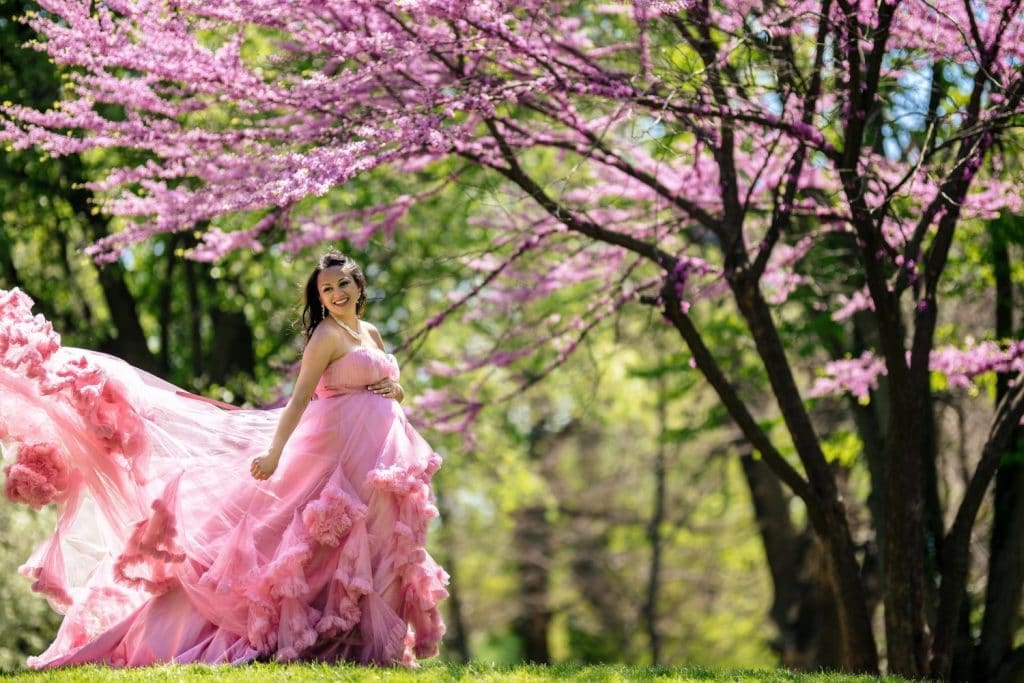 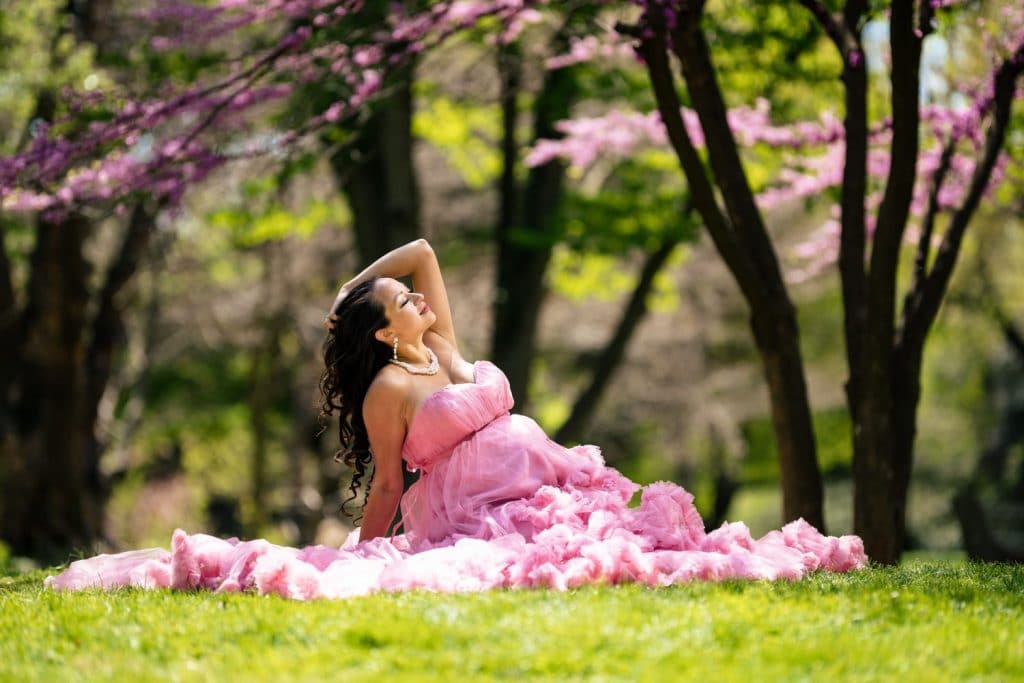 J & J Studios thinks that Erica looks like the fairy queen Titania waking from her sleep in Shakespeare’s A Midsummer Night’s Dream in these photos. She’s definitely the queen to Chris’ king – and we love that they included their little prince, as well! 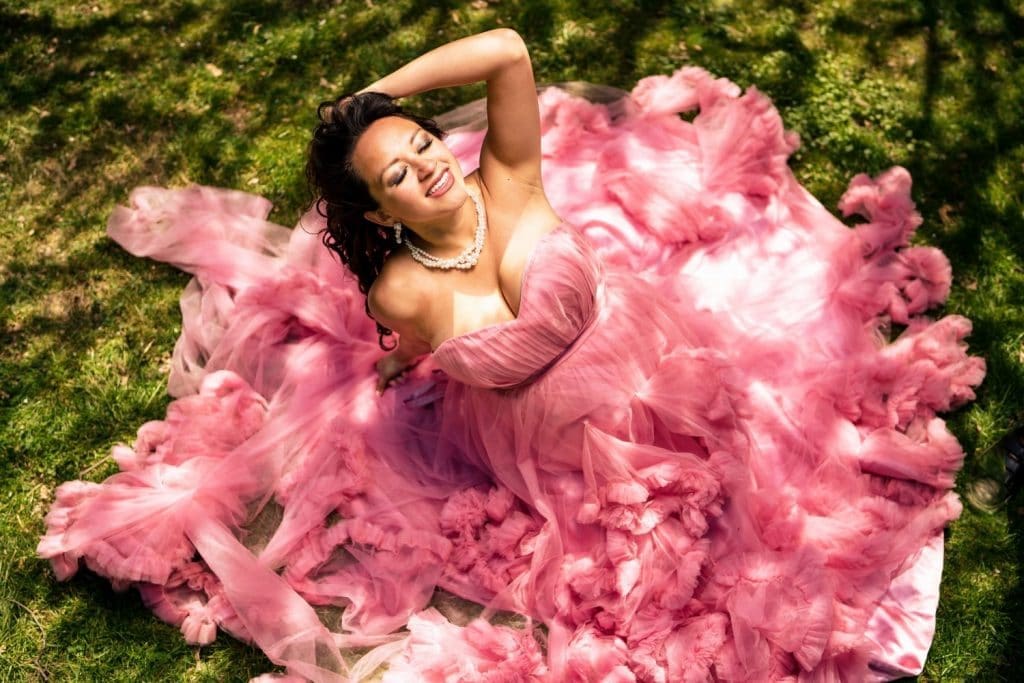 Look at this pair of handsome men! We loved how Chris’ tie matched the color of Erica’s dress. Chris and his son look so happy together! 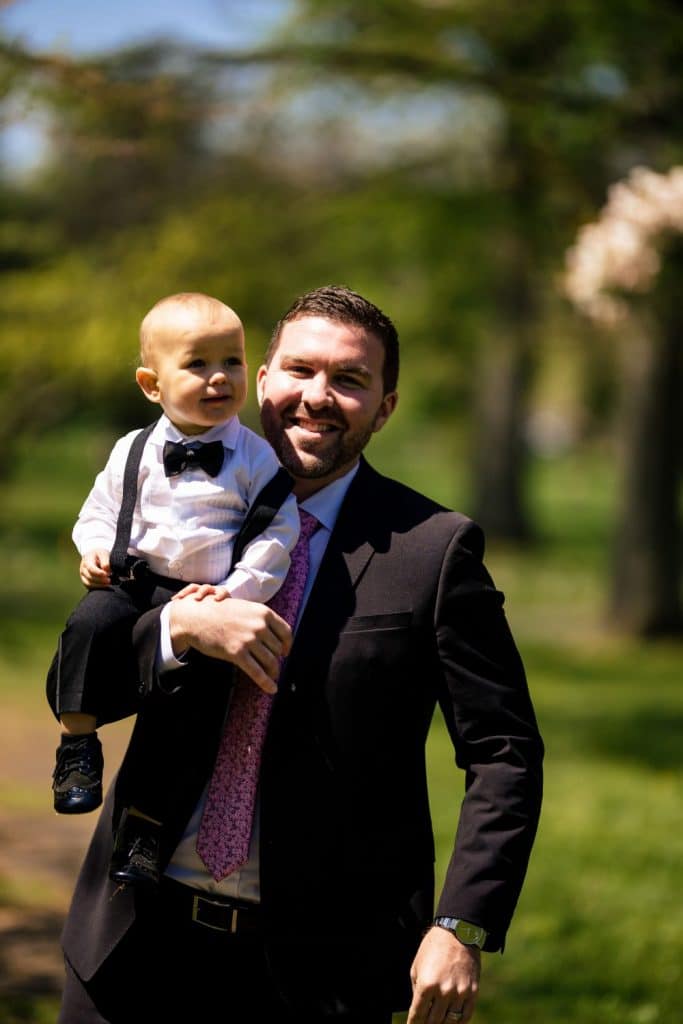 We saw Erica’s dreamy, gorgeous gown and just had to place her in this tree laden with pink flowers! The bottom of each flounce on the skirt of her dress matches the frills of these cherry blossoms. 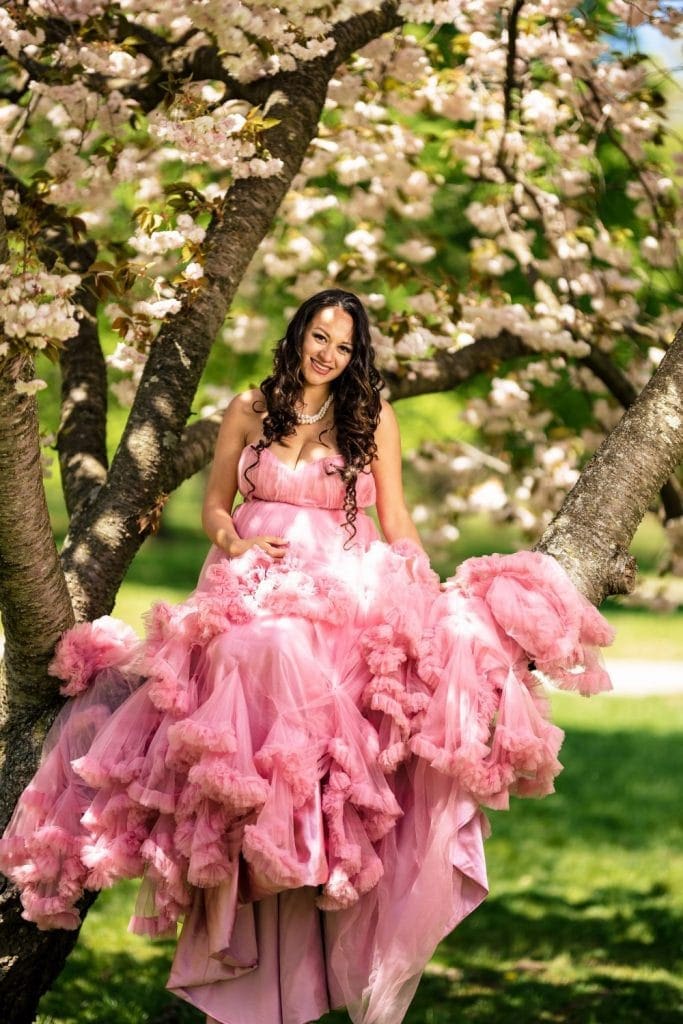 The dappled sunlight and falling flower petals made for an enchanting and memorable moment in this photo of Erica! 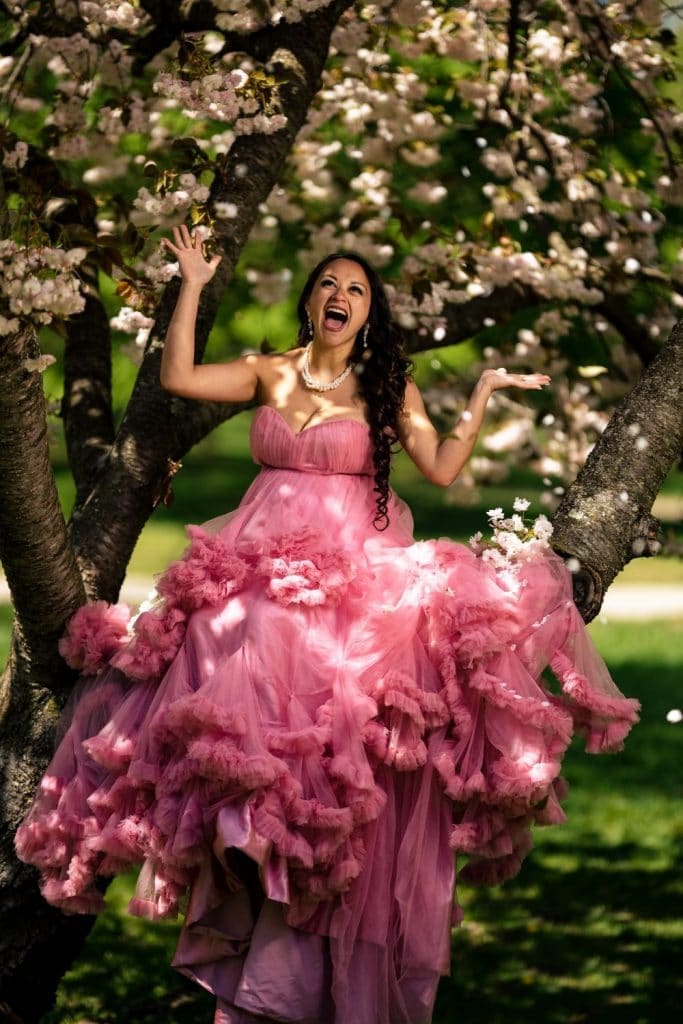 Halfway through their spring maternity shoot, Erica made a wardrobe change. J & J Studios thought her dramatic, figure-hugging red dress was stunning! We had a lot of fun with its billowing train, especially as she stood on the edge of this Fairmount Park fountain. 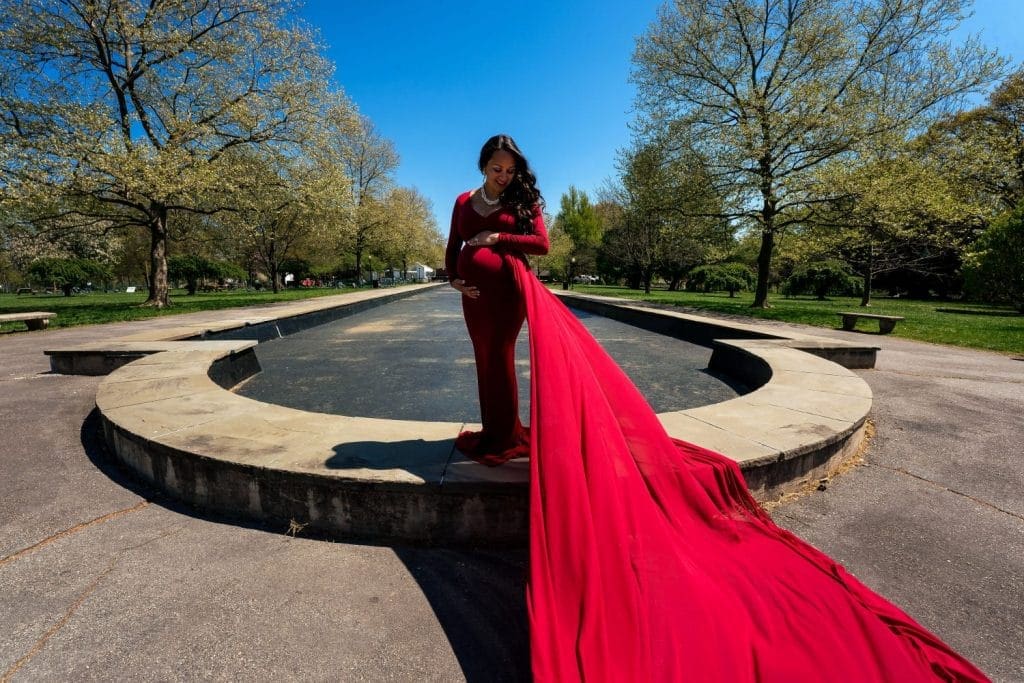 One of the things J & J Studios enjoyed doing with the train of Erica’s red dress was making it appear as though it was swirling about her and Chris in this photo. 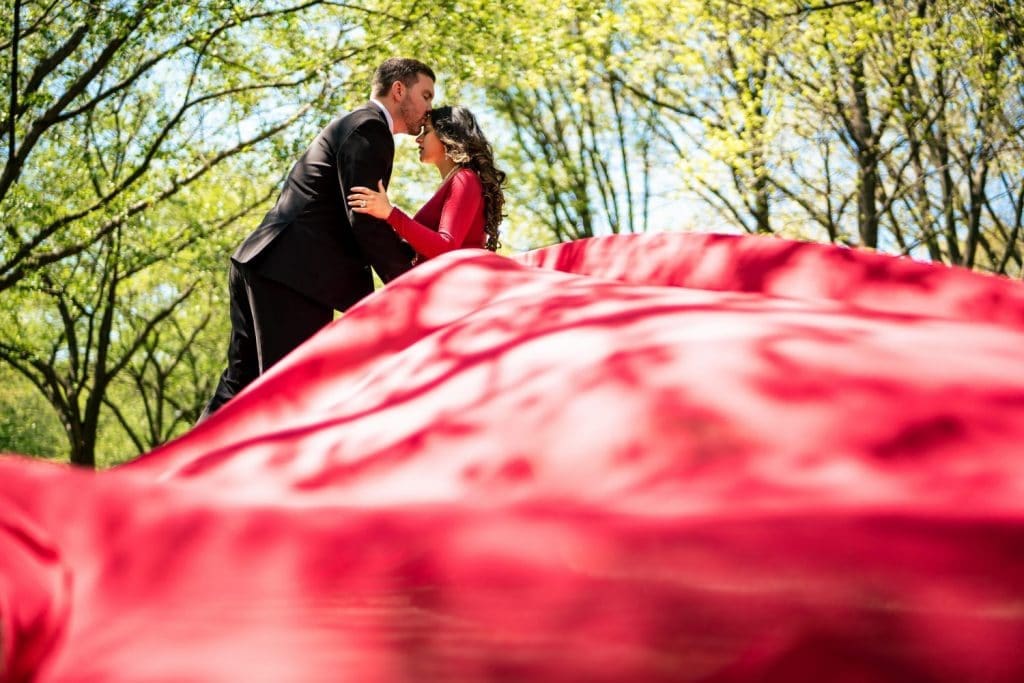 Though family maternity shoots are magical, it’s important to remember the people whose union made the children – born and unborn – come into being. That’s why we made sure to have photos of just Erica and Chris. Plus, this gave their son a moment to rest from being on camera. 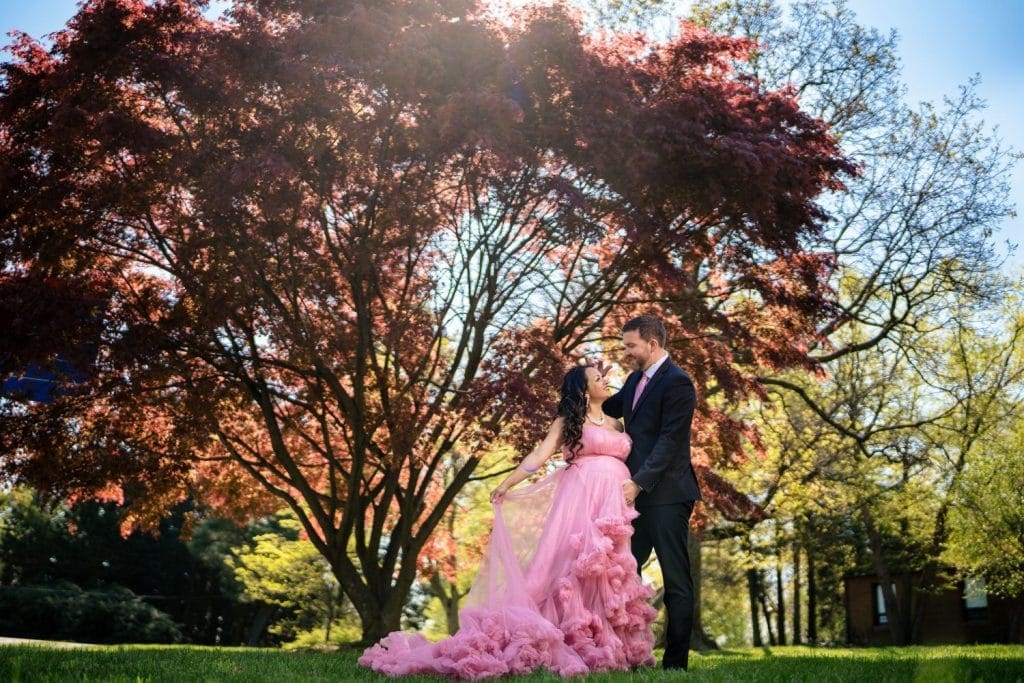 We loved capturing the juxtaposition between the deep, rich red of Erica’s second gown and the bright, clear blue of the spring sky. 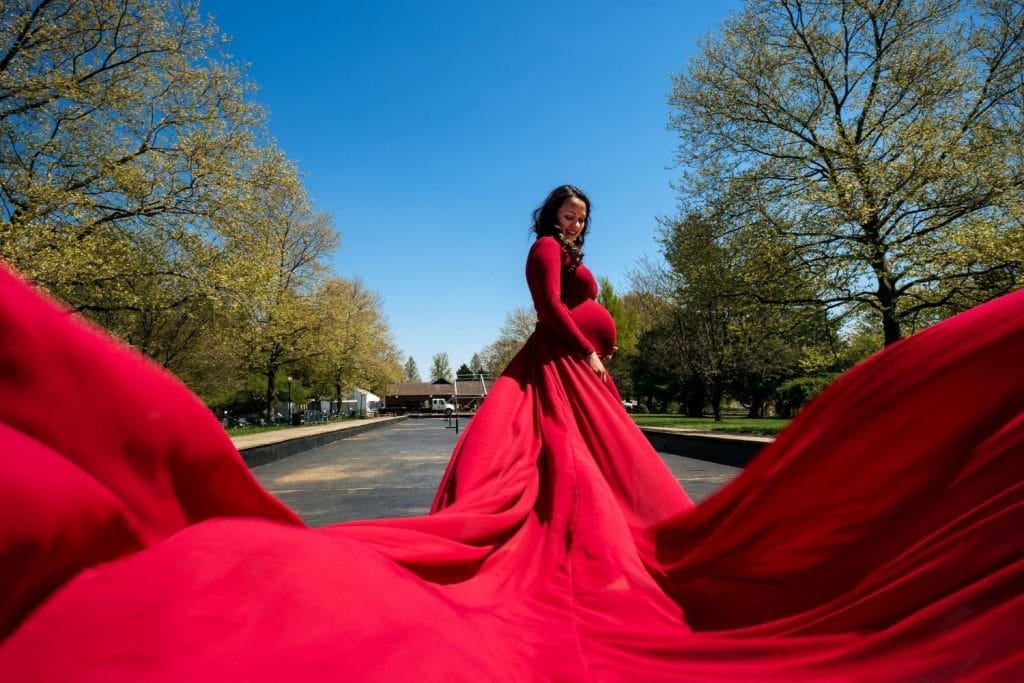 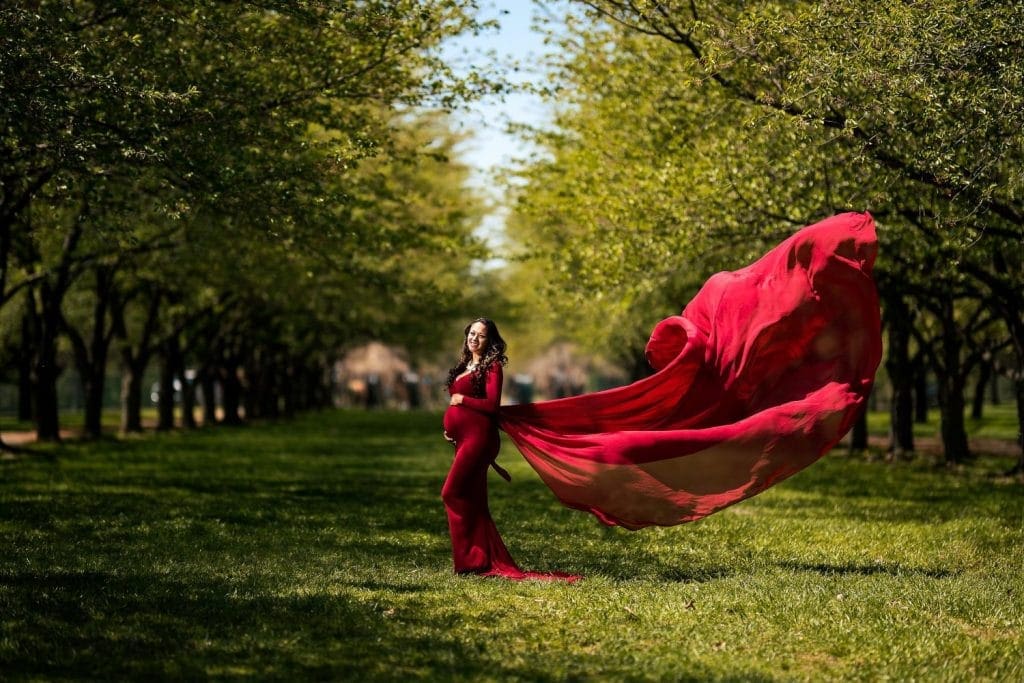 Erica’s multi-strand pearl necklace packed an elegant punch with both her pink and red dresses. 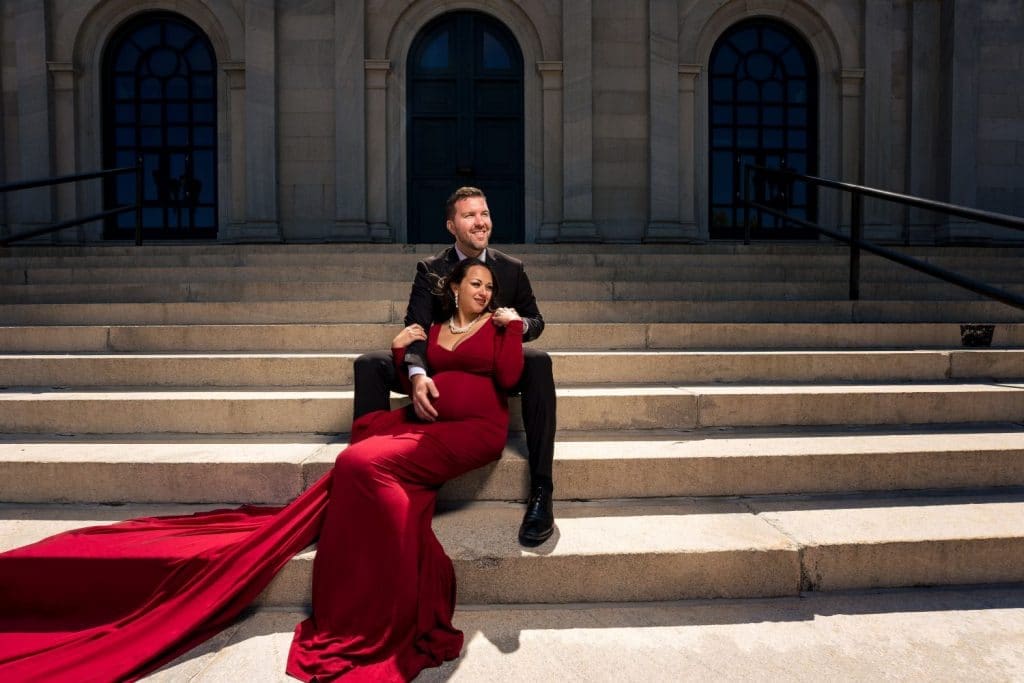 If you’re expecting a little one soon, contact J & J Studios today! We’d love to bring out the magic of your pregnancy with a beautiful photo shoot. Include your partner, your children, even your pets – we’ll capture the magic each of them brings to your maternity shoot. 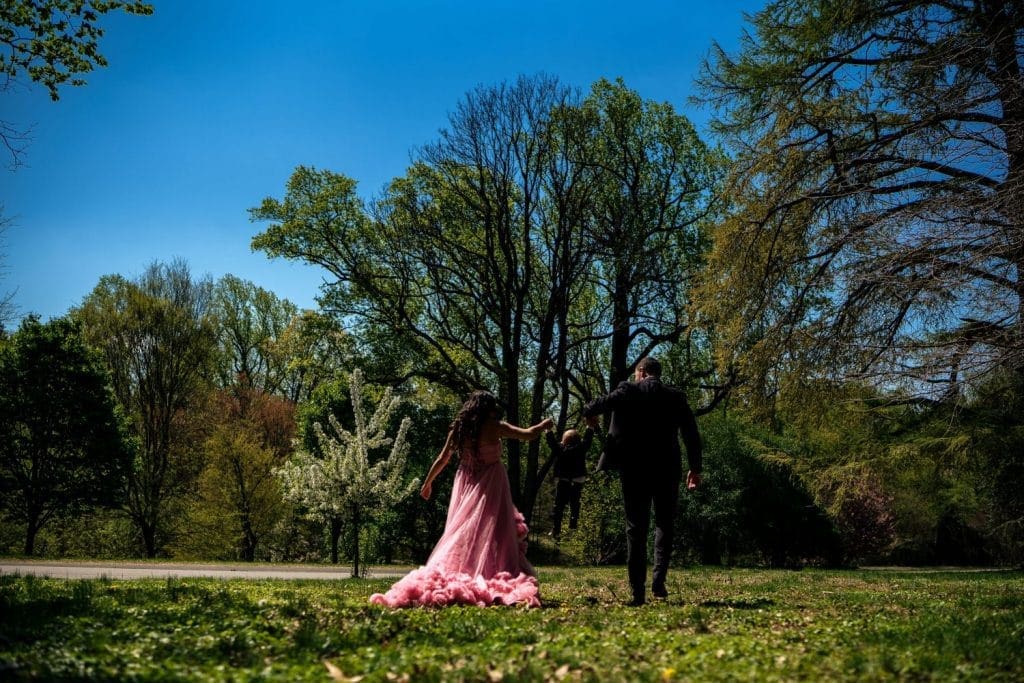