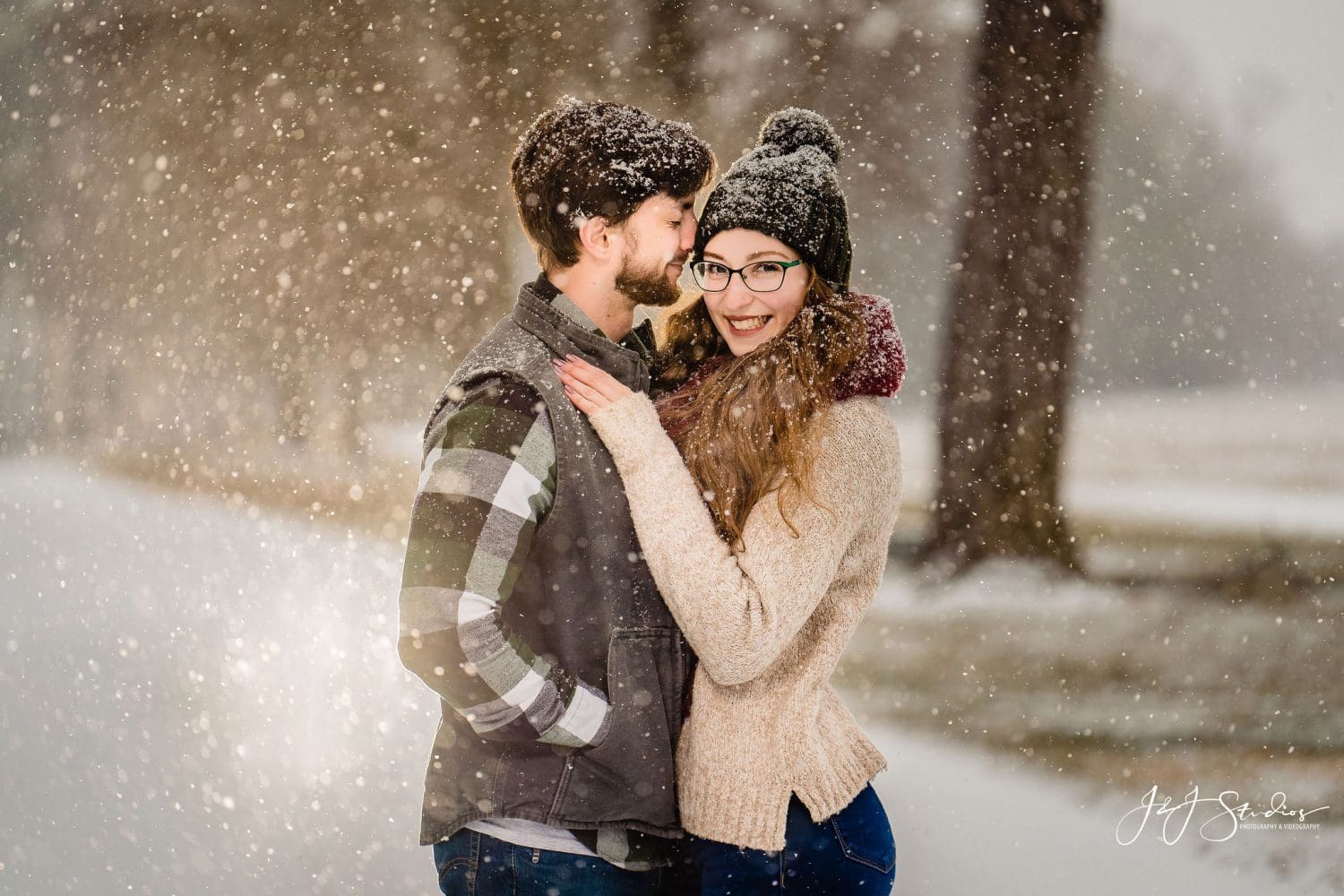 On a snowy day in Montgomery County, PA, Hollie and Evan chose to have their engagement photos taken in Norristown Farm Park. J & J Studios was thrilled to capture this chilly but charming engagement photography session! 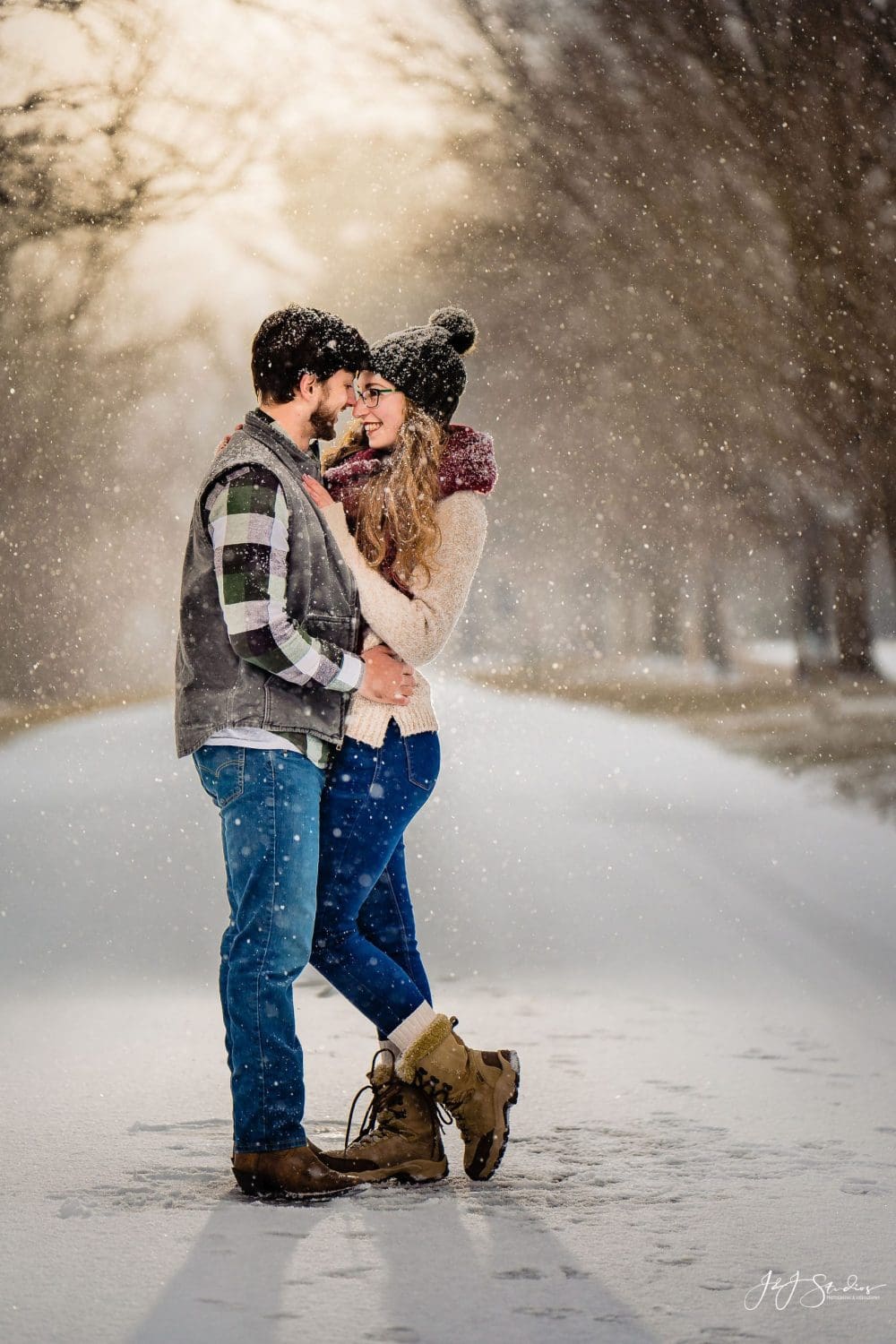 A local and historic park is a wonderful place to have an engagement photography session. It honors your hometown and/or home, while bringing the beauty of nature to your photos. Add to that the magic of powdery snow, and you’ve got the makings for gorgeous photos to capture your love forever! 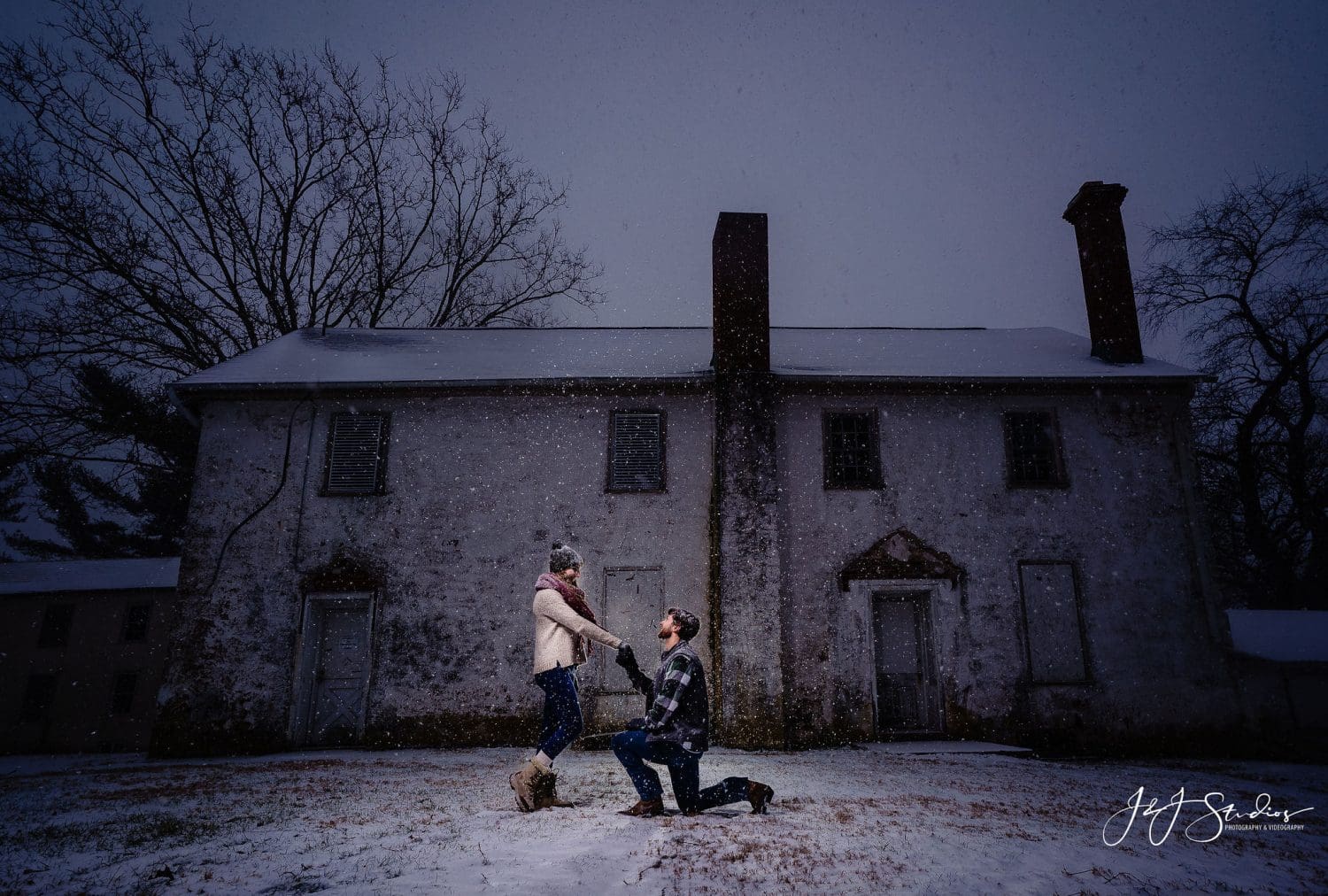 Norristown Farm Park is a testament to the American trait of honest hard work, with its structures (including fields and buildings) representing farming, manufacturing, and institutional associations. The buildings on the grounds of the park date from 1764 to the early twentieth century. These structures had many and varying uses, including functioning as a tannery, the Norristown State Hospital, farms, and parts of mills. 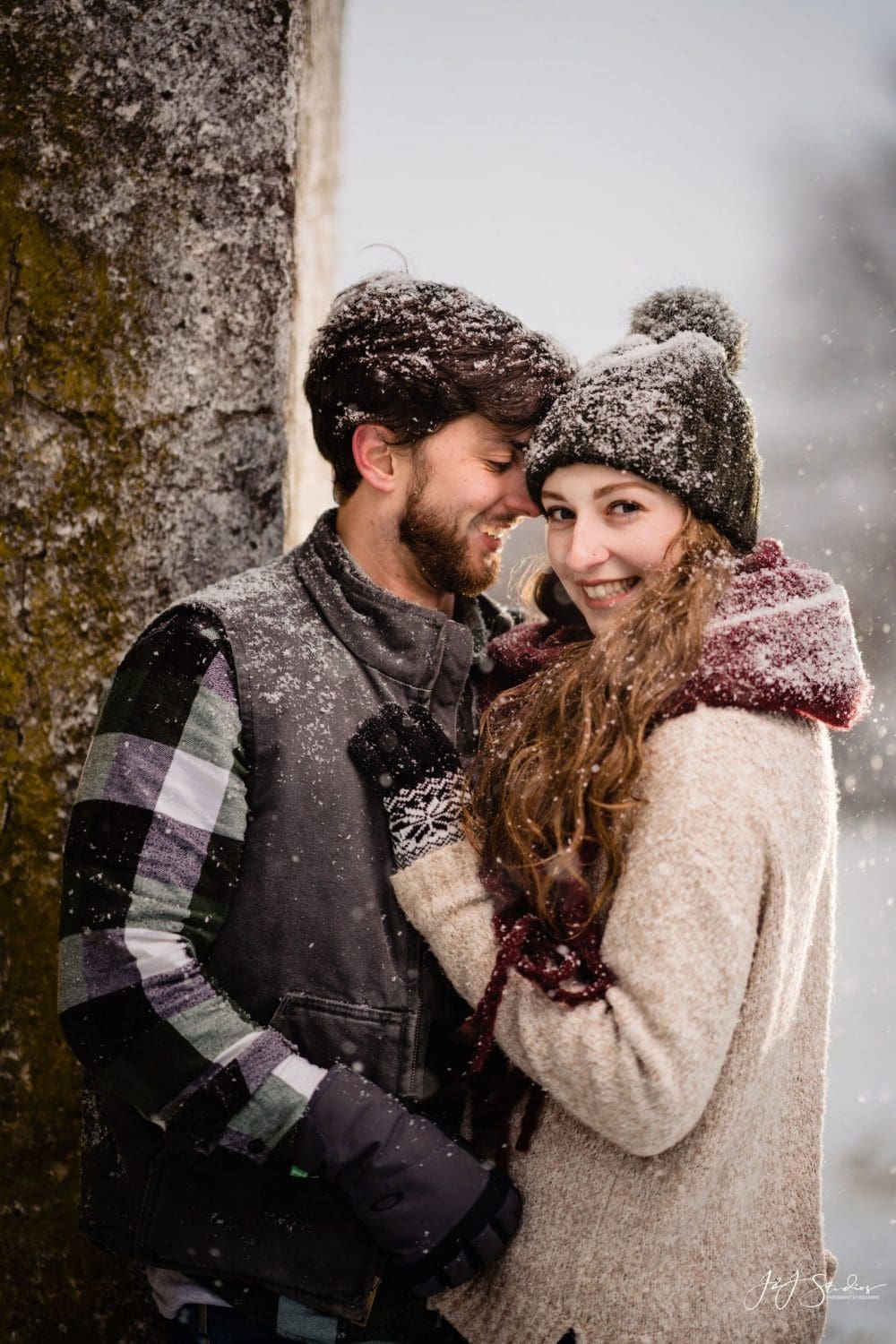 In 1704 William Penn, Jr., son of Pennsylvania’s founder, sold the land to a man named Isaac Norris, after whom Norristown is named. Later James Shannon bought the land and built a mansion on it in 1764. The Shannon mansion still stands and can be viewed near the entrance of the park. John Castner was a shoemaker who also lived on the land that became the park. If you look on the south side of the Castner house, you’ll find a date stone and boot symbol built into its facade. 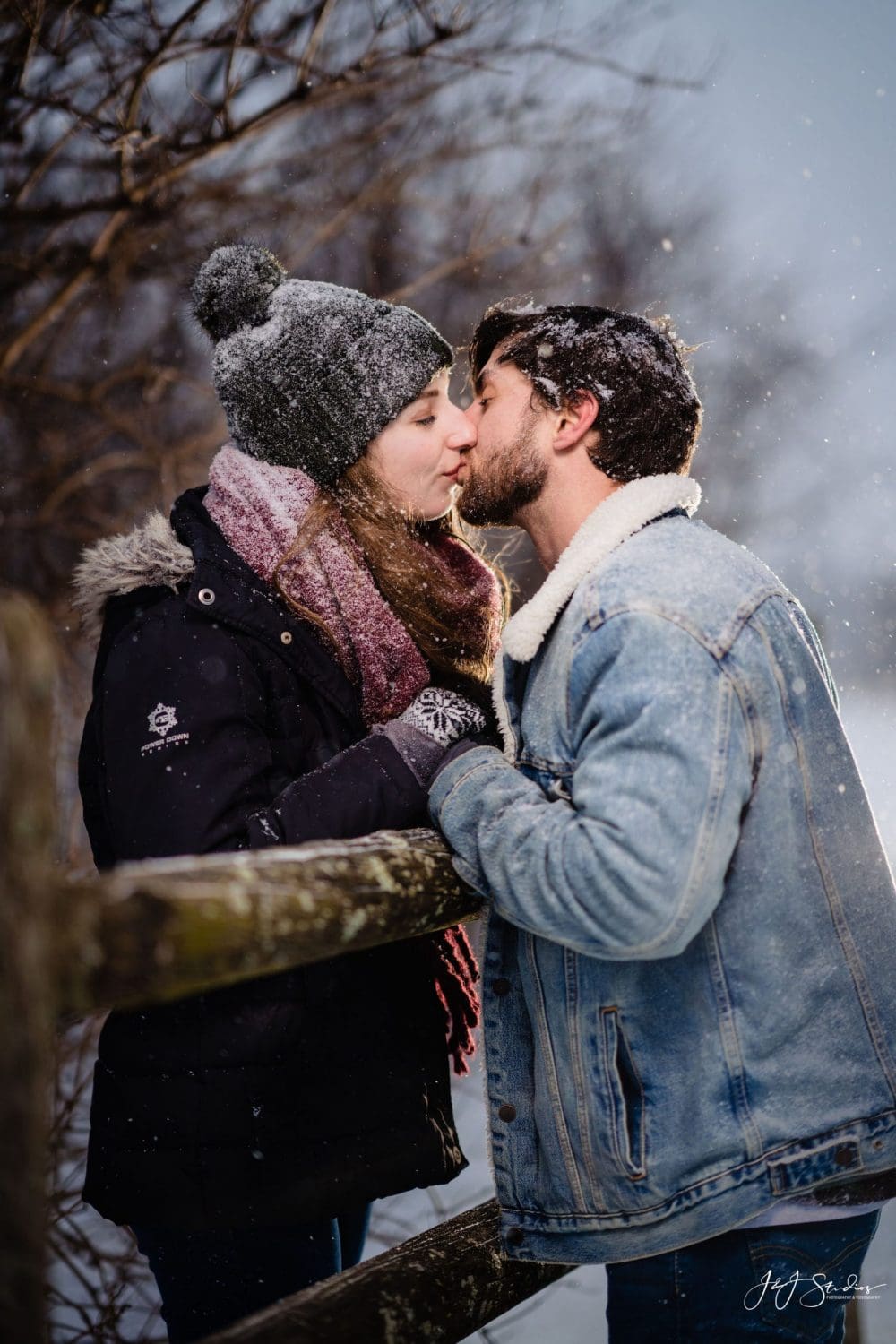 In 1876, the state of Pennsylvania bought the land and built the Norristown State Hospital. The hospital also housed a program that trained farm managers, and became a place for “alternative service” for those whose beliefs prohibited them from serving in the military. Patients at the hospital raised animals and farmed the land until 1975, when it was discovered that farming did not help patients recover. It was also cheaper to buy food than to have the patients grow it themselves. In 1992, Montgomery County leased 600 acres of the land and created present-day Norristown Farm Park.

Norristown Farm Park is one of the last undeveloped areas in Montgomery County, PA. Visitors can even view a working farm on their sojourns throughout the park. A tenant farmer even farms four hundred and fifty acres of the land today! The crops include corn and soybeans, and also help subsidize the costs of running the park. 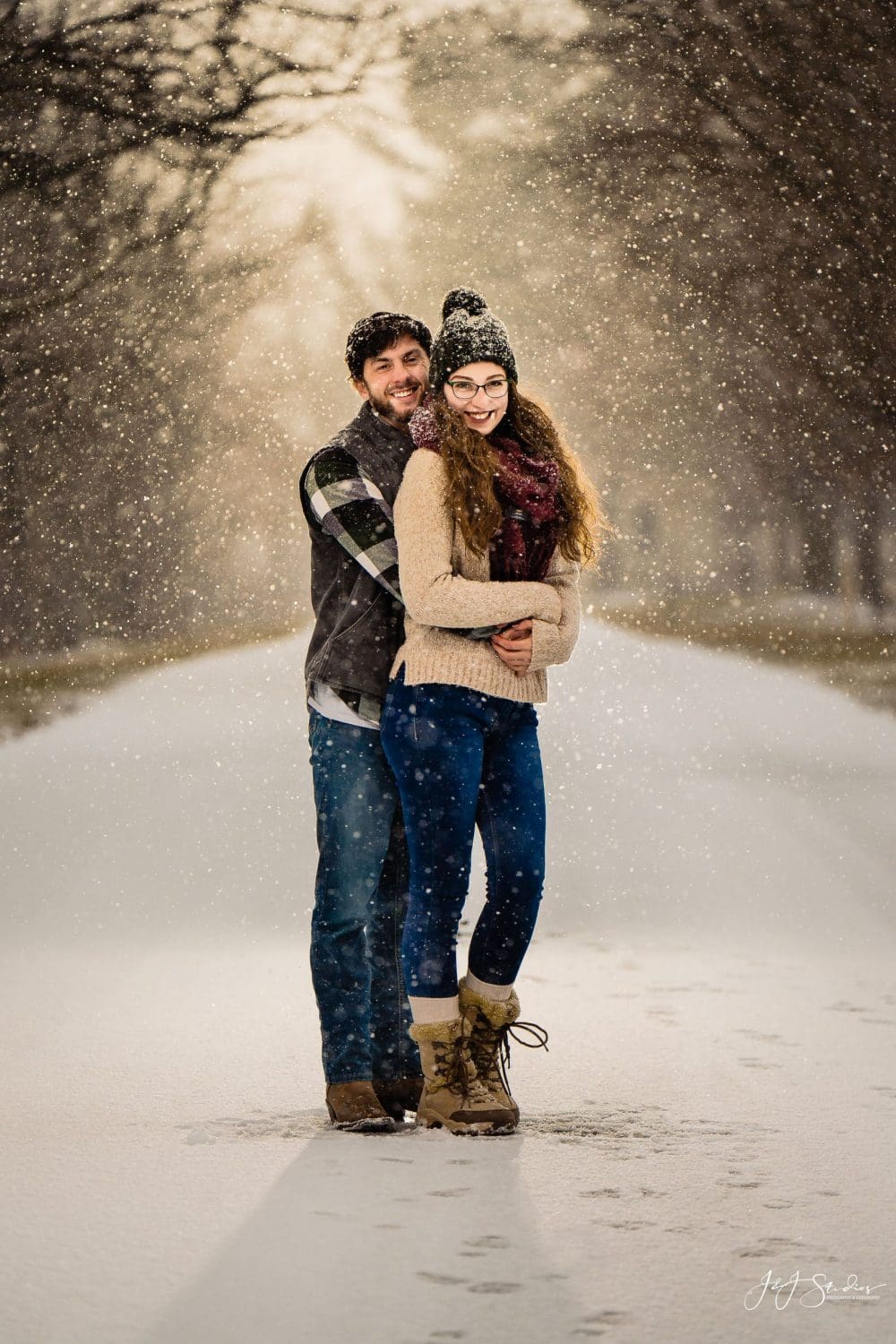 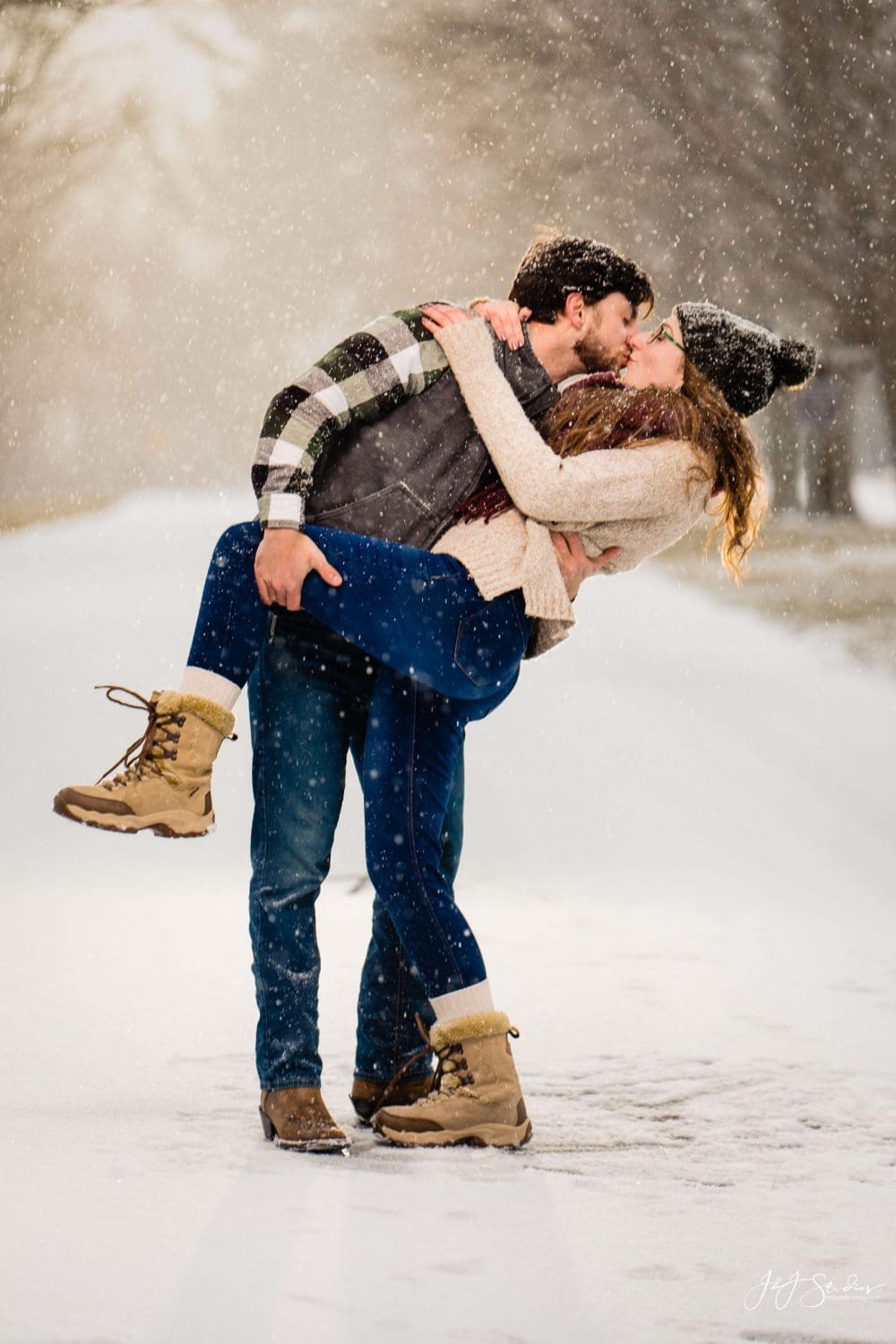 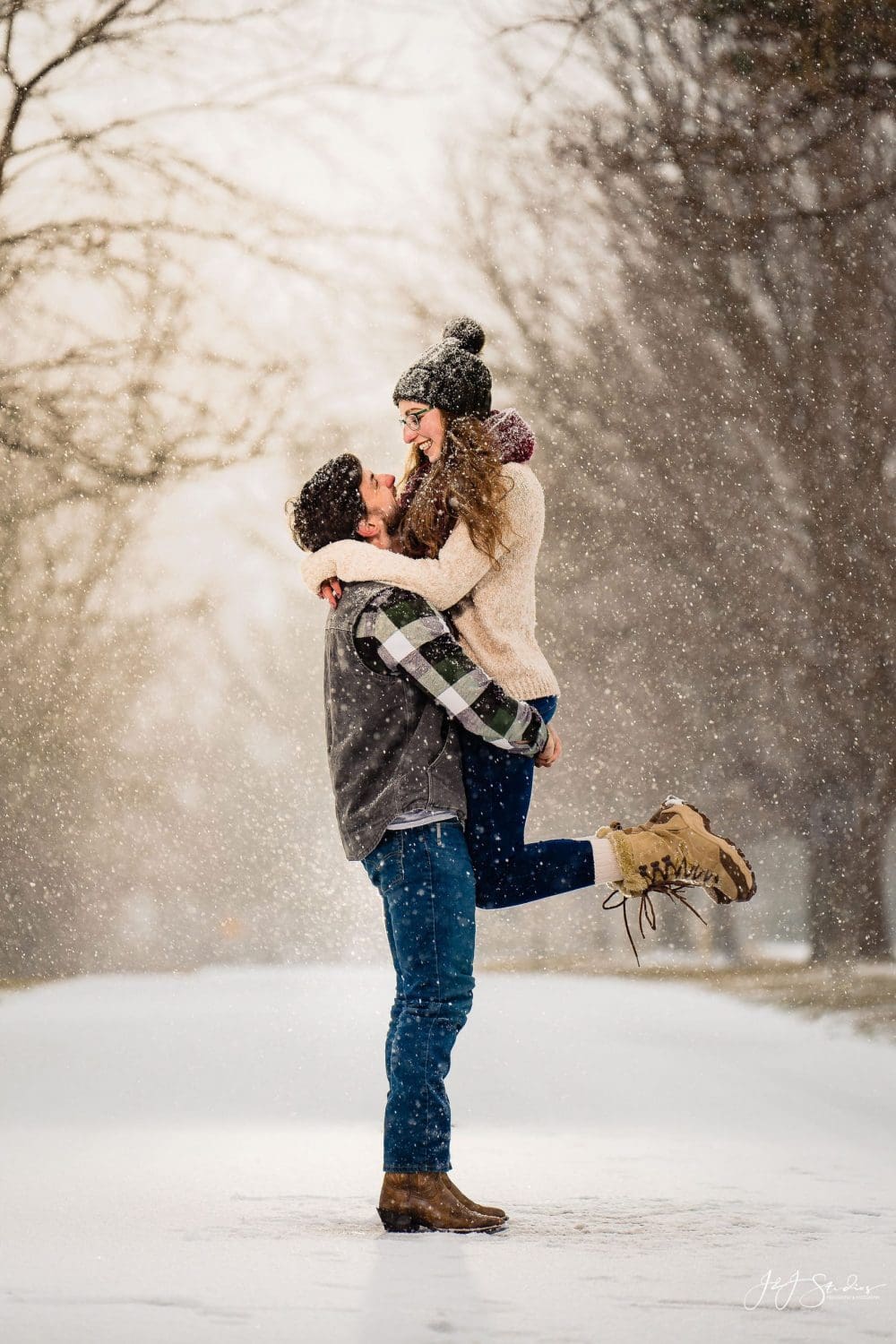 Don’t let Hollie fall, Evan – unless it’s more in love with you! 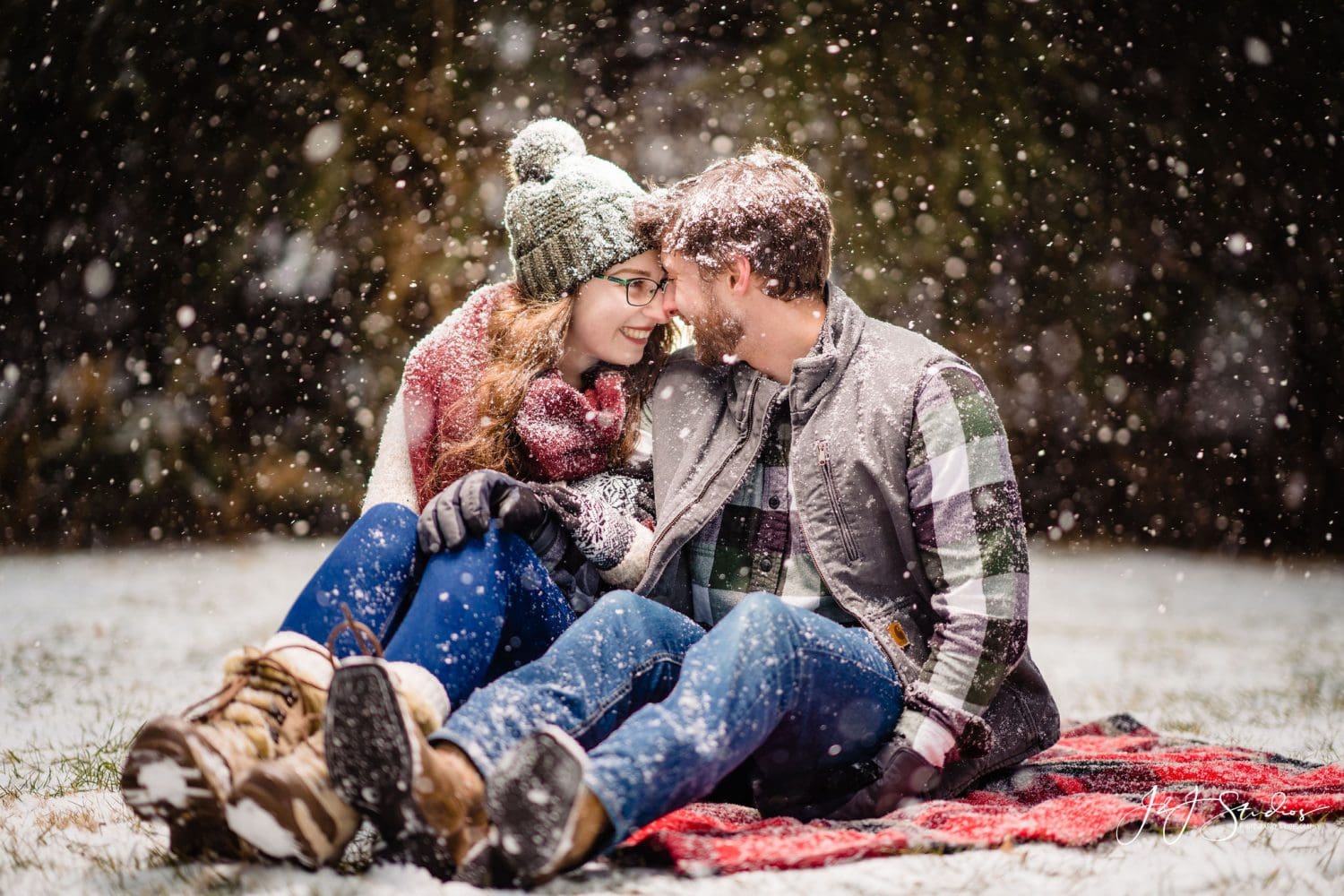 J & J Studios is thrilled with this photo. It looks like there’s a halo around Evan and Hollie made of light and snowflakes!

The love Hollie feels for Evan is crystal clear in this picture of the two of them sitting on a park bench. 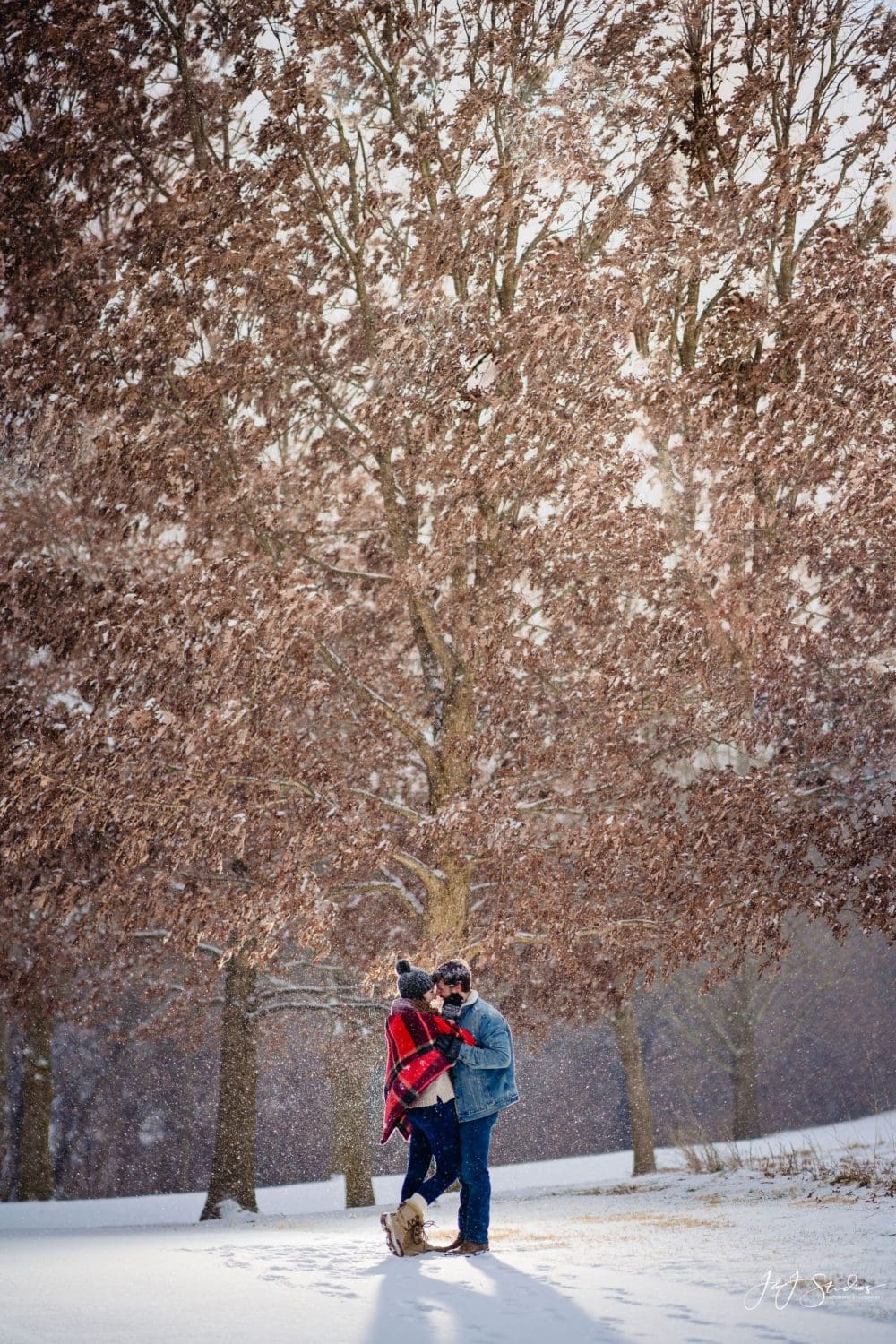 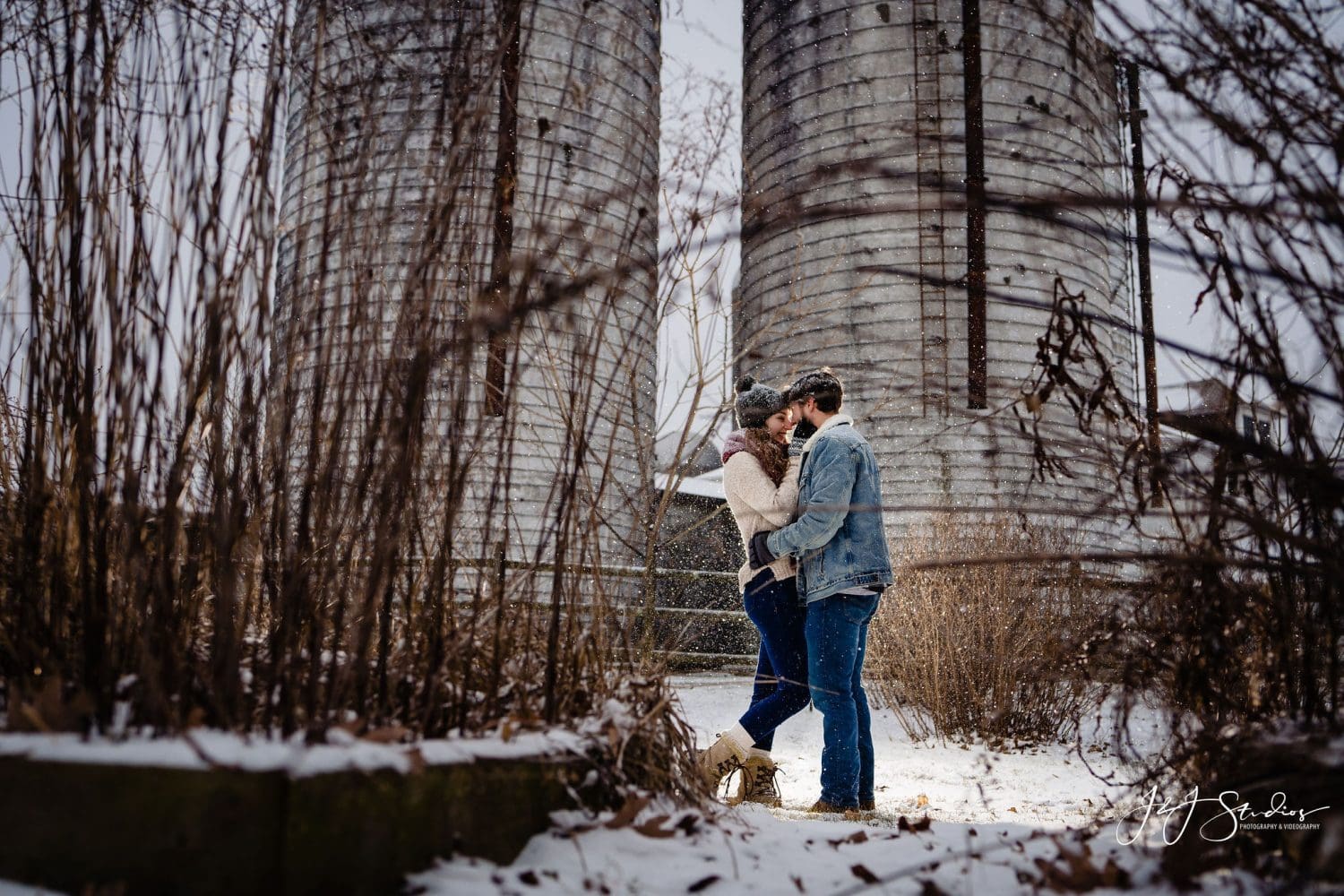 We love this photo of Evan and Hollie cuddling beneath a tree in the falling snow. Though we’re also partial to the picture of the two of them with the silos in the background! 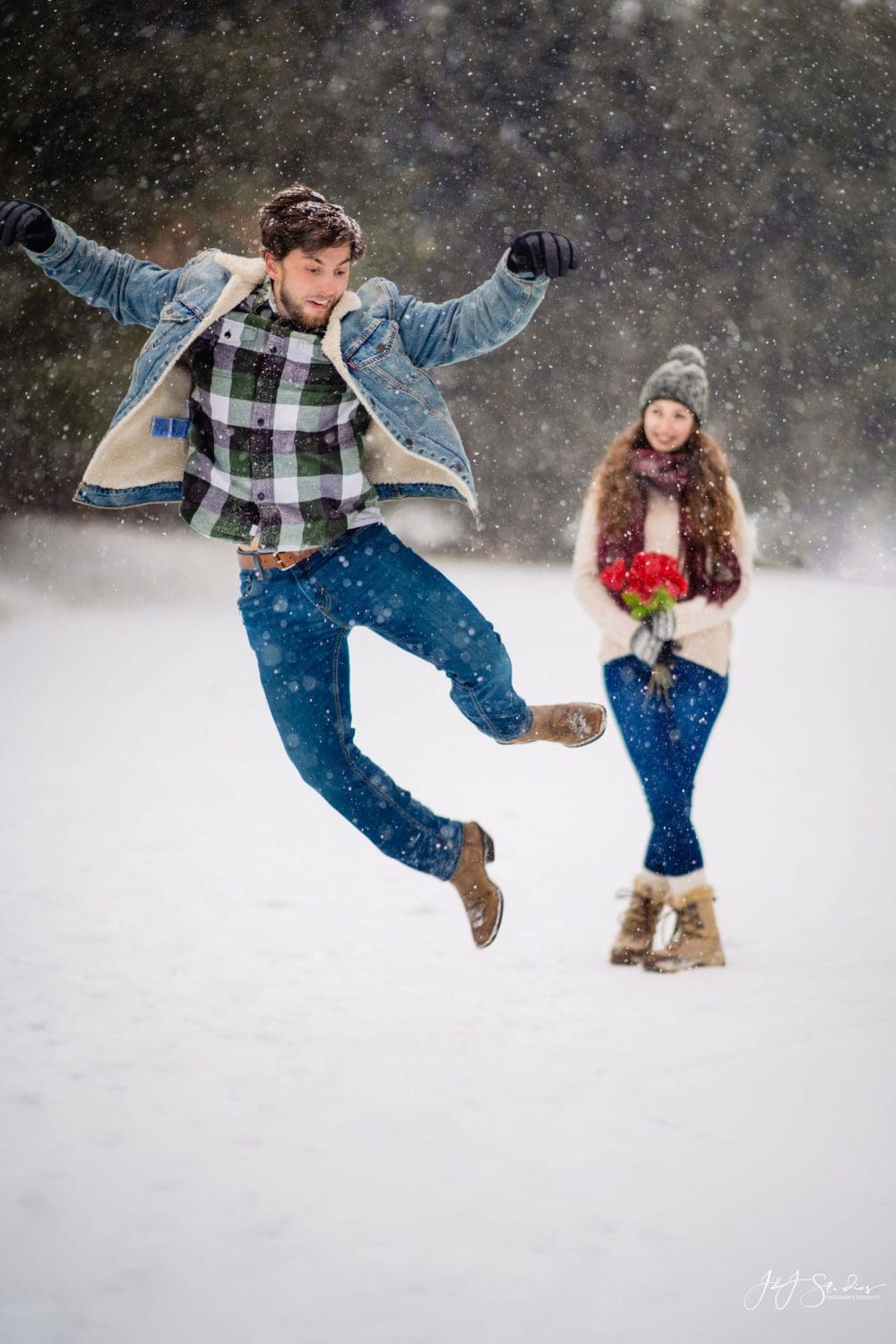 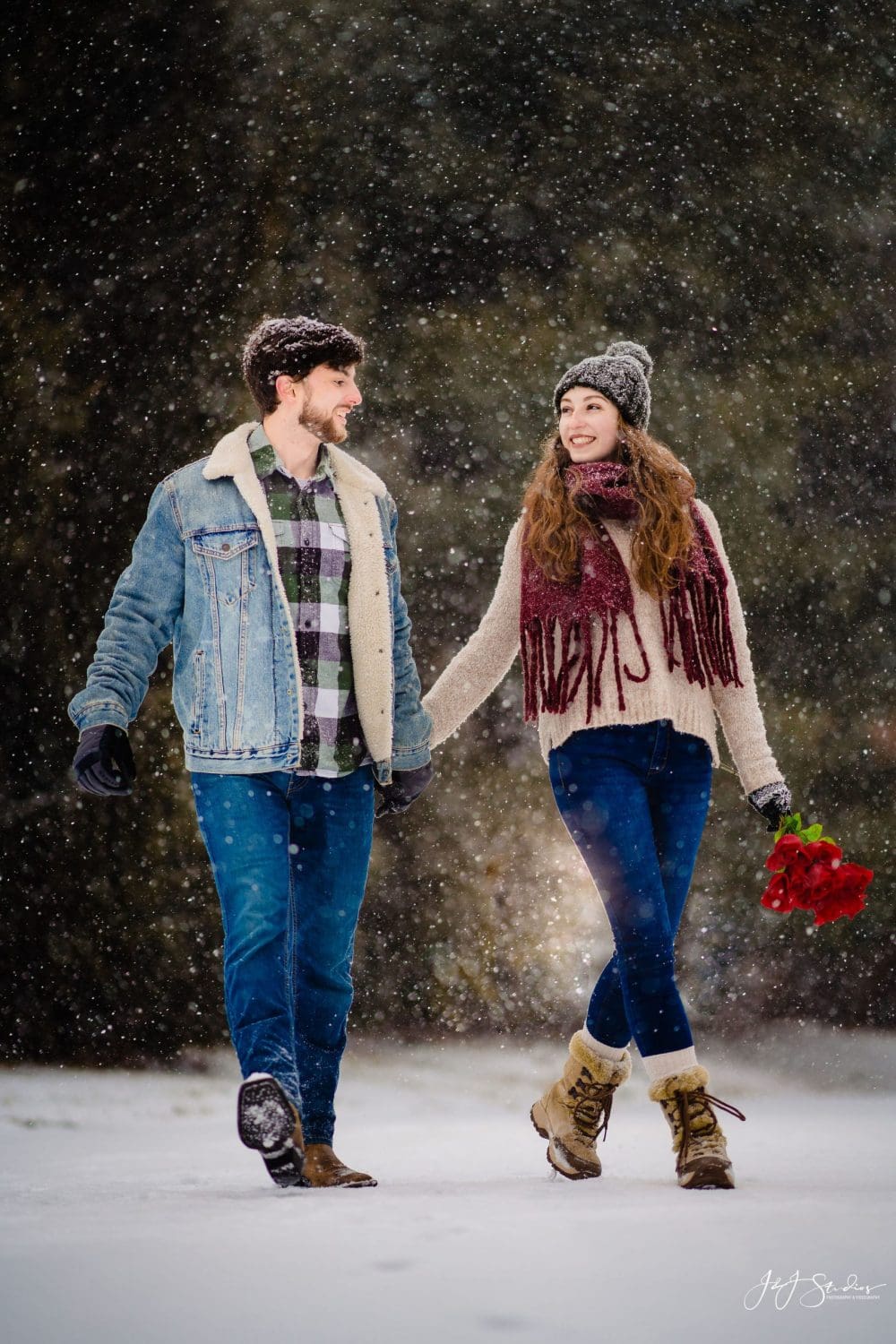 Evan’s jumping for joy! We love the splash of red from the roses Hollie is holding in these pictures. The color adds a punch to a couple of already sweet shots! 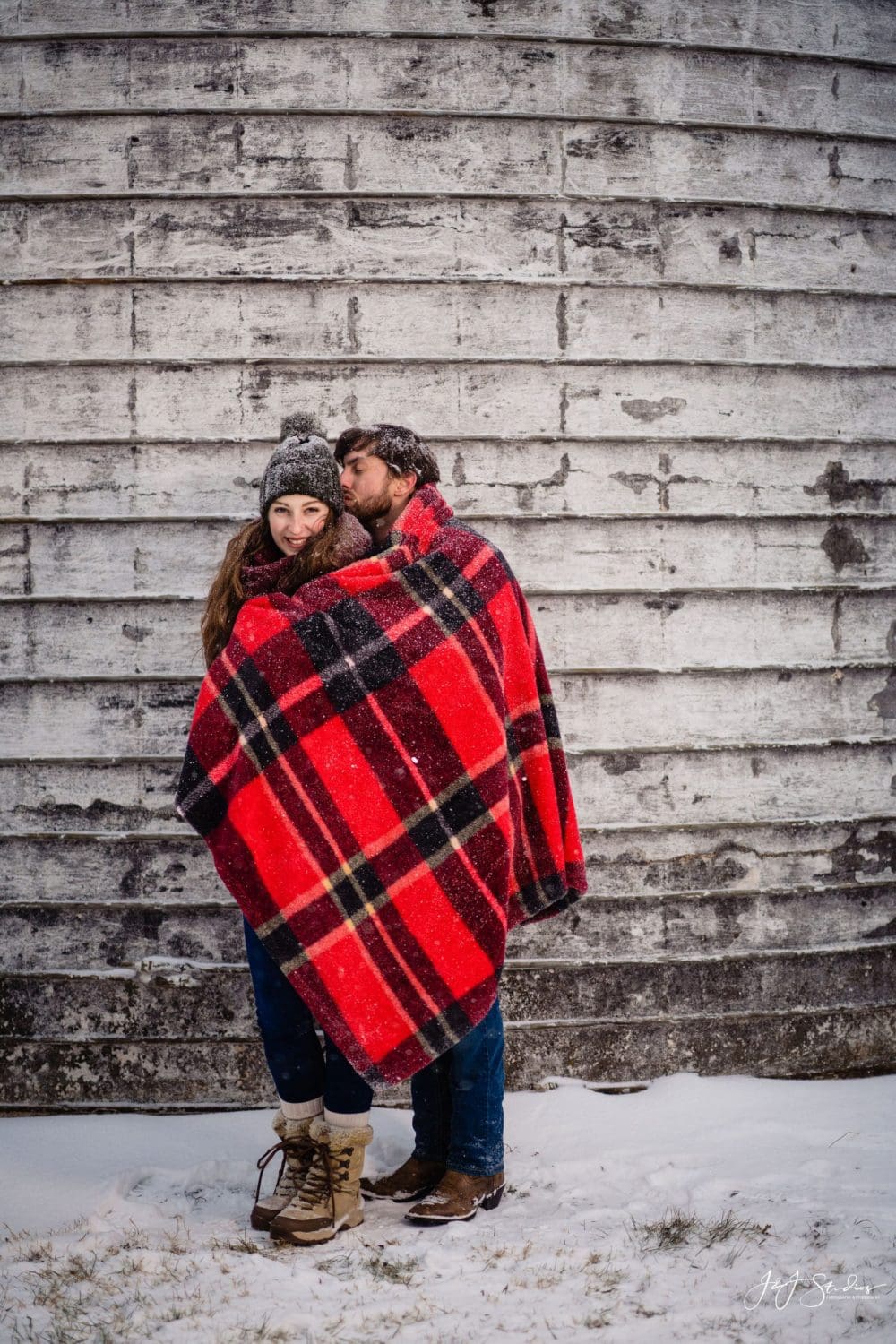 Brrr! Hollie and Evan were definitely grateful for this vibrant blanket on such a winter’s day. Plus, it makes for some adorable shots that warm the heart! 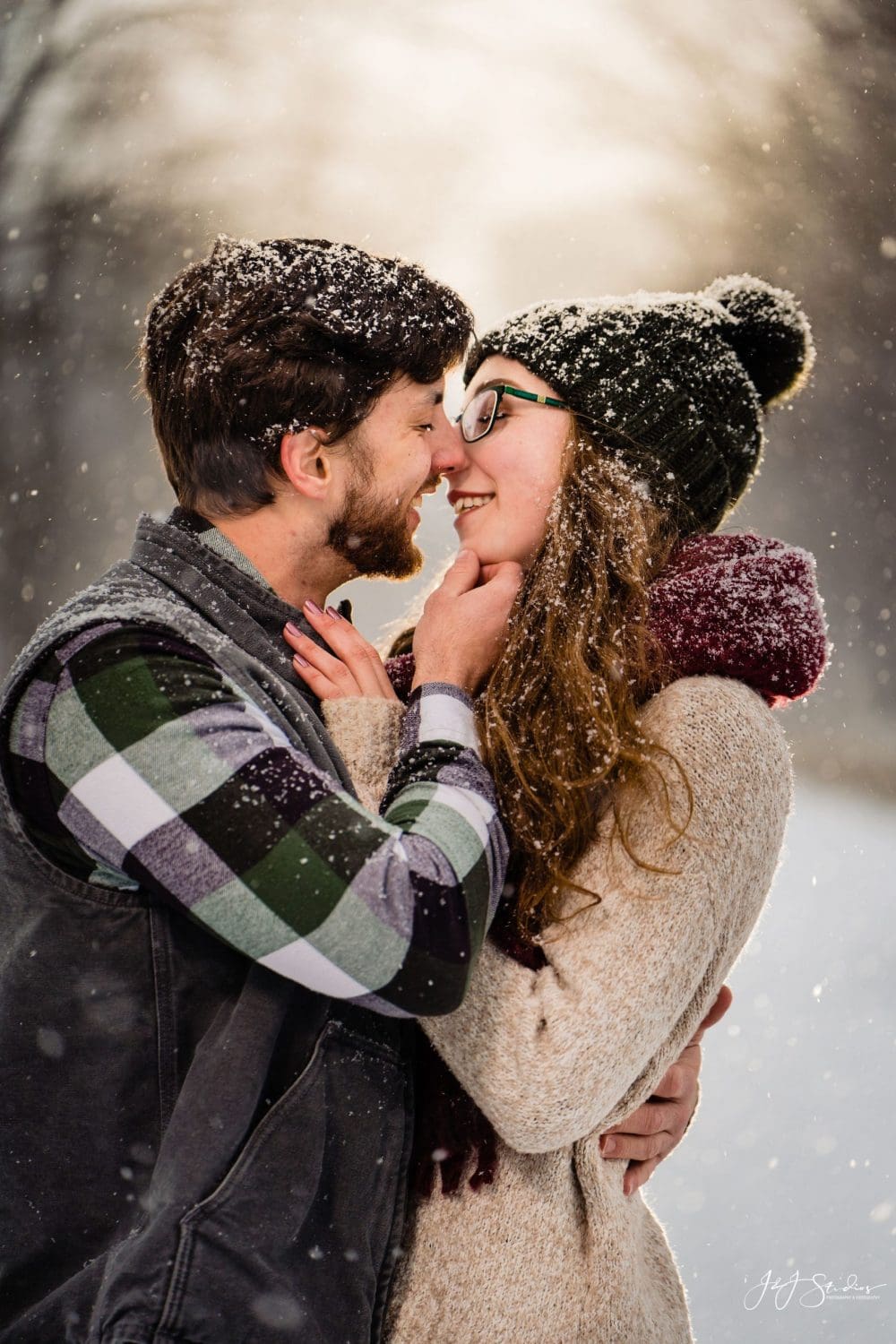 If you have an idea for a winter engagement photography session, we’d love to make that happen for you! Contact J & J Studios today – we’ll brave the cold and snow for you!