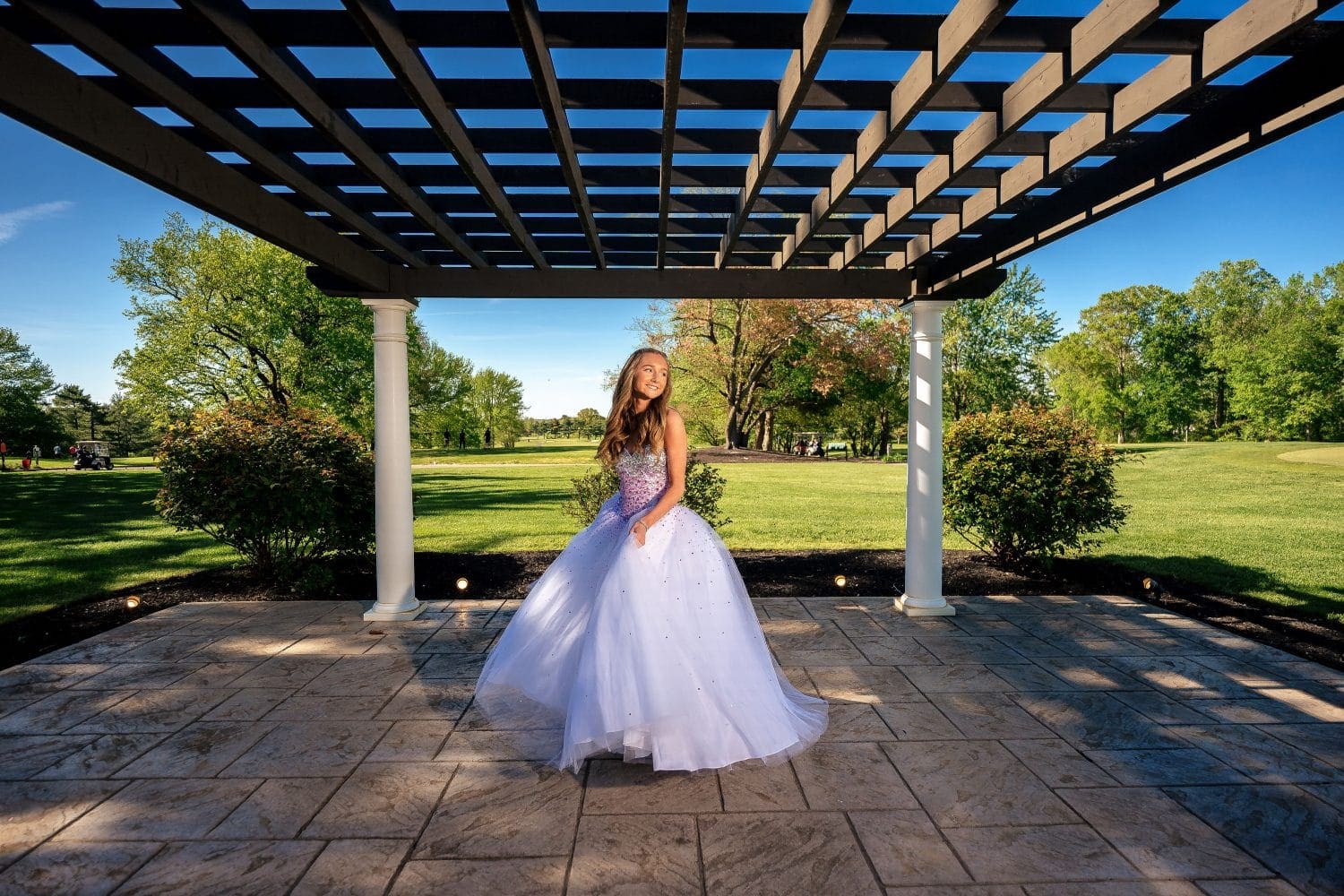 On a gorgeous afternoon in early May 2021, Ava celebrated her birthday by becoming a bat mitzvah. Her lovely bat mitzvah ceremony and the lively and fun-filled party afterward took place at Ramblewood Country Club in Mount Laurel Township, New Jersey. J & J Studios had a lot of fun capturing this momentous occasion for Ava and her family! 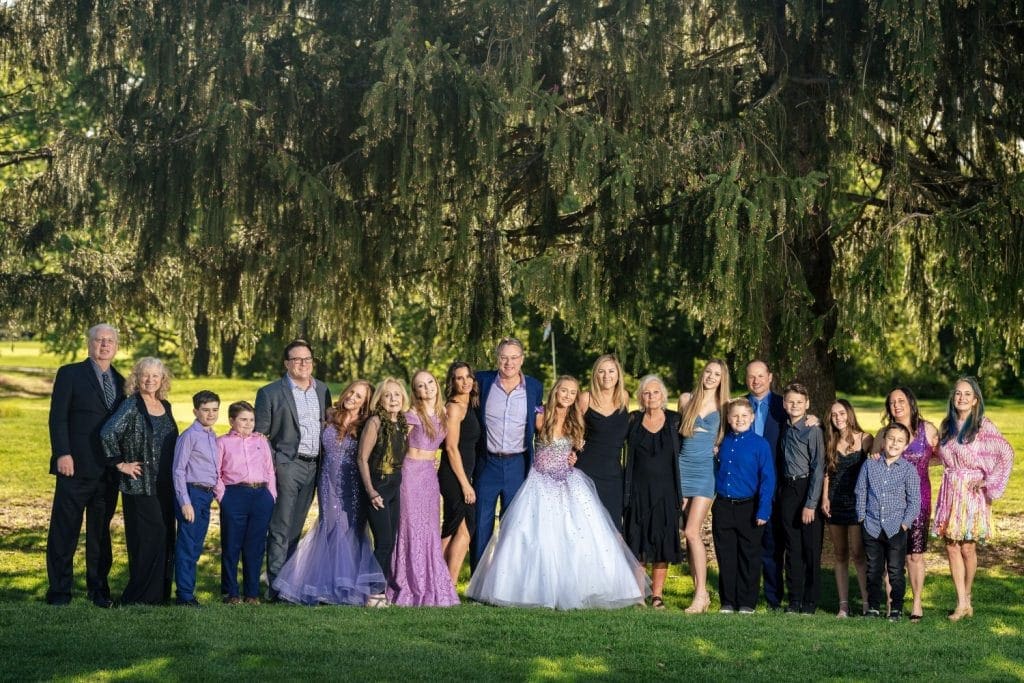 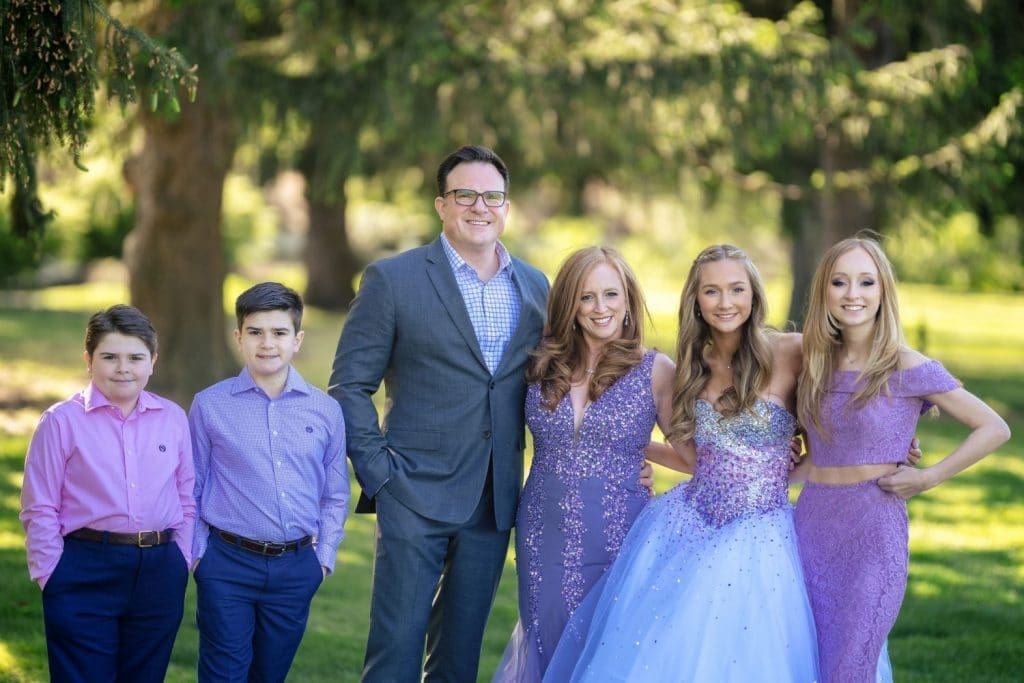 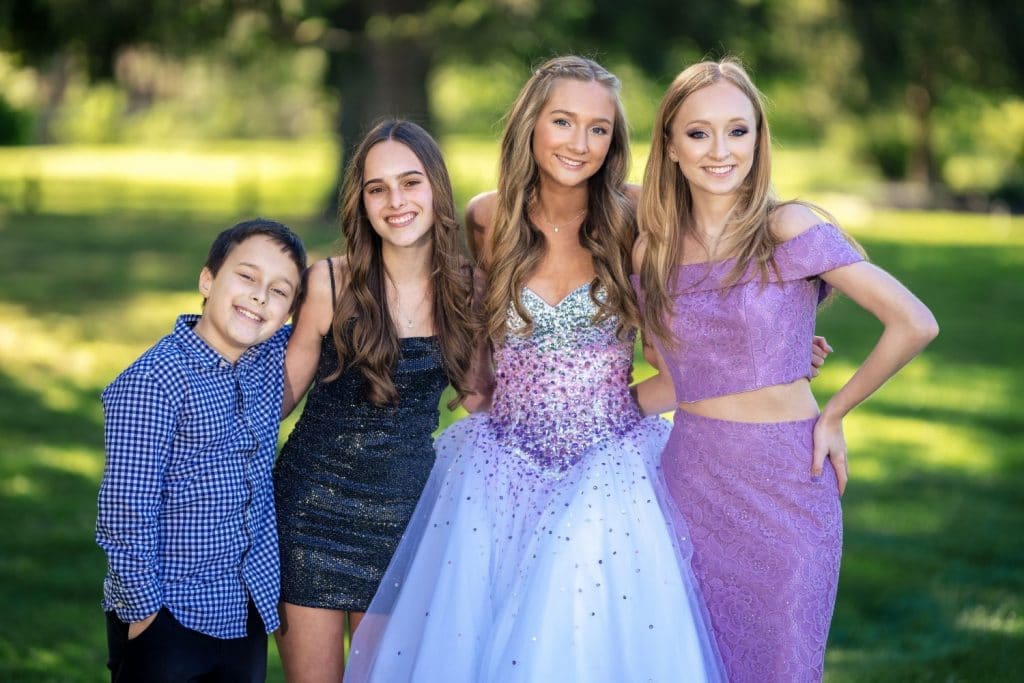 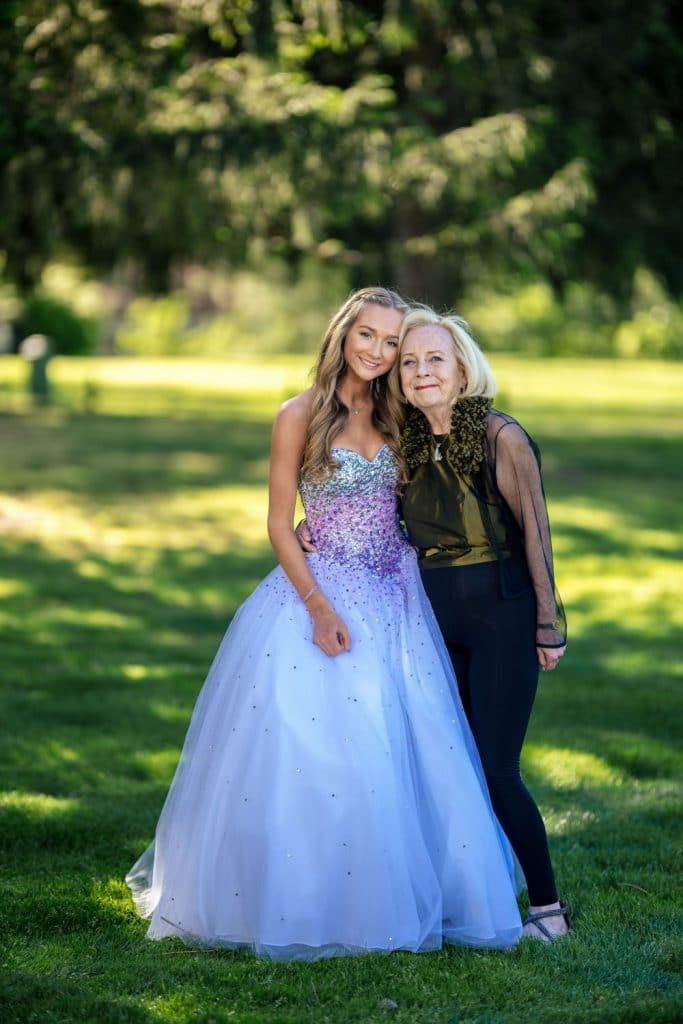 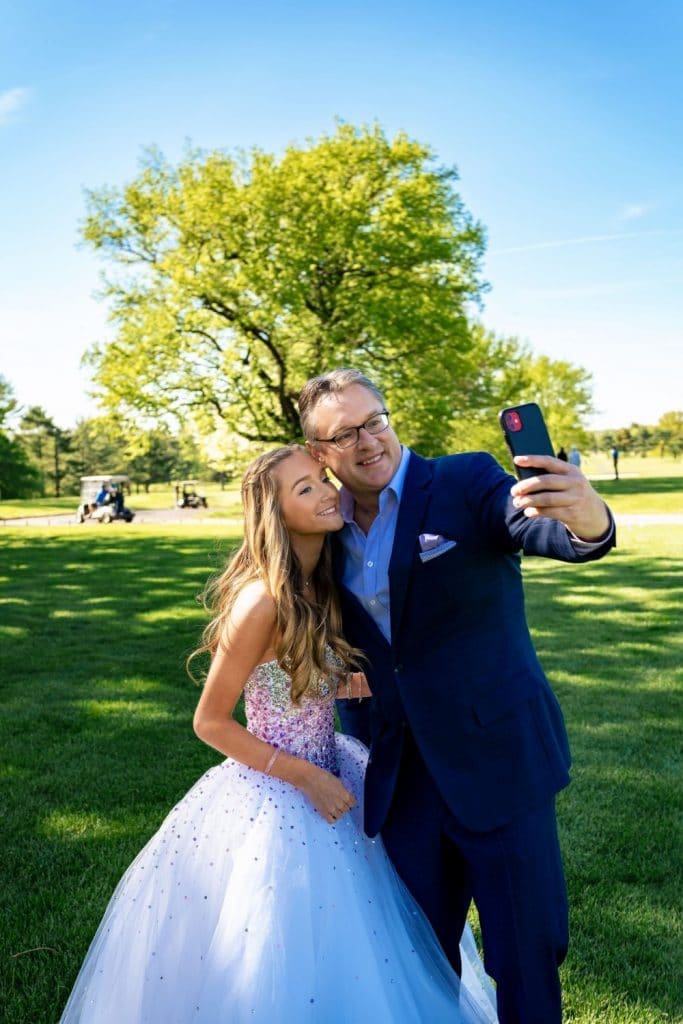 What Is a “Bat Mitzvah?” 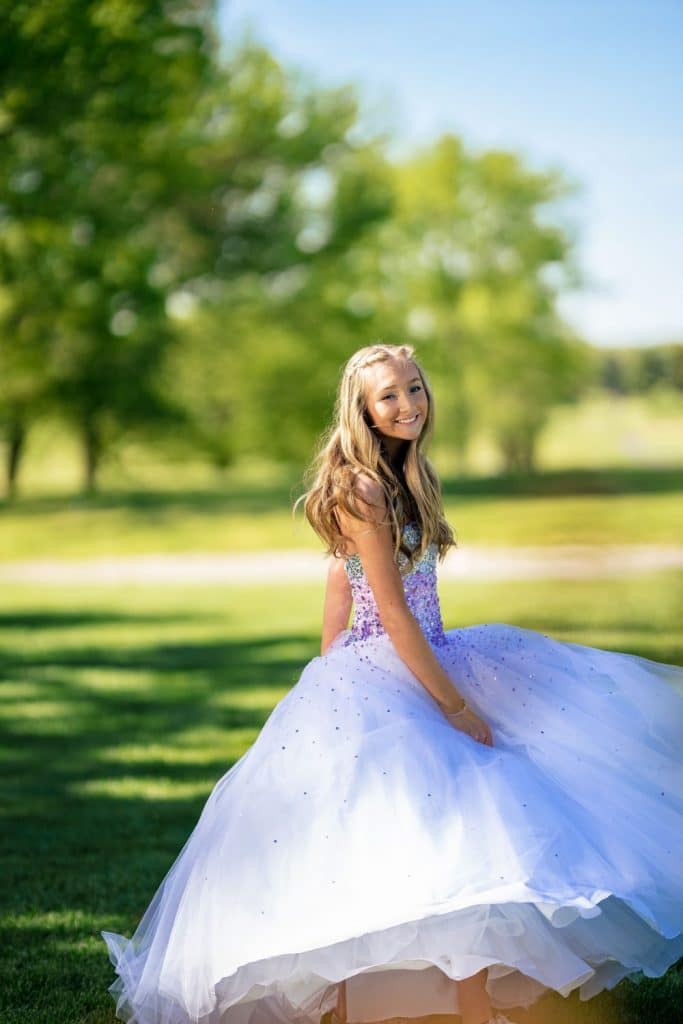 The female counterpart to the bar mitzvah is known as the bat mitzvah. Though less widely known, this is just as momentous an occasion for young women of the Jewish faith. While bar mitzvahs are celebrated around the time a boy turns thirteen, bat mitzvahs can be celebrated around a Jewish girl’s twelfth or thirteenth birthday. Bat mitzvahs are typically practiced only in Reform or Liberal Jewish communities. “Reform” and “Liberal” are the identifiers of two of some of the different sects within the larger spectrum of the Jewish faith. 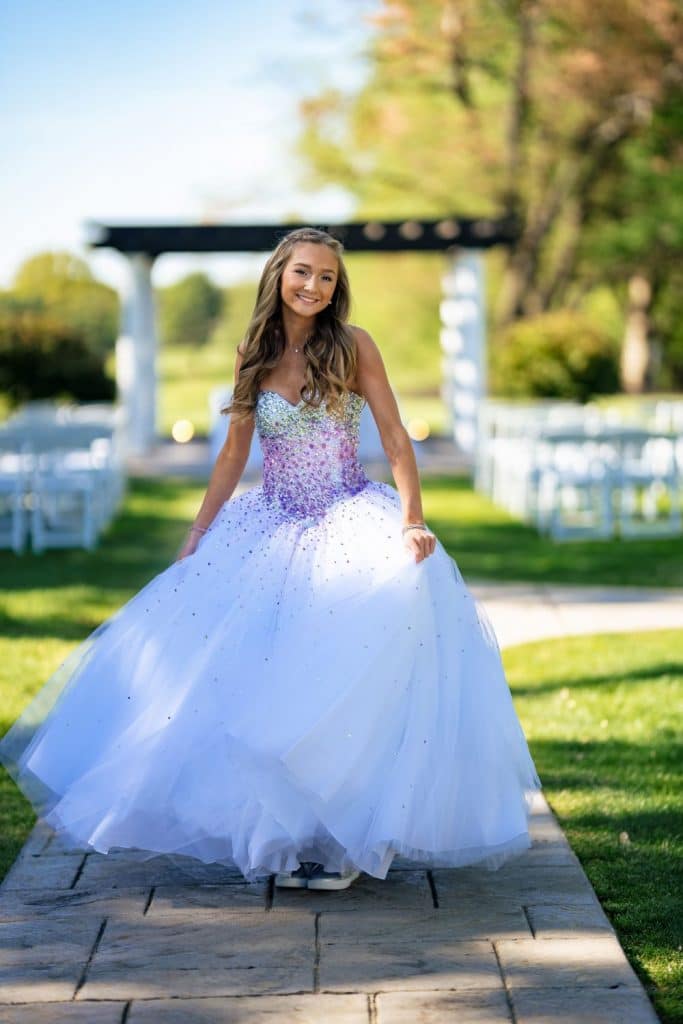 The Meaning of “Bat Mitzvah”

Bar and bat mitzvahs are not only birthday celebrations. They are also solemn spiritual occasions. The phrase “bar mitzvah” is actually a noun describing the boy himself. “Bar mitzvah” translates roughly to “son of the commandment.” “Bat mitzvah” has a very similar meaning: “daughter of the commandment.” Both phrases are a means of referring to a boy or girl who has come of age, which is another way to say that they have reached adulthood. 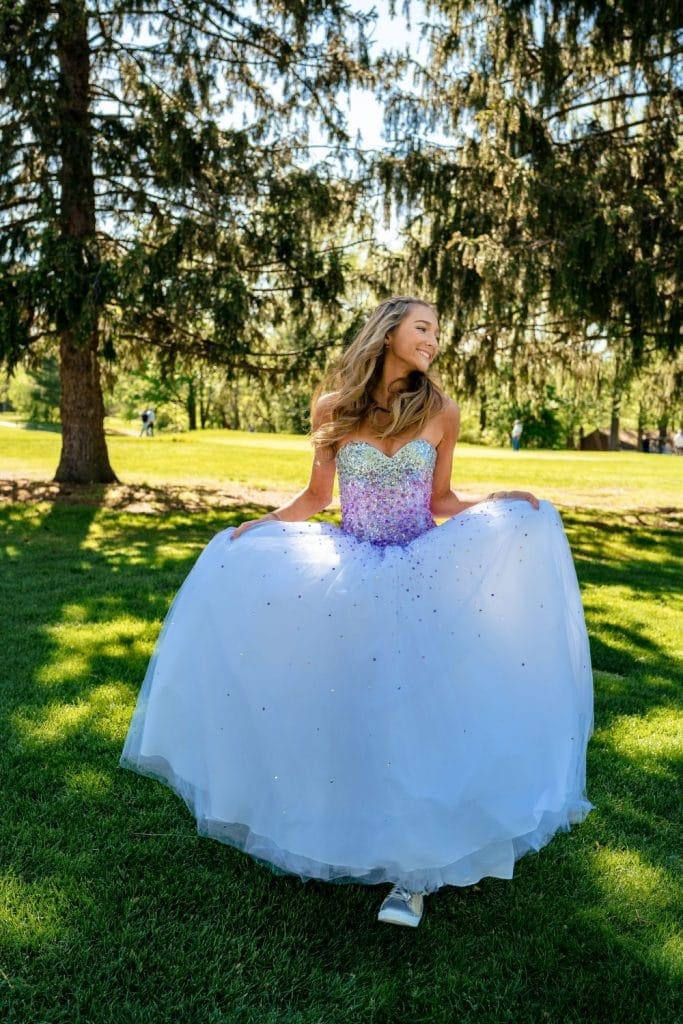 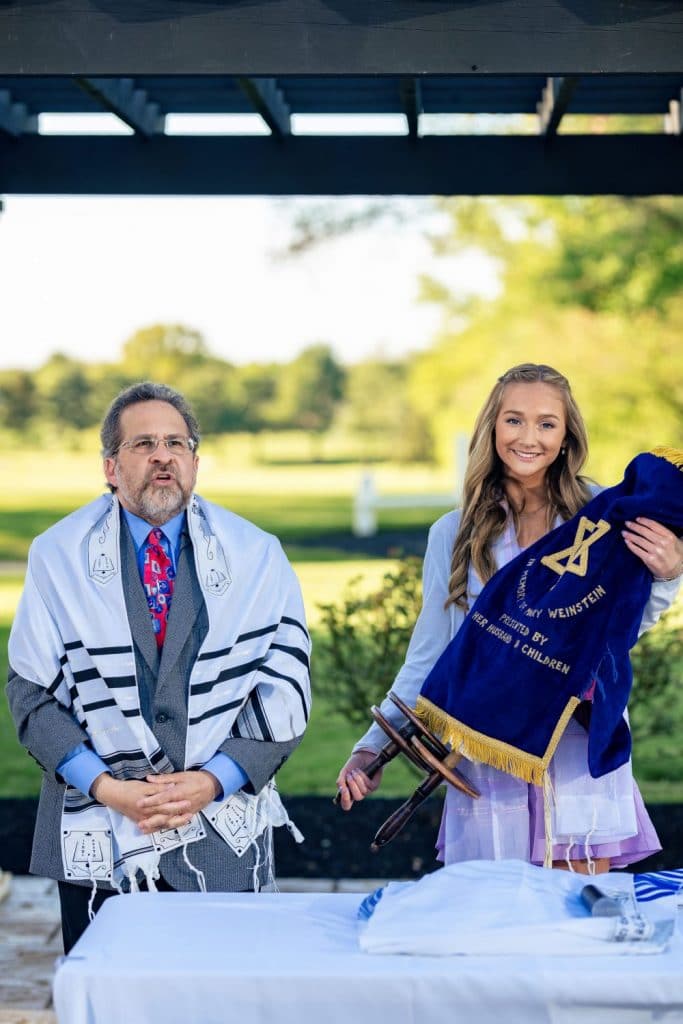 It’s important to understand that bat and bar mitzvahs are not equivalent to a graduation from Judaism. Instead, they are considered to be the beginning of a full spiritual life of an adult who practices Judaism. Bat and bar mitzvahs are a young woman or man’s initiation into the Jewish faith and its practices as an adult. They assume repsonsibility, yes, but also the rights to participate fully in their community as a fellow adult. 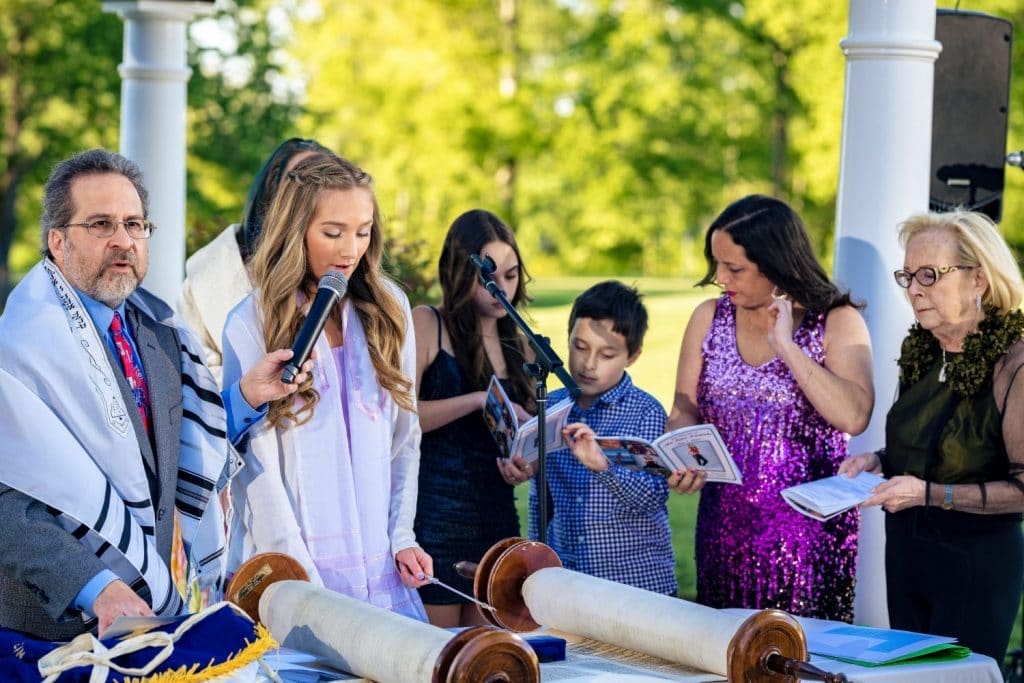 The History of the Bat Mitzvah

Interestingly, there are no historical records of the bar mitzvah before the Middle Ages in Europe. However, the bat mitzvah, the female counterpart to the bar mitzvah, has an even shorter history. Bat mitzvahs are mentioned in writing as early as the late nineteenth century in Baghdad, in modern day Iraq. Bat mitzvahs were also celebrated, more or less, in France and Italy before they were celebrated in the United States. 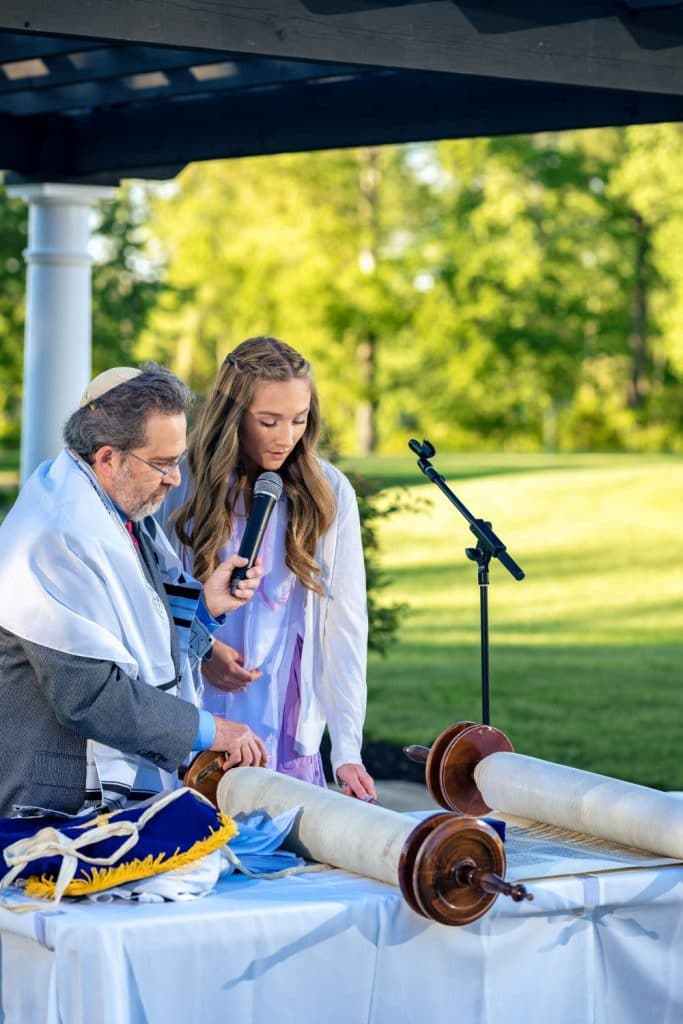 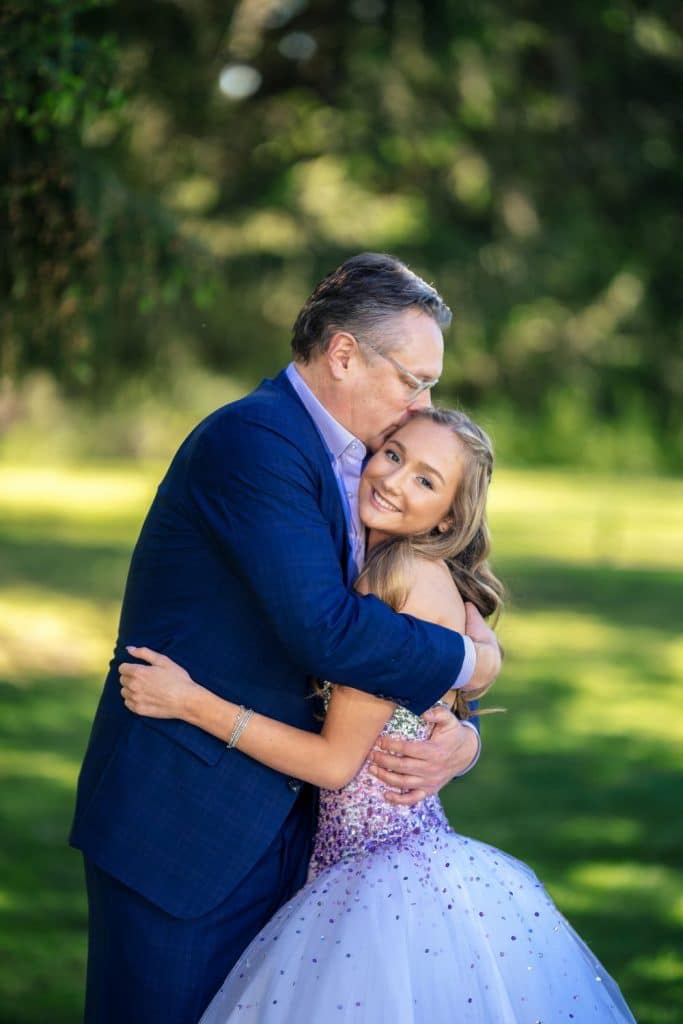 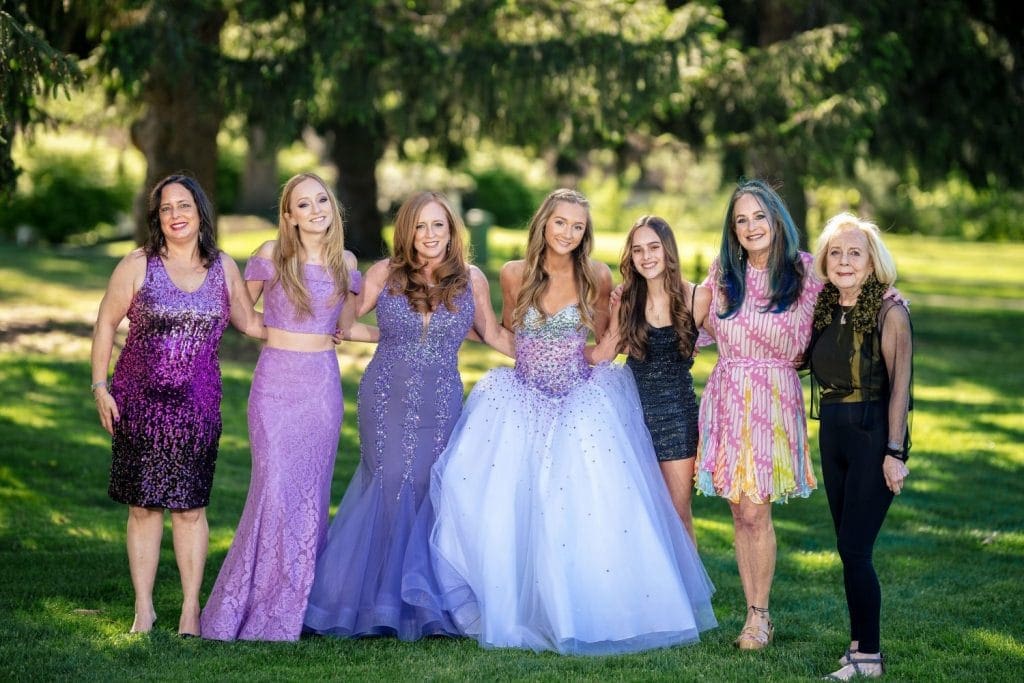 Preparing to Become a Bat or Bar Mitzvah

Future bat and/or bar mitzvahs prepare for this momentous spiritual occasion for many months before the official ceremony. Usually, approximately nine months of preparation are recommended for future bat or bar mitzvahs to ready themselves for this ceremony and celebration. 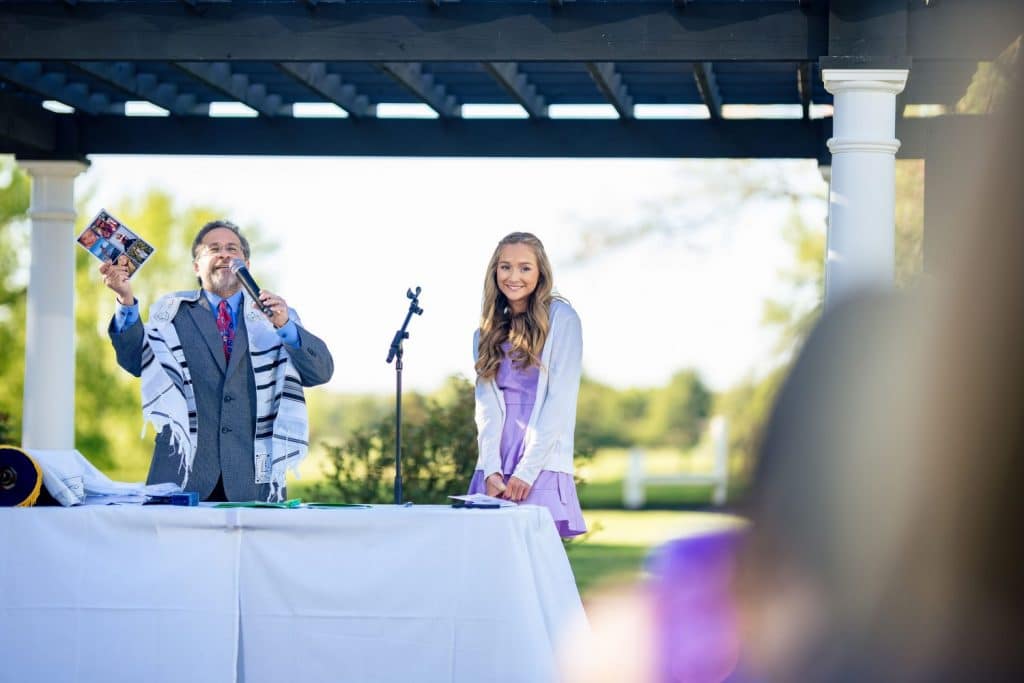 It is also customary for a bat mitzvah to prepare a speech for her guests. This speech is one way that the bat mitzvah is encouraged to begin and to continue the tradition of sharing the message of the Torah with others. 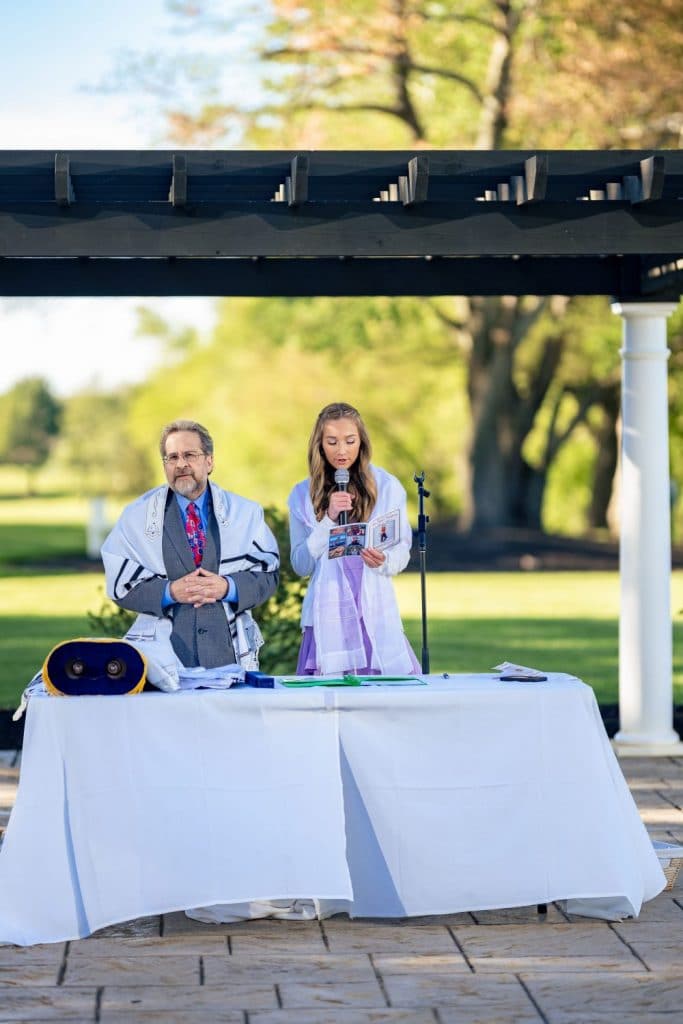 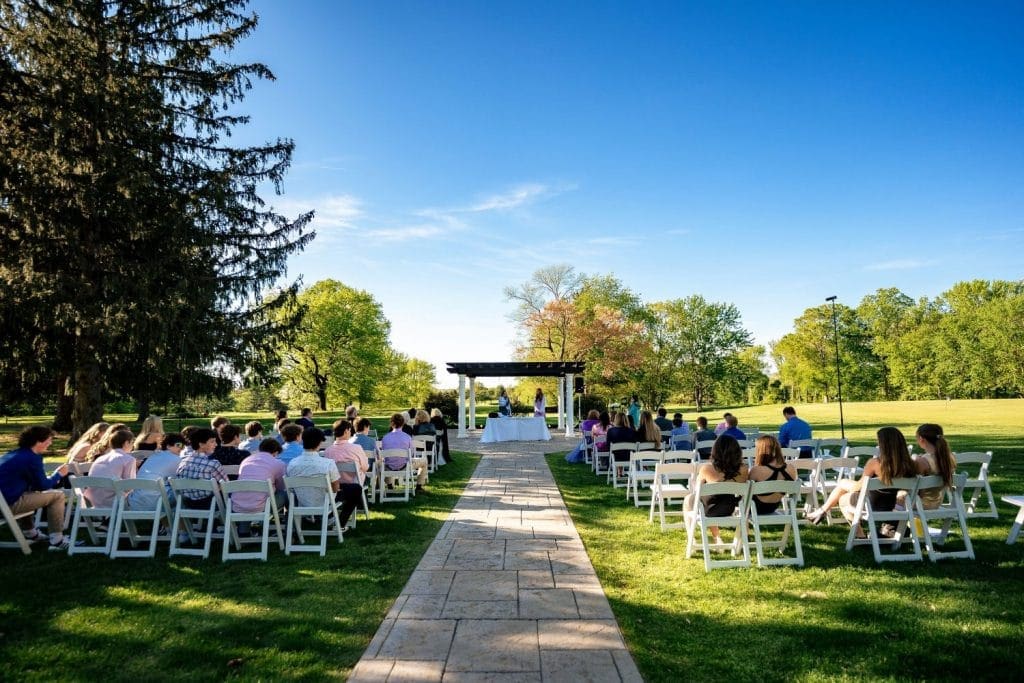 Ramblewood Country Club’s ballroom boasts modern chandeliers dripping with crystal, and a wall composed entirely of floor to ceiling windows. These allow guests to view the golf courses and lawns around the main building, and let in natural light at all times of day. The ballroom’s features, plus its size, made Ramblewood Country Club the perfect destination for the bat mitzvah of Ava’s dreams!

J & J Studios Does Videography, too!

In case you weren’t previously aware, J & J Studios also offers videography services in addition to our professional, gorgeous photography. We captured this wonderful video while at Ava’s Ramblewood Country Club bat mitzvah. We’ve included it below for you to enjoy!

Ava wore a beautiful sparkling ball gown for her bat mitzvah. It was a fun and frothy confection of a dress! We especially loved the dropped Basque waist of its bodice. That detail reminded us of medieval dresses, and we loved how unique it was – just like the young woman wearing it! 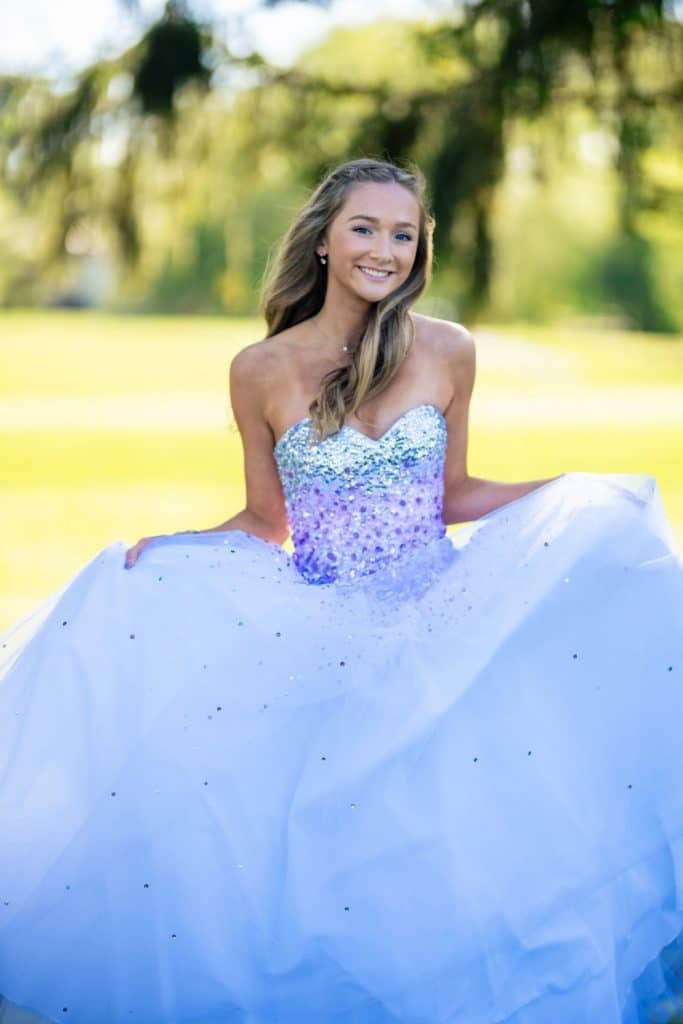 Ava’s bat mitzvah was so much fun for everyone who attended! Here she is with her guests, sharing the microphone as they sing along to the music on the dance floor. 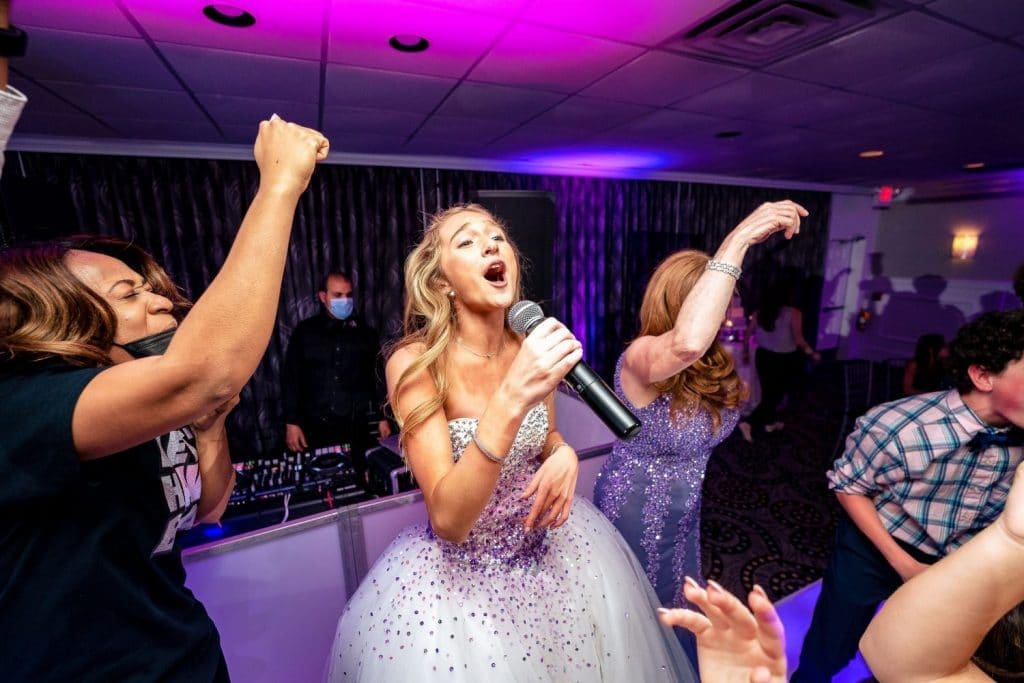 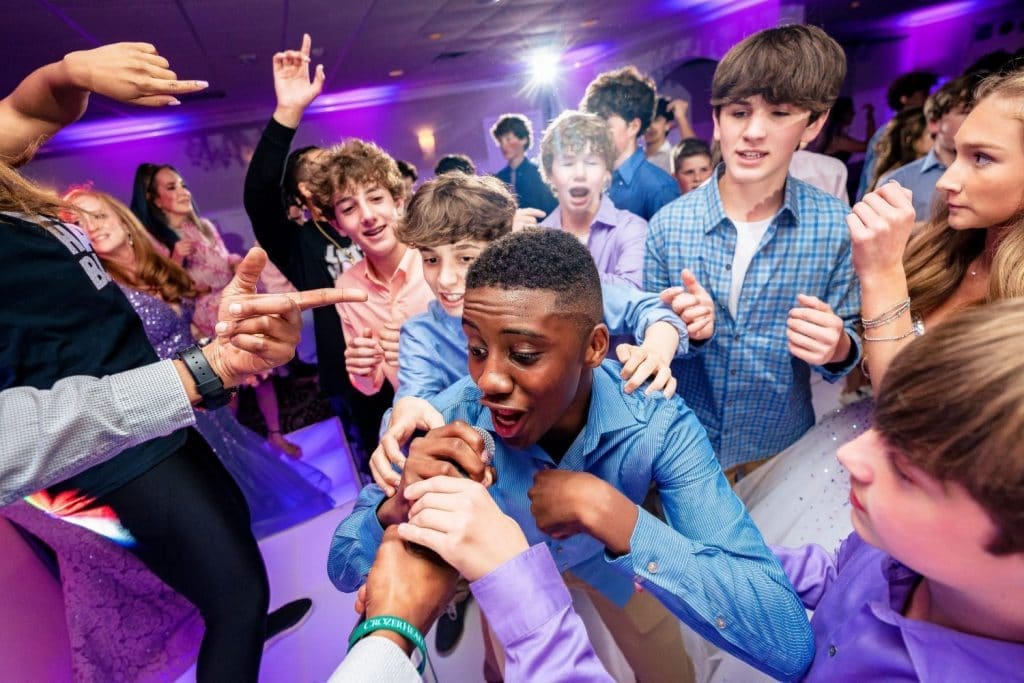 The Hora – a Jewish Celebratory Dance

Ava’s guests participated in a dance called the Hora. The Hora is a traditional dance in Jewish communities, typically danced at celebrations. This dance involves guests gathering in a circle, joining hands, and stepping together in alternating directions.

There are two main reasons that the Hora is included in Jewish celebrations. The first is to prepare the attendants of a celebration to eat by building their appetites. The second is that the Hora can be a fantastic icebreaker, in more ways than one! It can serve as a means to introduce guests who might not have known each other before to one another. Another way the Hora breaks the ice is through introducing a fun activity to the celebration where it is performed. The fun of this dance sets the tone for the event. It also encourages that the fun continue throughout the rest of the celebration! 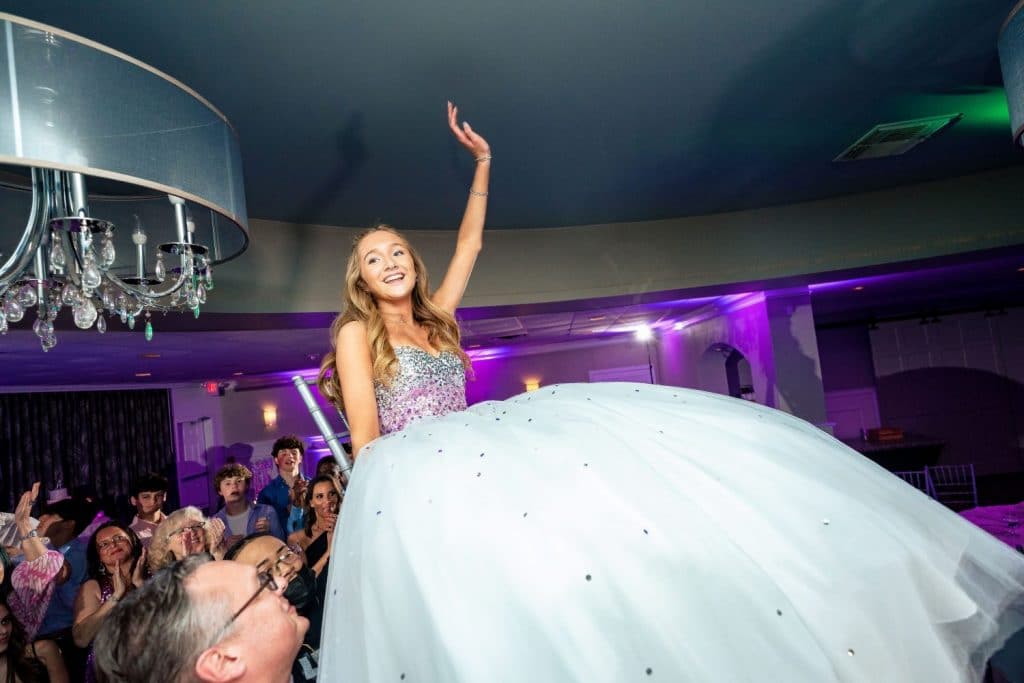 Sometimes, the Hora also involves lifting the guest or guests of honor into the air as they sit on a chair. You may have seen this happen at Jewish weddings, whether in person or in movies or other media. Though the Hora is a Jewish tradition, all guests are not only welcome, but are also encouraged to participate in this joyful dance. 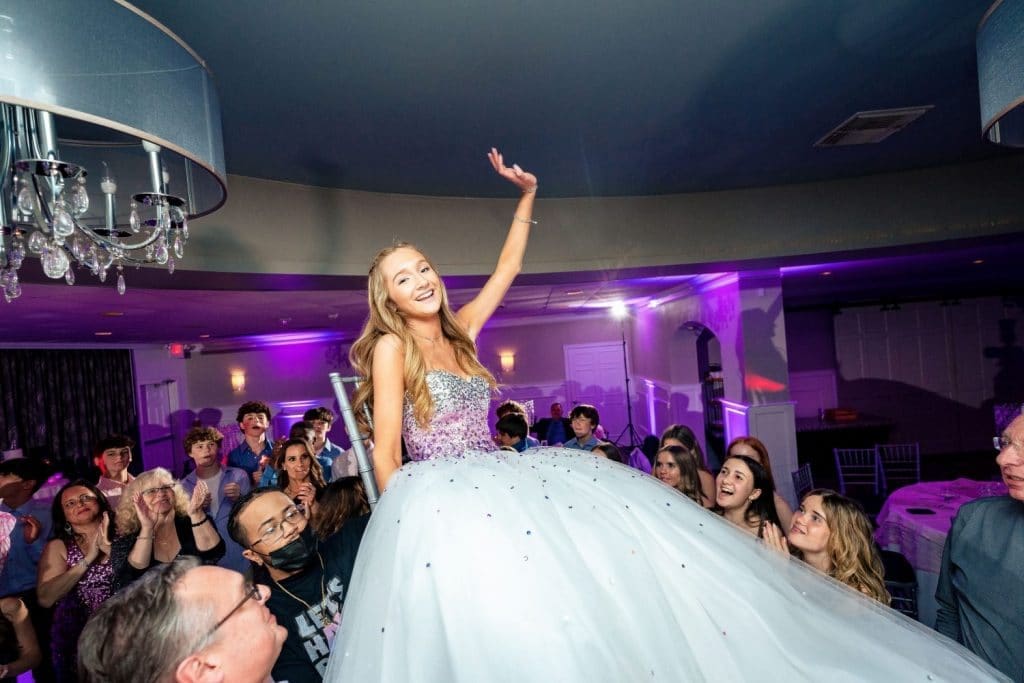 Ava looked like she really enjoyed her time above the crowd – she must not be scared of heights!

Though COVID restrictions had been relaxed before her party, Ava was still respectful of her guests amid the waning pandemic. Instead of blowing out candles atop her birthday cake, Ava blew out candles without the cake below them. Cake or no cake, J & J Studios really hopes her wish comes true! 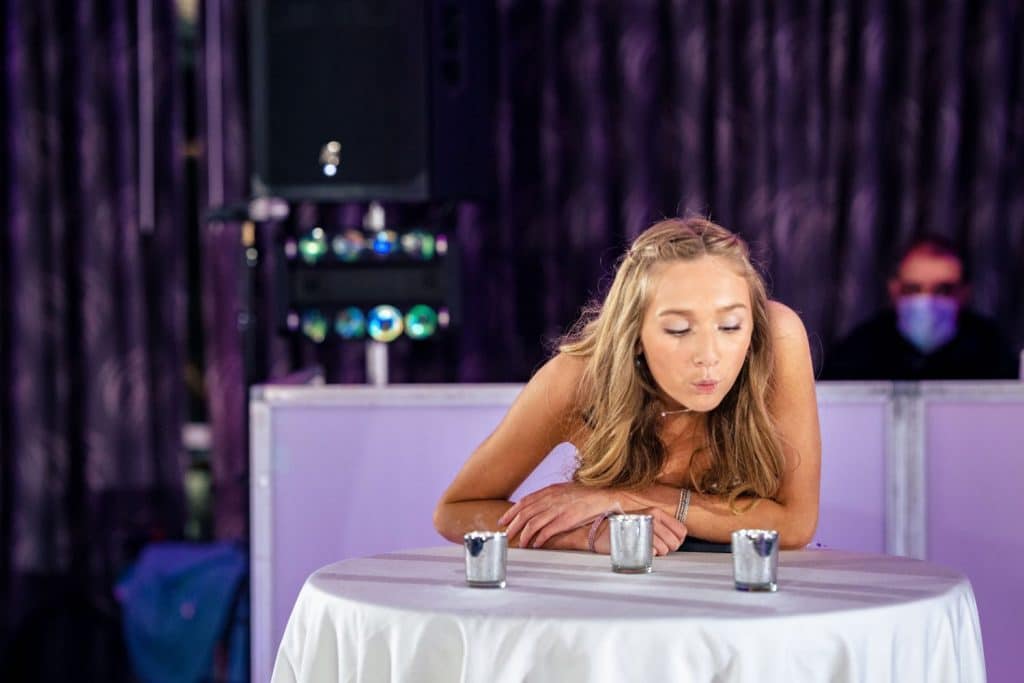 Between the decorations and her dress, the theme for Ava’s bat mitzvah seemed to be all things that sparkle and shine. Ava’s crystal table centerpieces tied in perfectly with both the sparkles of her dress and the crystals on the chandeliers of the Ramblewood Country Club’s ballroom. The party decorations also kept to a color theme of pink and purple. This combination was both a fun and a sophisticated choice! 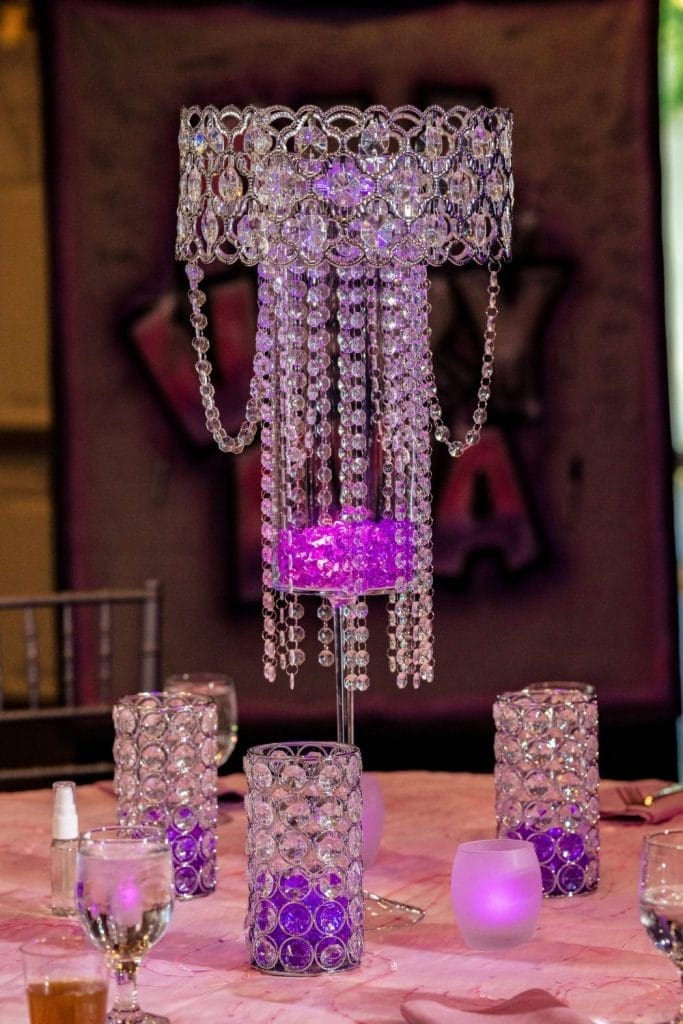 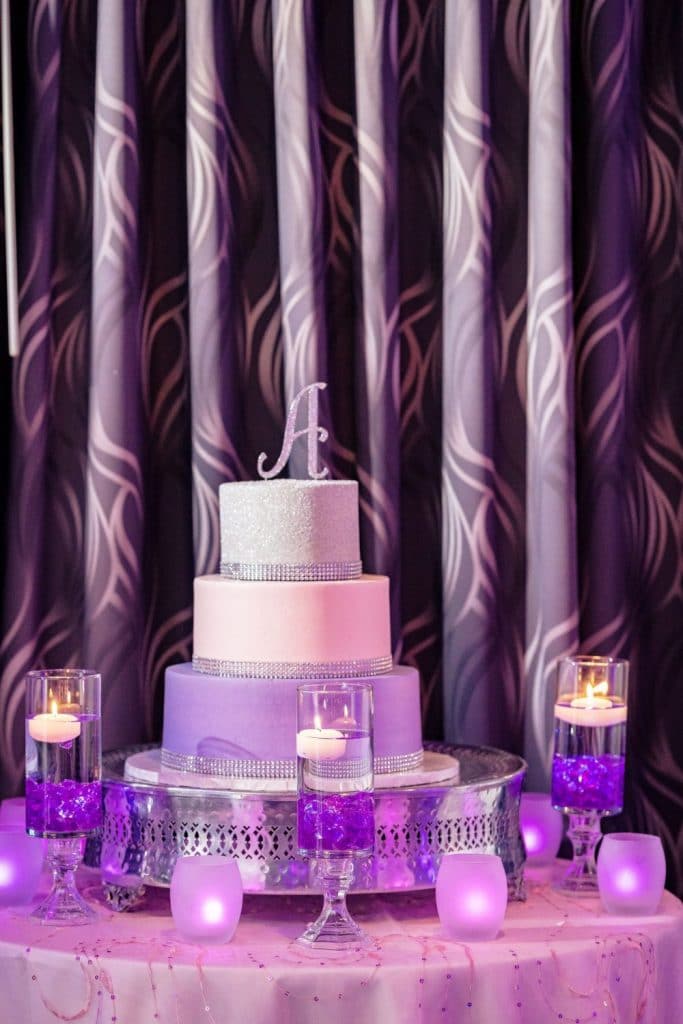 J & J Studios loved Ava’s two backdrops. They were fantastic for taking pictures! The first backdrop reminded us of the red carpet at awards shows. That made Ava’s guests the celebrities attending the event! We’re sure that her guests felt like they got A-list treatment at this wonderful party! The second backdrop was tons of fun, too, with its airbrushed art. Having her guests sign it was a brilliant idea! 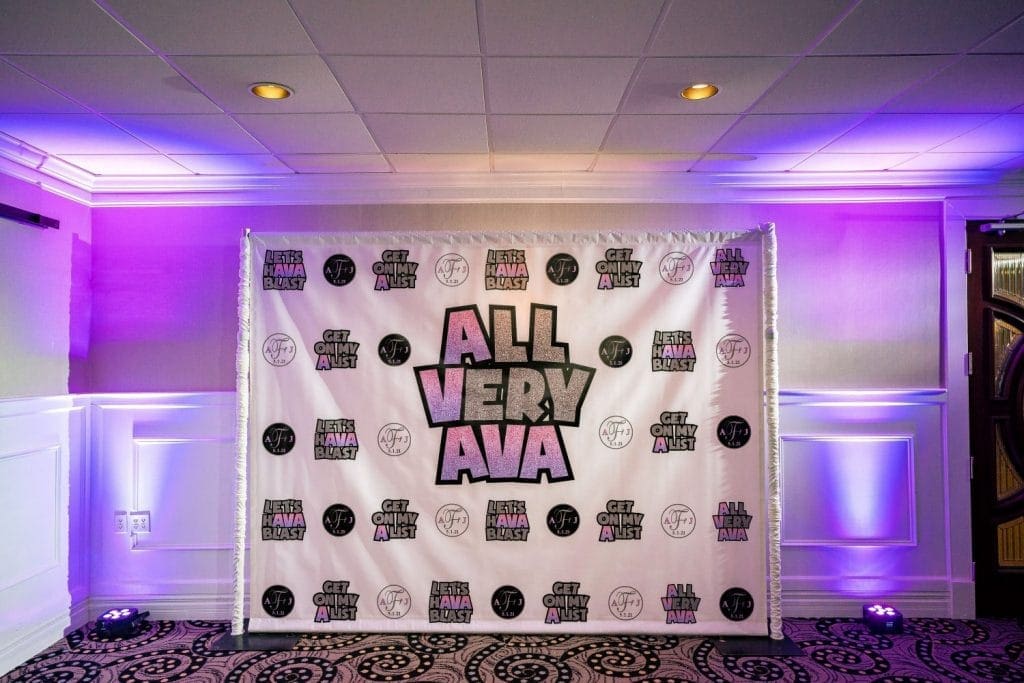 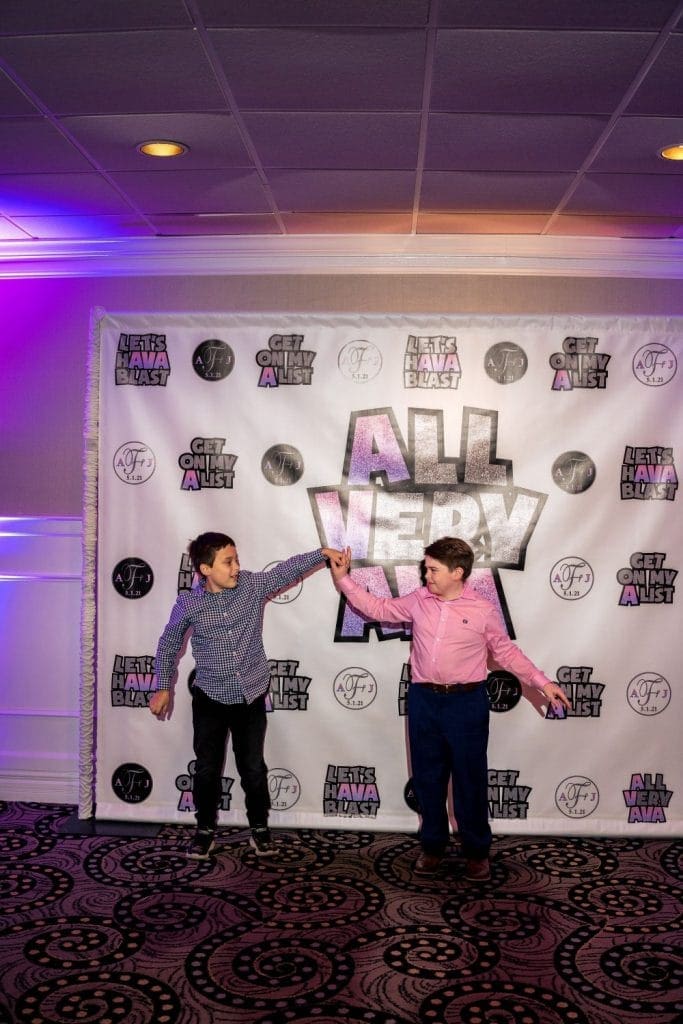 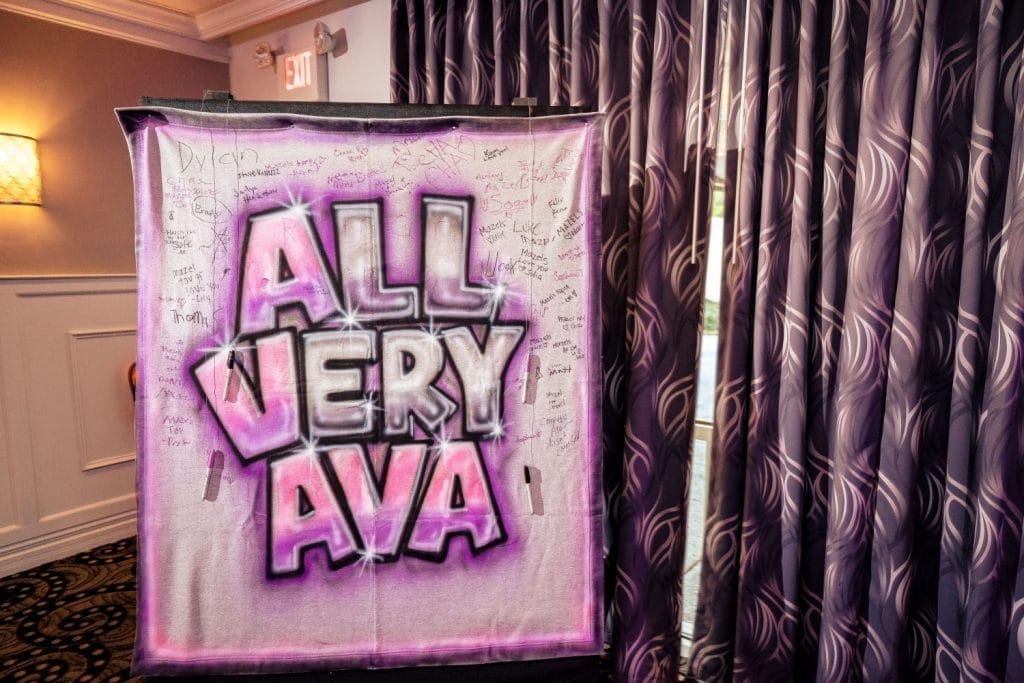 Whether you’re having a bat or bar mitzvah, a birthday party, shower, or need a photographer to commemorate your engagement or wedding, J & J Studios has you covered! We also offer videography services. In addition to this, we are licensed to pilot drones to capture your events from above as well! Contact J & J Studios today to cover all your videography and photography needs for the most important events in your life. We’d love to do for you what we did at Ava’s Ramblewood Country Club bat mitzvah! 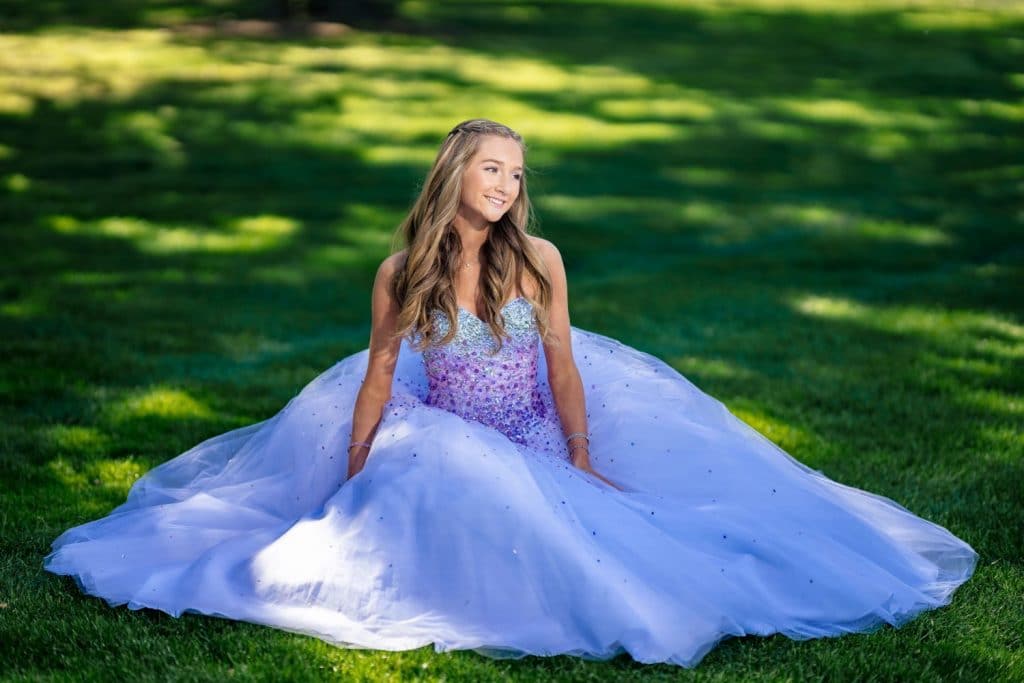