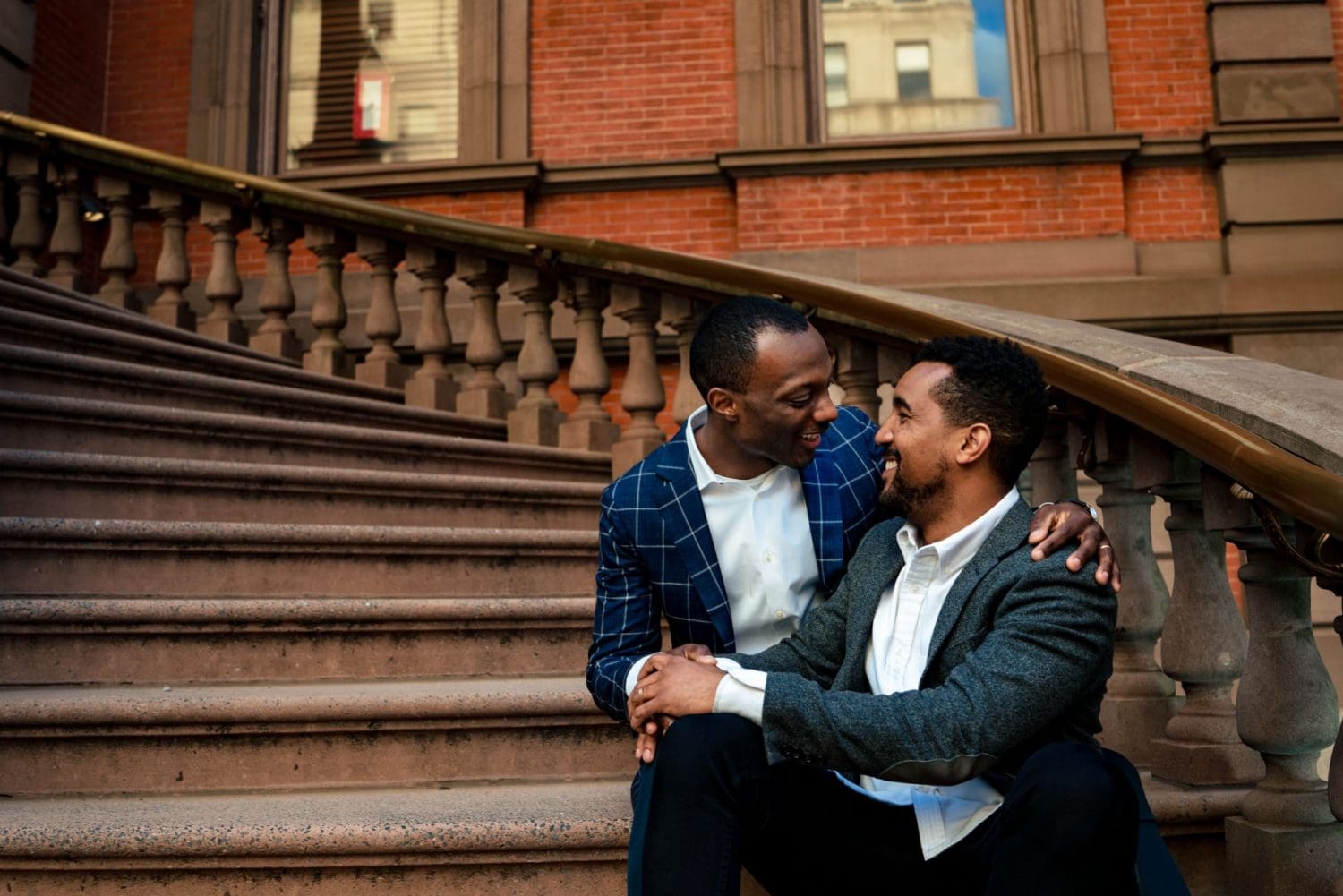 Meet the Couple: Josh and Anthony

Anthony and Josh are a couple who share a modern-day love story. This wonderful couple met online using a dating app. One day, after Anthony had worked for over fourteen hours, he noticed Josh on the app. He recognized Josh’s photos from a different dating app, where Josh hadn’t reciprocated Anthony’s interest. Anthony didn’t want to waste this second chance. So, he used the “super like” feature on Josh’s profile to let him know he was very and truly interested. 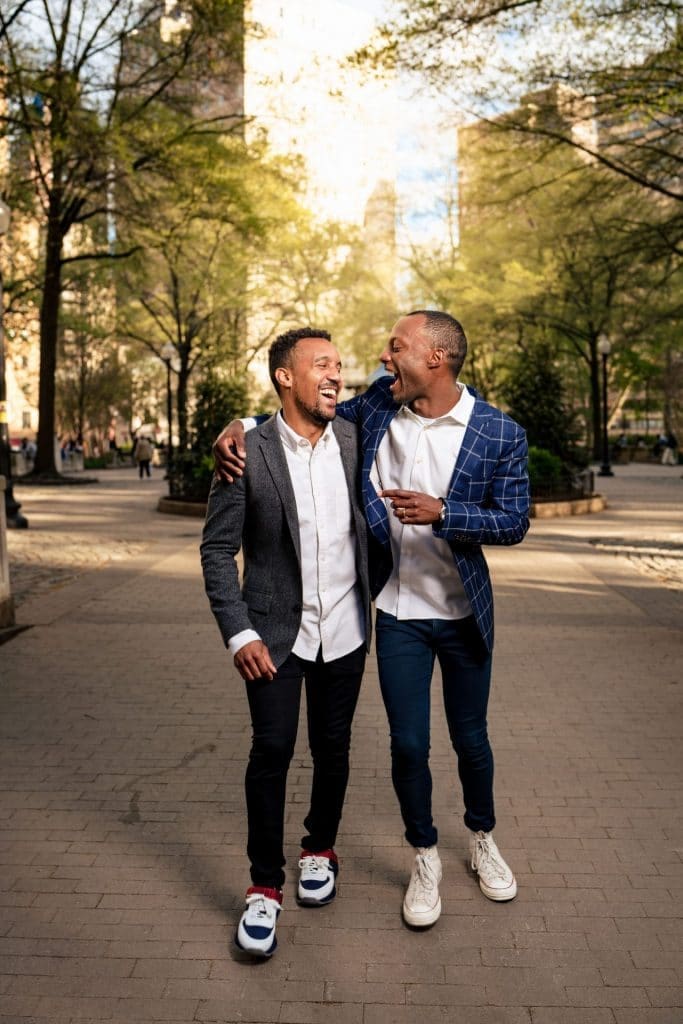 This time, the two matched on the app. They “immediately began having [a] great, easy, flowing conversation.” What a fantastic beginning towhat has become a beautiful relationship. And, look where they are now! 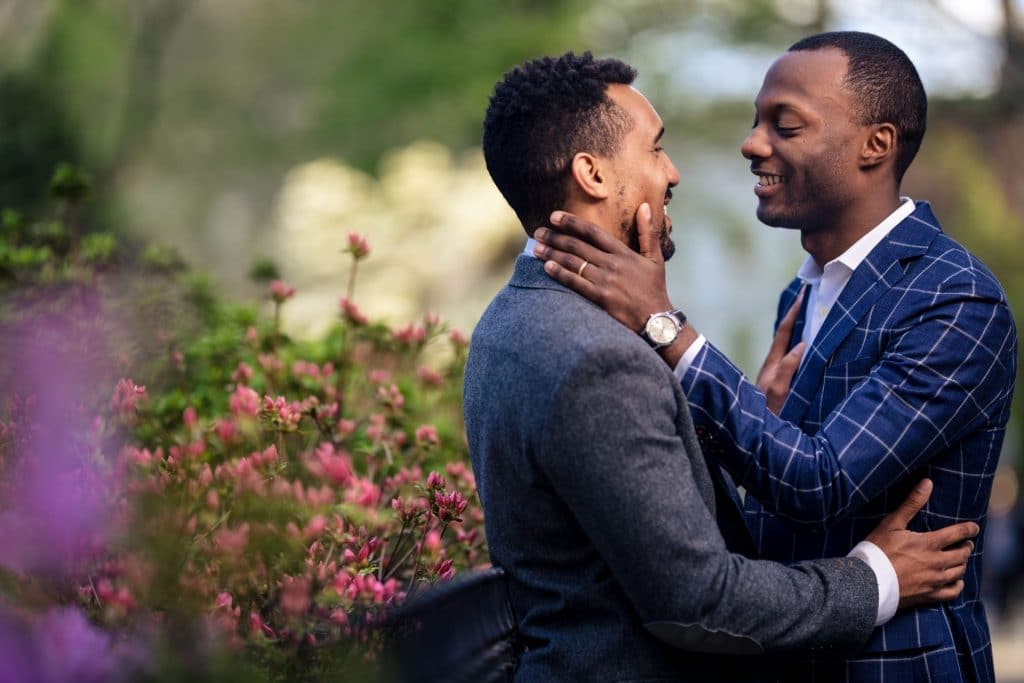 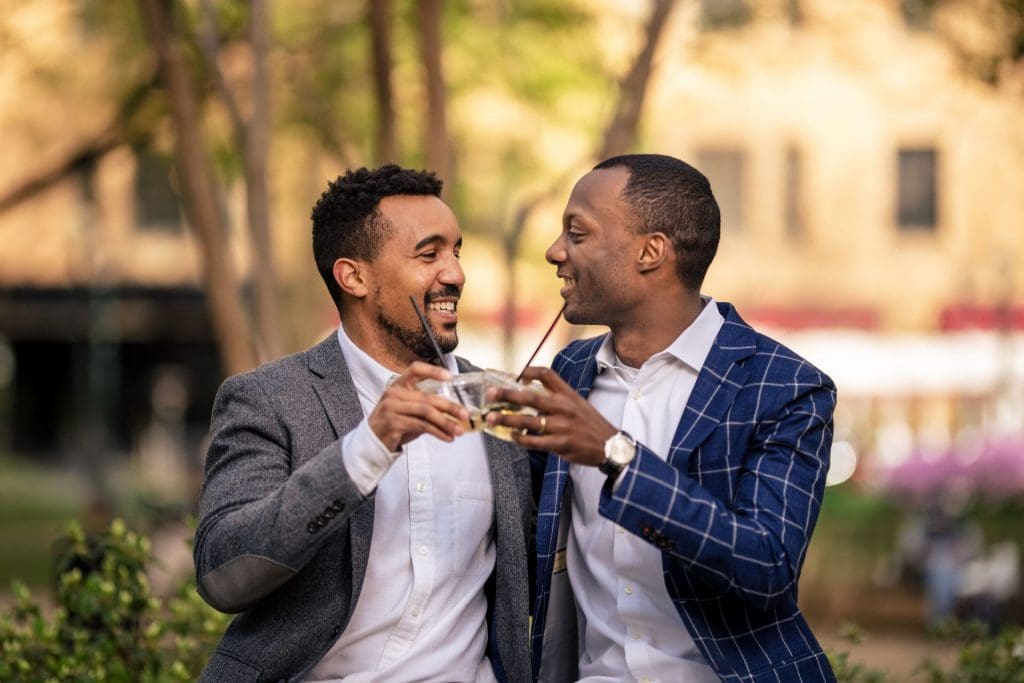 A few Sundays after Anthony and Josh matched on the app, they met in person at a local establishment for drinks. Anthony says of that first meeting, “Meeting in person was even more amazing than our connection online.” Anthony was immediately drawn to Josh.“As anyone that knows Josh can attest,” Josh is handsome, with a warm, welcoming energy and personality emanating from him. “I immediately felt comfortable on our first date,” Anthony told J & J Studios. 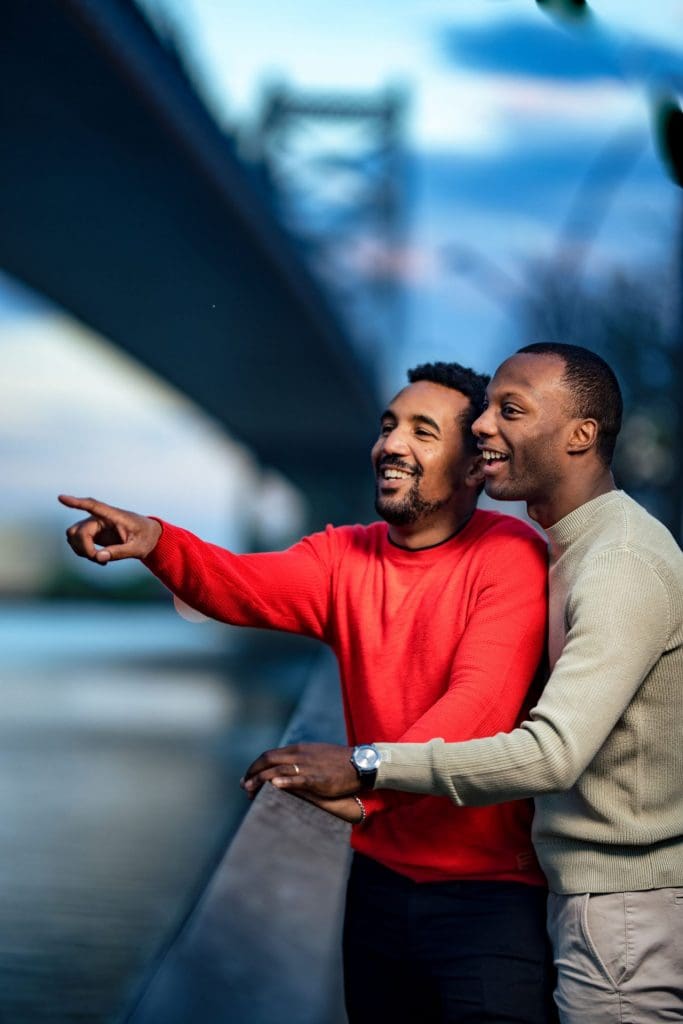 Anthony and Josh shared an instant connection in addition to the initial spark between them. They found they were compatible in so many different areas of their lives and personalities. For example, they’re both fans of the reality TV show The Real Housewives of Atlanta. Additionally, both of them place a great deal of importance on their families, and love and value their families immensely. Josh and Anthony also bonded over the complexities of being a “black gay male in America” that they share. 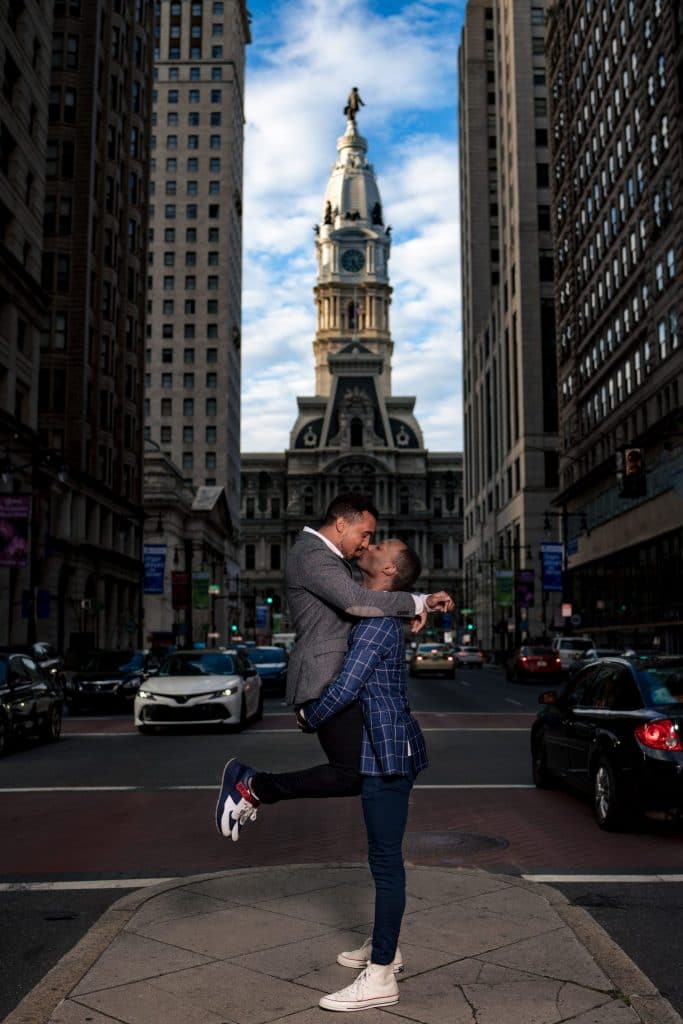 Anthony remembers how he didn’t want to leave their first date that night. Unfortunately, he had to finish doing some work – Anthony works as a CPA, and it was the busiest season at his job. The first thing Anthony did when he returned home was to text his best friend. He wrote, “So, I met a guy . . . and it was great. Fingers crossed. So happy I didn’t cancel.” Josh seems ecstatic that Anthony didn’t cancel the date. J & J Studios is, too!

About Josh and Anthony

When asked what he loves most about Josh, Anthony exclaimed, “Everything!” Then, he asked, “Can I say that?” 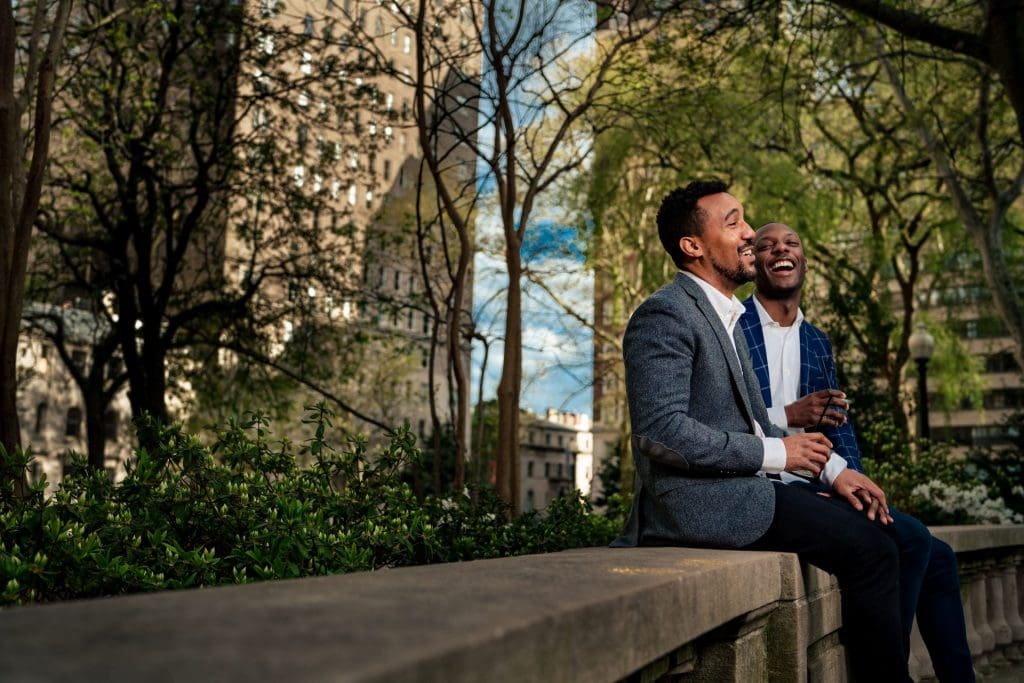 However, Anthony went on. He explained how Josh wins the heart of everyone around him. Josh is also the calm to Anthony’s storm of stress and anxiety. “[Josh] is one of the most passionate people I know. He puts his all into everything he does.” 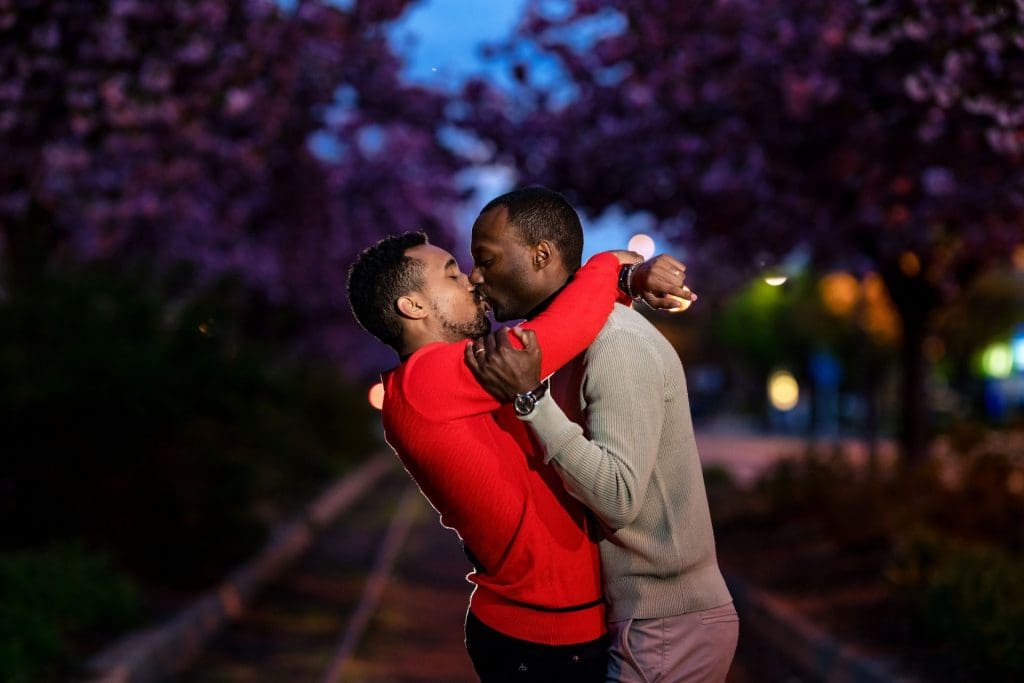 Both Anthony and Josh have supported each other through the sacrifices they’ve had to make as a couple. Josh encourages Anthony to try things and experiences outside of his comfort zone, and the two balance each other wonderfully. “I love the way he loves,” was the last statement Anthony made when describing what he loves most about Josh. 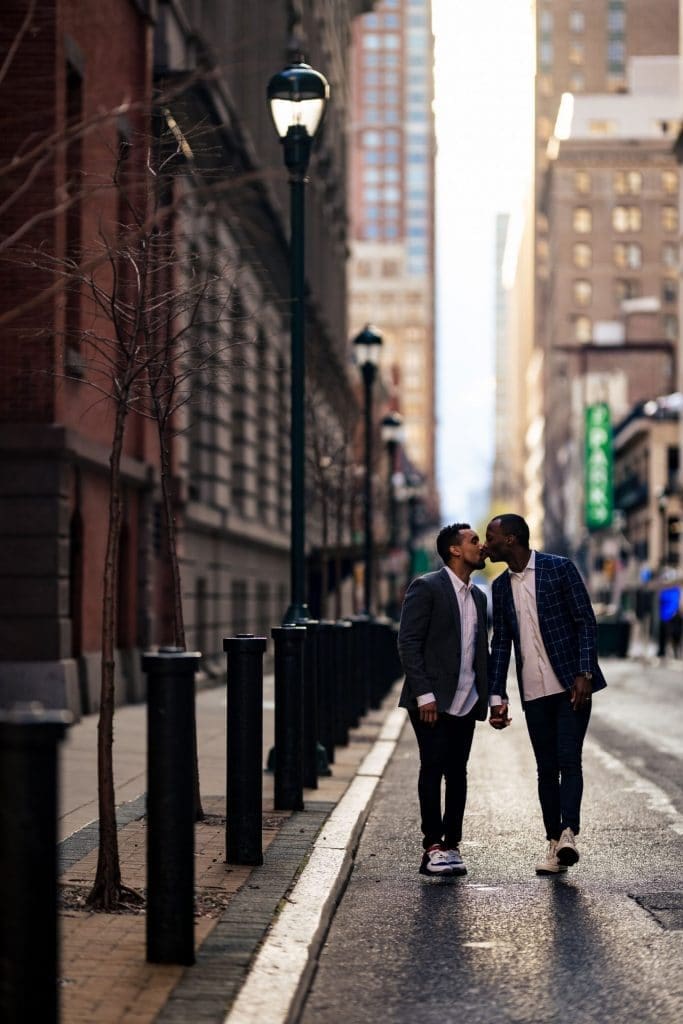 Anthony is local to the Philadelphia area – he’s originally from Conshohoken, Pennsylvania! He works as a senior manager at Ernst and Young. Anthony is also working on his MBA at Cornell University, and plans to take up baking as a new hobby once he’s finished that degree! 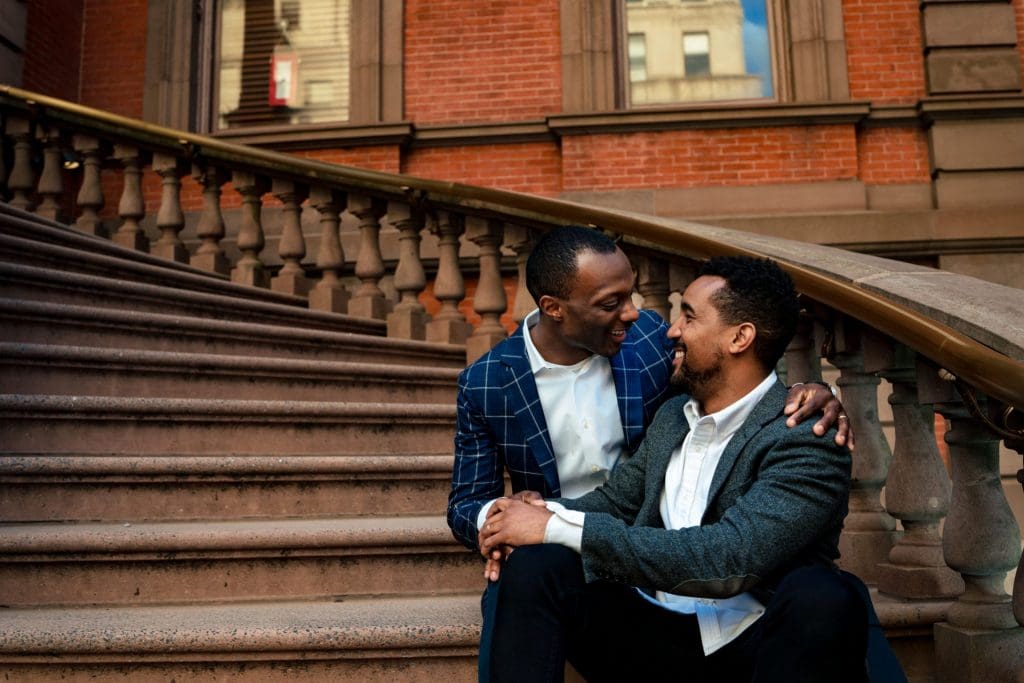 Here is a fun fact about this lovely couple. Josh and Anthony have an adorable miniature goldendoodle named Theodore. “[He] didn’t make the engagement photos, but will definitely be in some wedding photos!” We’re so excited to see this handsome couple on their wedding day! J & J Studios is especially looking forward to the addition of their cute little dog on such a joyful and momentous day!

Anthony and Josh decided together about halfway through 2020 that they wanted to get married. They purchased rings together that July, a few weeks before they settled on their purchase of their new home! 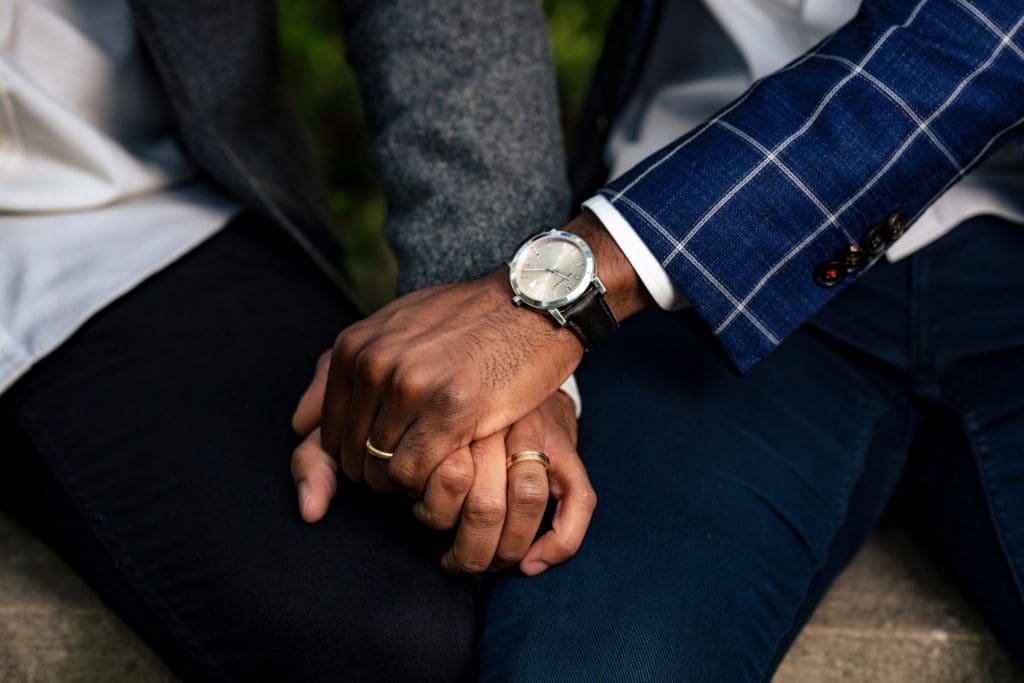 During October of 2020, when Josh’s parents and sister were visiting from Cincinnati. One night during their visit, Anthony’s mother and stepfather, as well as a pair of the couple’s closest friends, came to Josh and Anthony’s home. “You really had to be in the house that day to appreciate how much love and happiness there was in the room,” Anthony told J & J Studios. 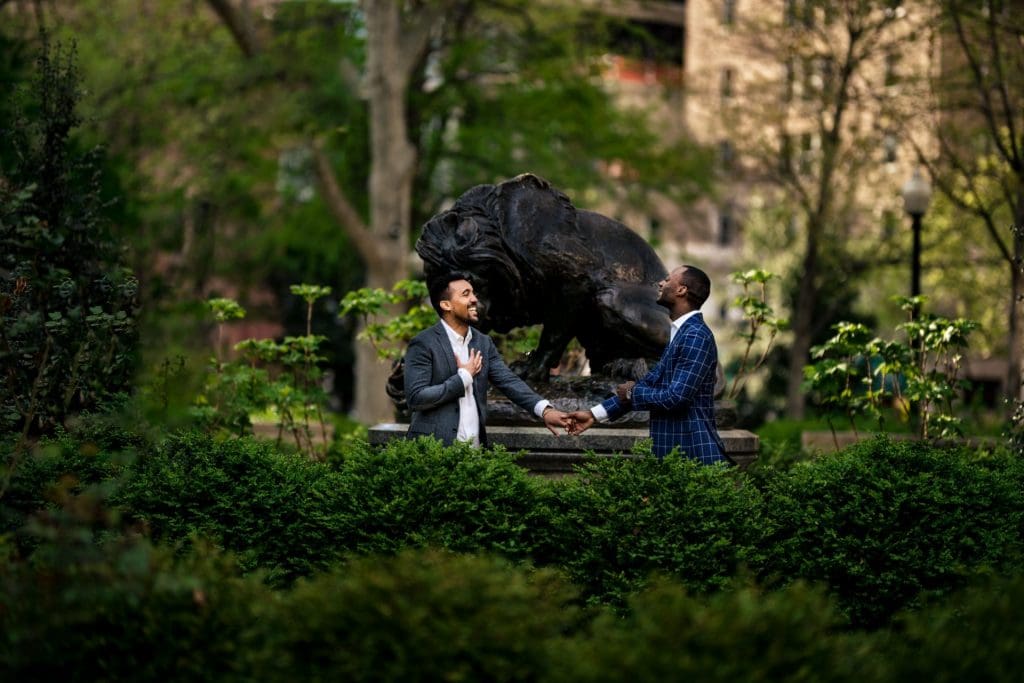 Both Josh and Anthony were immensely grateful for how well their families and friends get along. They are also appreciative of how their family and friends have all blended into one loving group over the past three years that Anthony and Josh have been together. 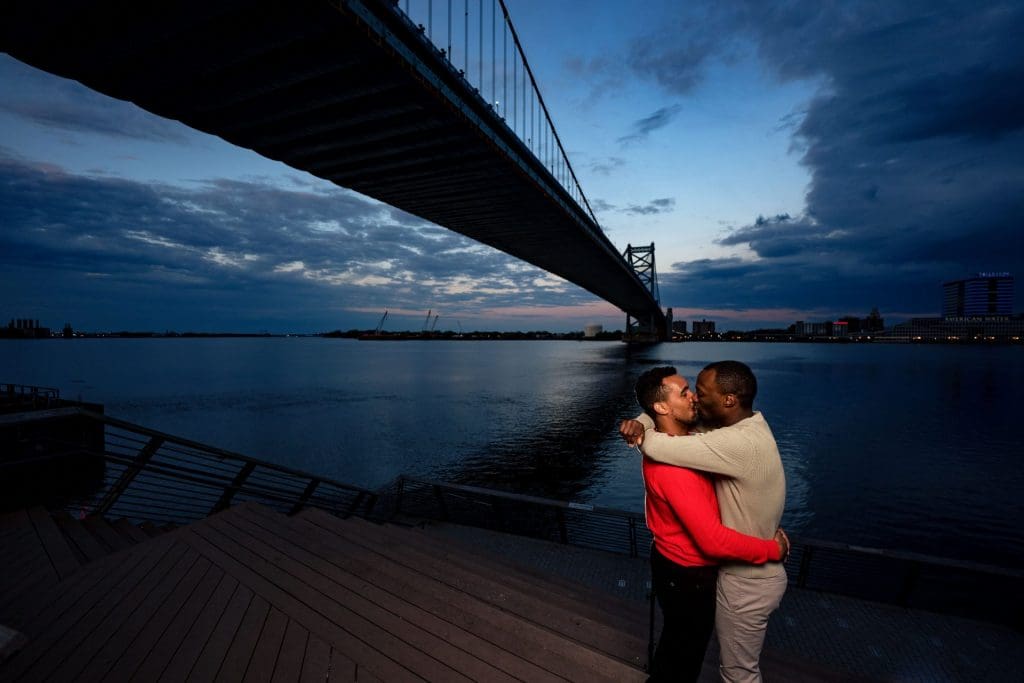 After dinner at Maggiano’s, the group was enjoying a lovely time together, sipping drinks and dancing to music. Then, Josh called Anthony over to assist him with the iPad that controlled the music. Anthony walked over to Josh. He assumed that Josh truly needed help in picking a song. 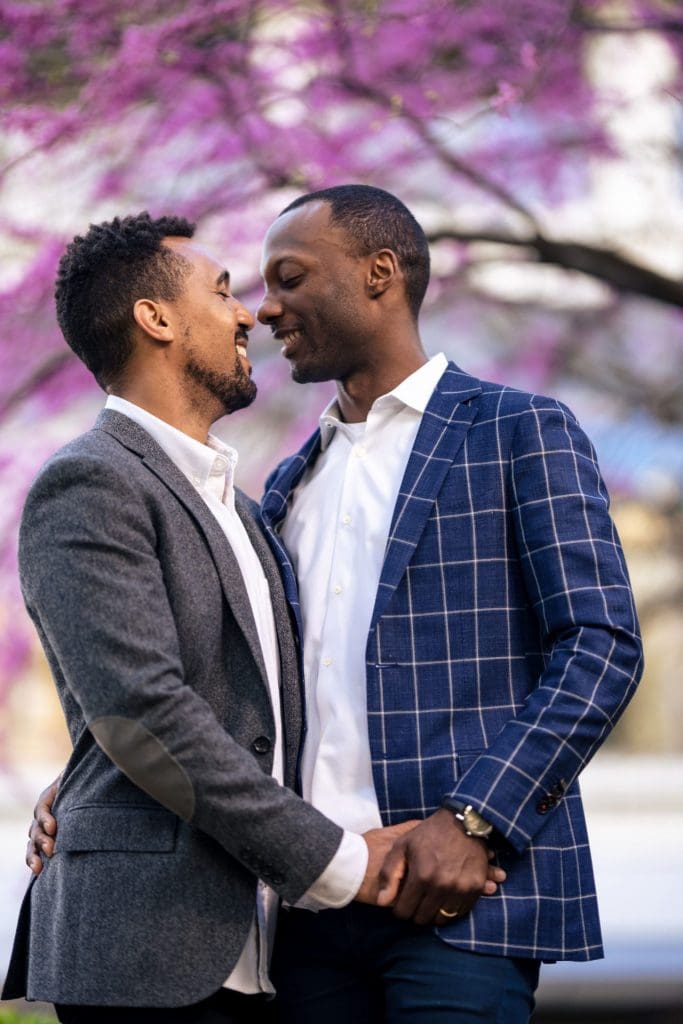 Anthony’s favorite musician, John Legend, was playing over the speakers as he walked over to Josh. When Anthony reached his boyfriend, Josh grabbed Anthony’s hands, got down on one knee, and proposed. Obviously, and happily, Anthony said yes to Josh’s proposal!

Anthony and Josh drew from one major source of inspiration for their gorgeous engagement photos. They chose the location of their favorite things about the city of Philadelphia. That’s Rittenhouse – both the neighborhood and its Square! 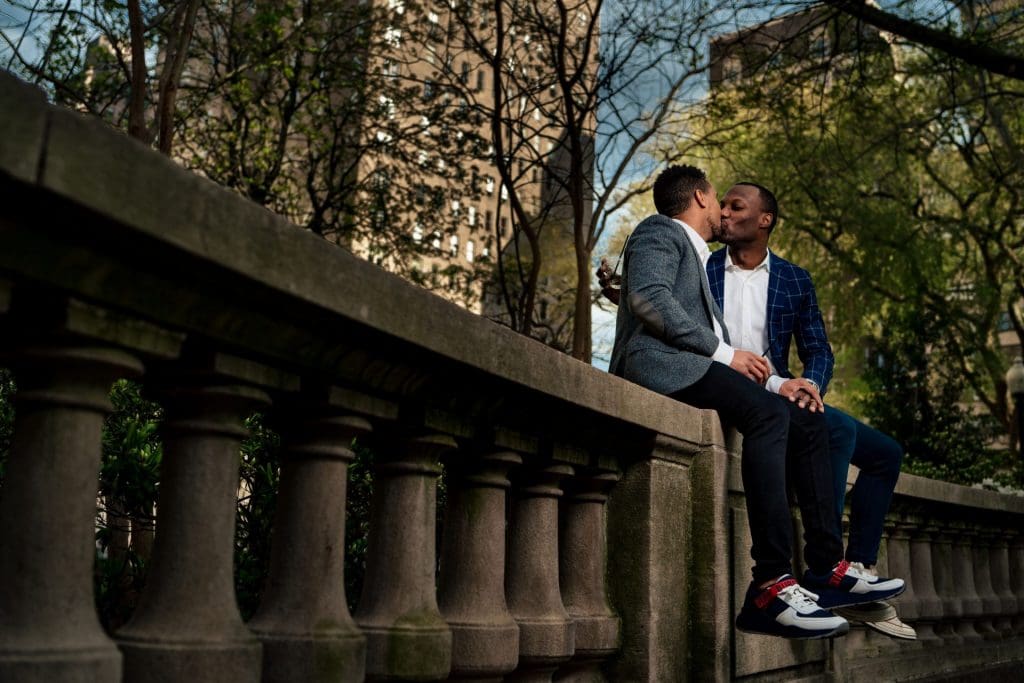 Josh and Anthony love so many things about Philadelphia’s Rittenhouse neighborhood. That’s why they chose it as the setting for their Rittenhouse engagement photography session! They enjoy a number of activities there. For example, they love to brunch at the famous Parisian-style bistro and Philadelphia staple, Parc. Anthony and Josh also relish coffee from LaColombe, or simply enjoying people-watching on a bench. “We really wanted to take photos in a place that we both liked and enjoyed being,” Josh and Anthony told J & J Studios. 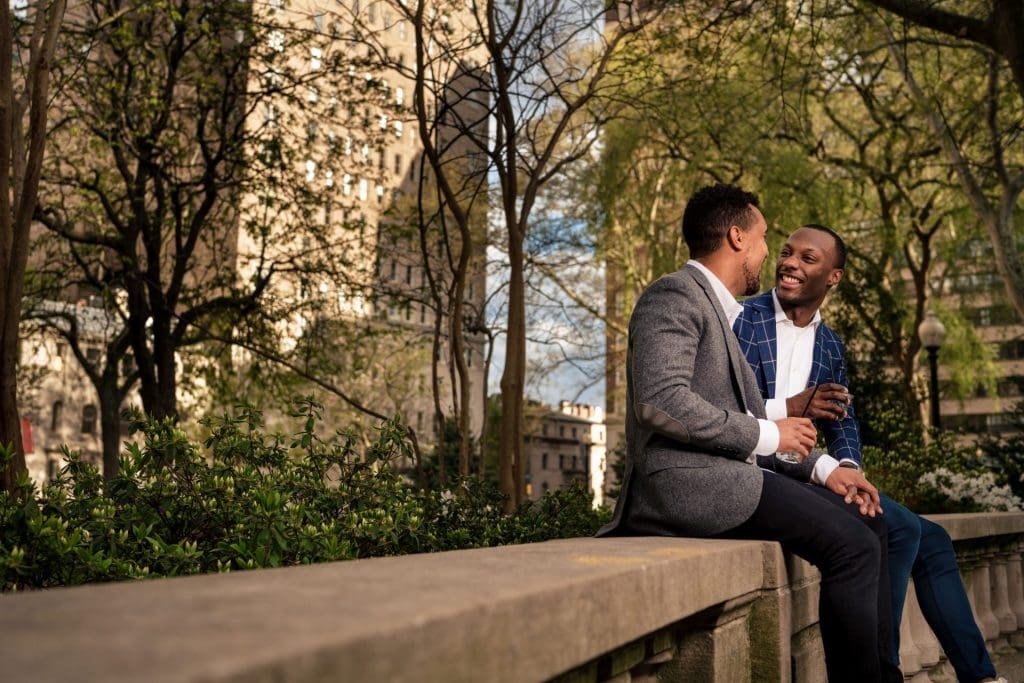 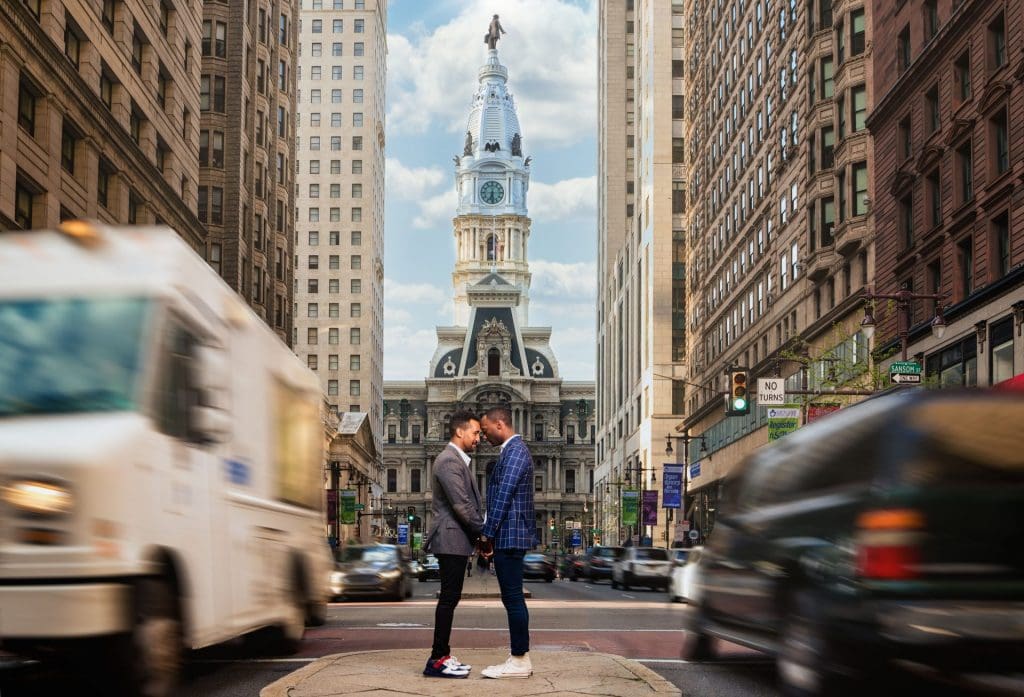 Look at this couple of goofy guys! We loved noticing how much fun they had during their engagement photography session with J & J Studios. It’s obvious that Anthony and Josh have tons of fun together. We were delighted by that fact! 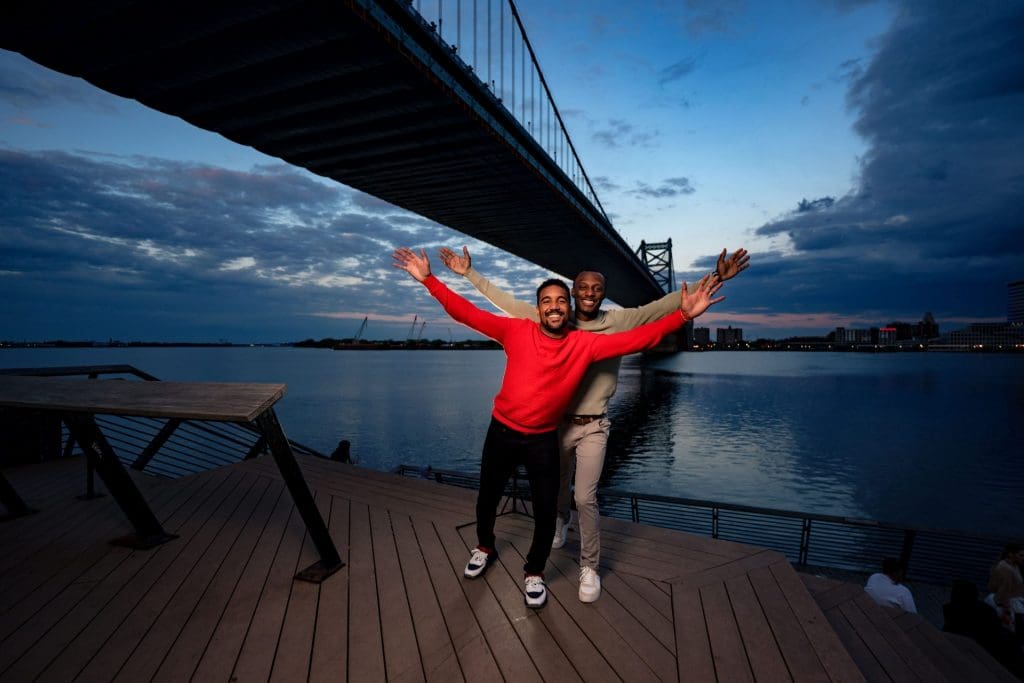 J & J Studios also truly enjoyed seeing the love that Josh and Anthony hold for each other. It was clearly evident in their eyes as they looked at one another. It was clear from the way they physically interacted. 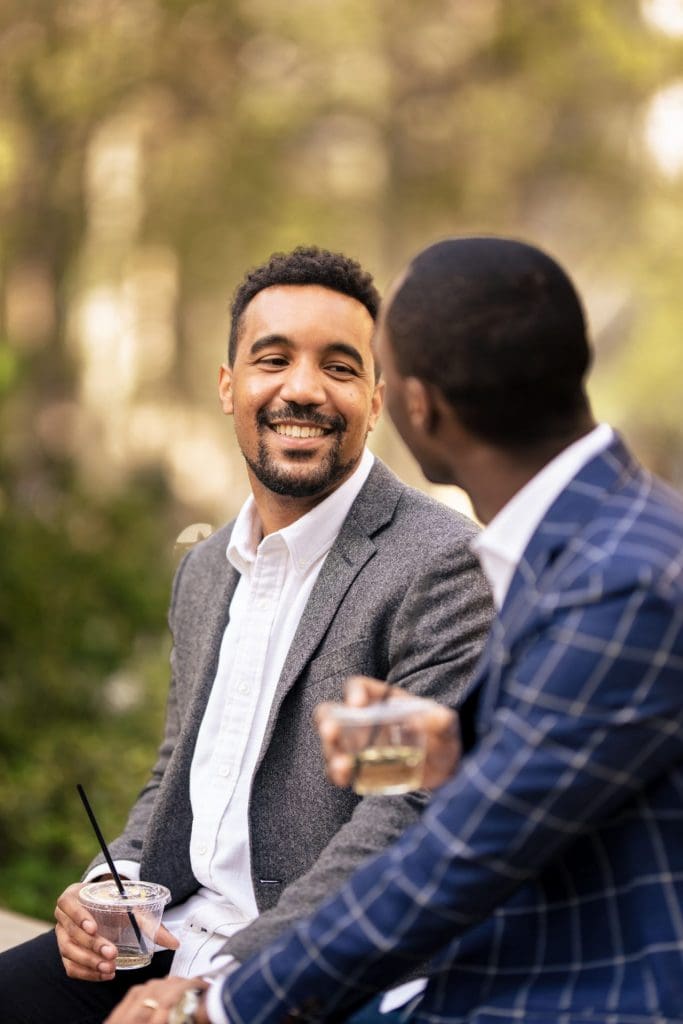 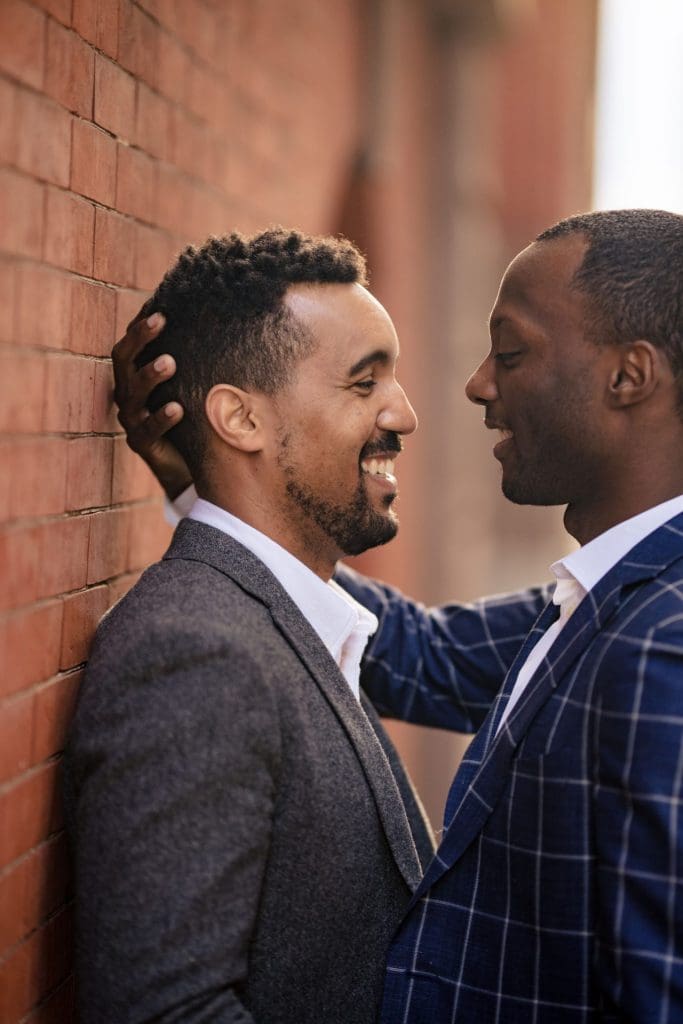 The following photos of this lovely couple reminded us of silhouette portraits. Silhouette portraits were popular through centuries past, but they’re best remembered for their popularity during the Victorian era. And what handsome profiles Anthony and Josh each have! 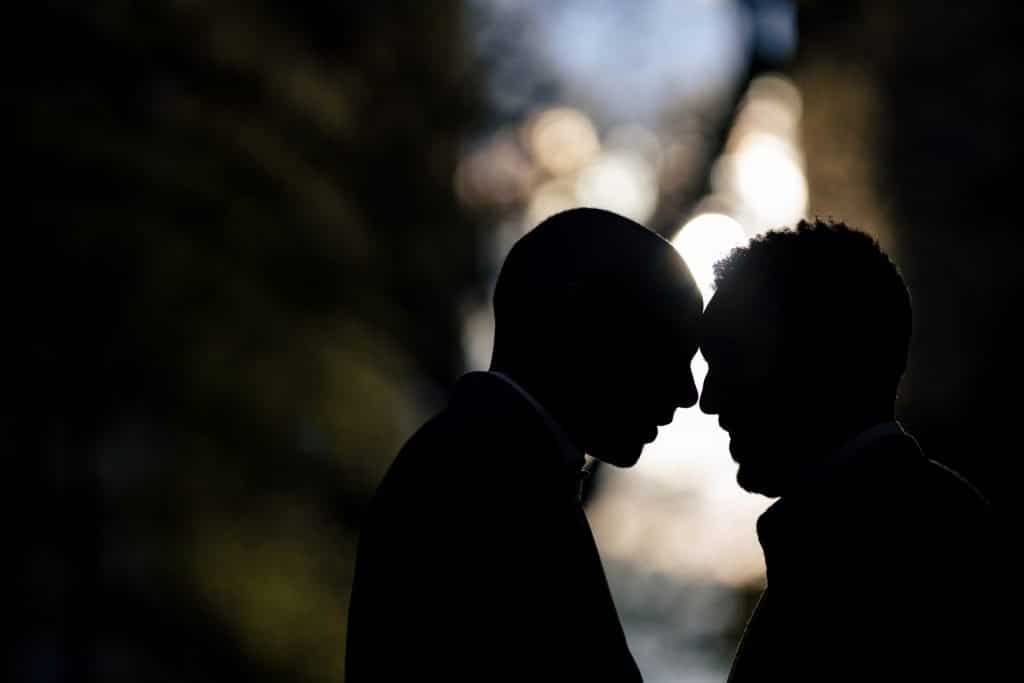 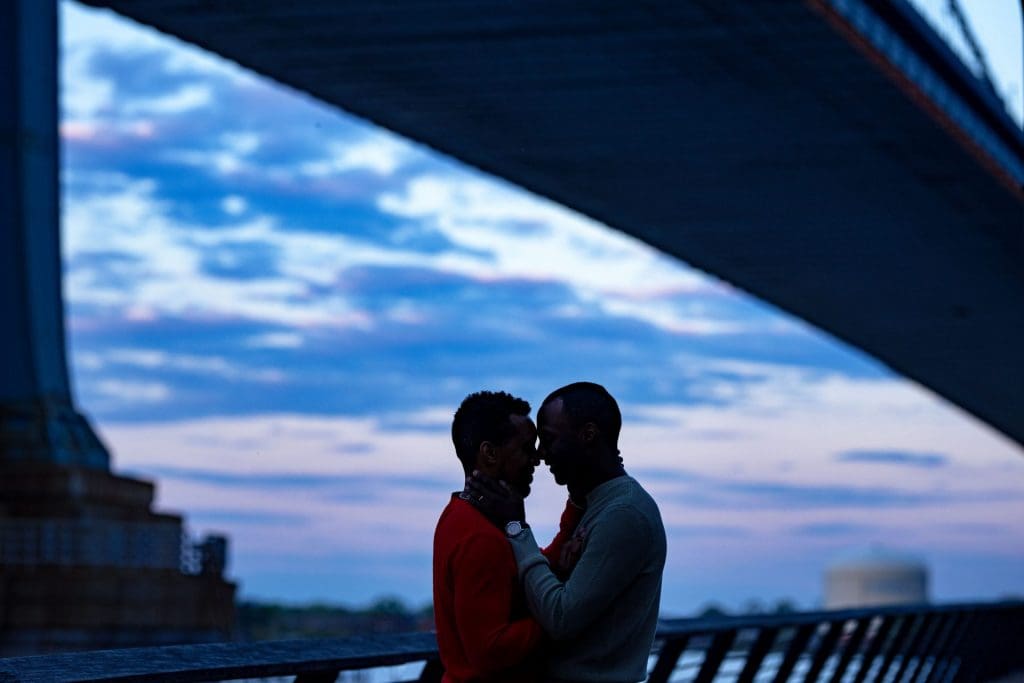 According to their own report, Anthony and Josh have had a good experience with wedding planning so far. Anthony is “the super type A one in the relationship.” So, Anthony is the one who has all the spreadsheets for all the wedding planning and logistics.” Josh and Anthony have already selected and reserved their venue. They chose the Fitler Club on the Schylkill River. They’re so excited about this gorgeous new venue! 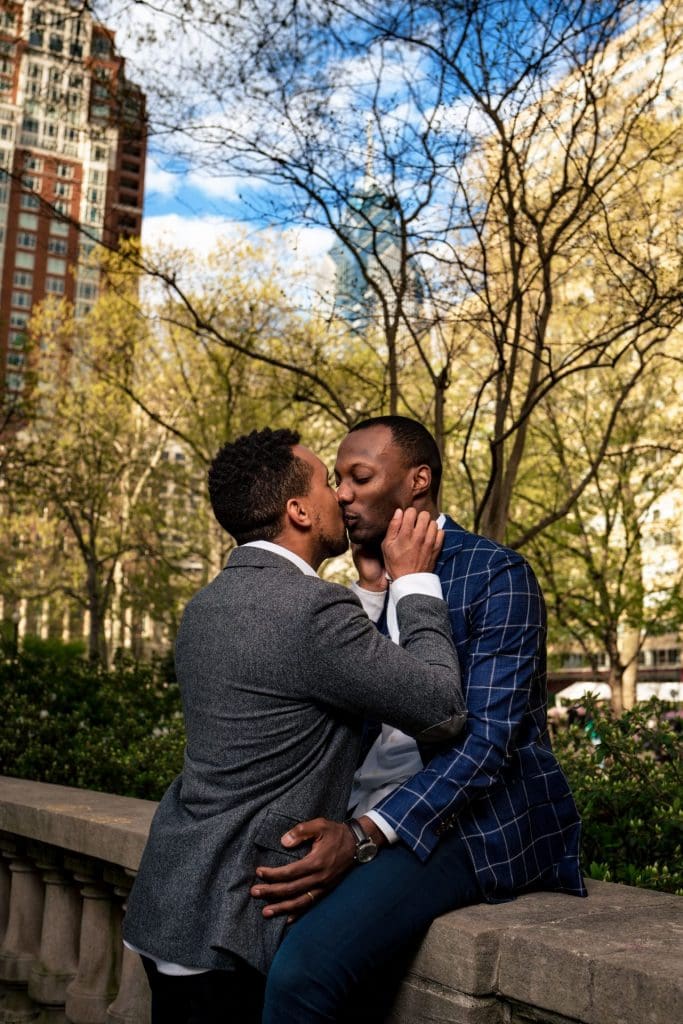 Josh is an incredibly creative person. So, he is anxiously awaiting the moment that he can begin the design and decor process for his and Anthony’s wedding. 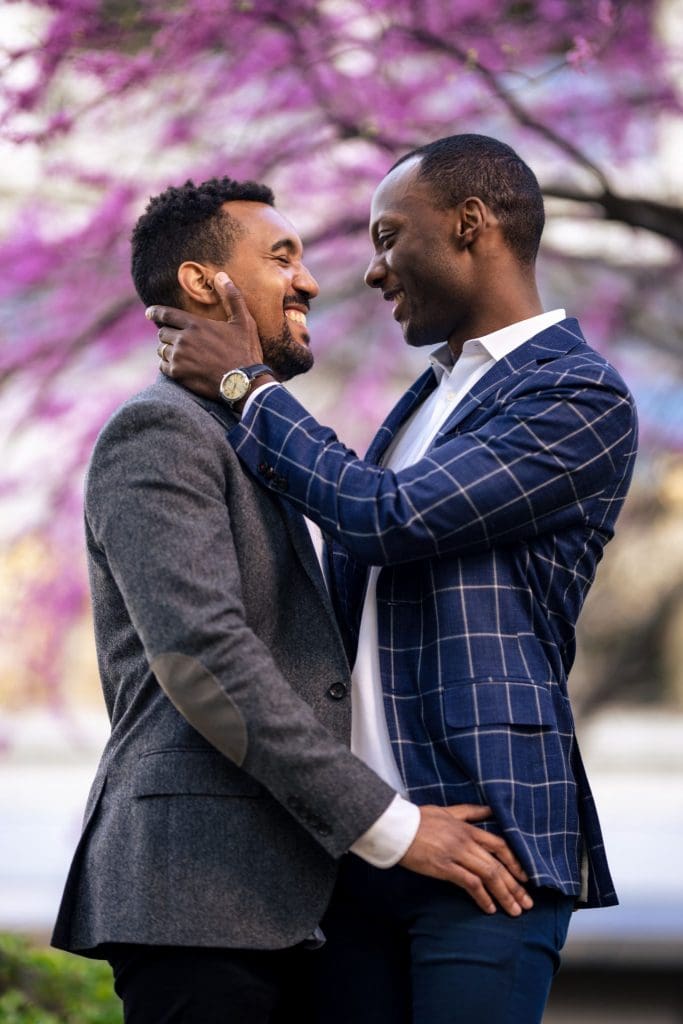 Josh and Anthony confessed to us what the most difficult part of planning so far has been. Apparently, the process of deciding who to include on their guest list has been the hardest part of the planning process so far!

“We cannot say enough good things about John!” Anthony and Josh gushed when we asked them about working with J & J Studios’ John Ryan. During our initial video consultation, a thirty-minute meeting stretched into an entire hour because “the connection and energy was so good.” 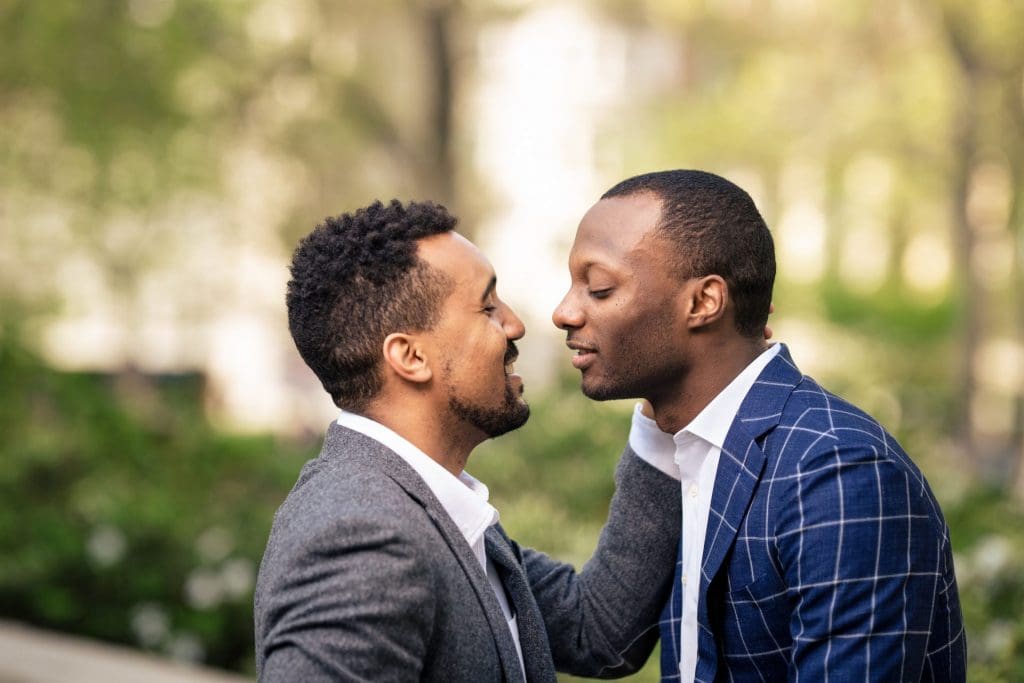 Josh and Anthony describe John Ryan and J & J Studios’ team as having the “perfect combination” of professionalism and fun. “We can’t recommend them more!” Thanks, guys – we appreciate the compliment, and we appreciate both of you! 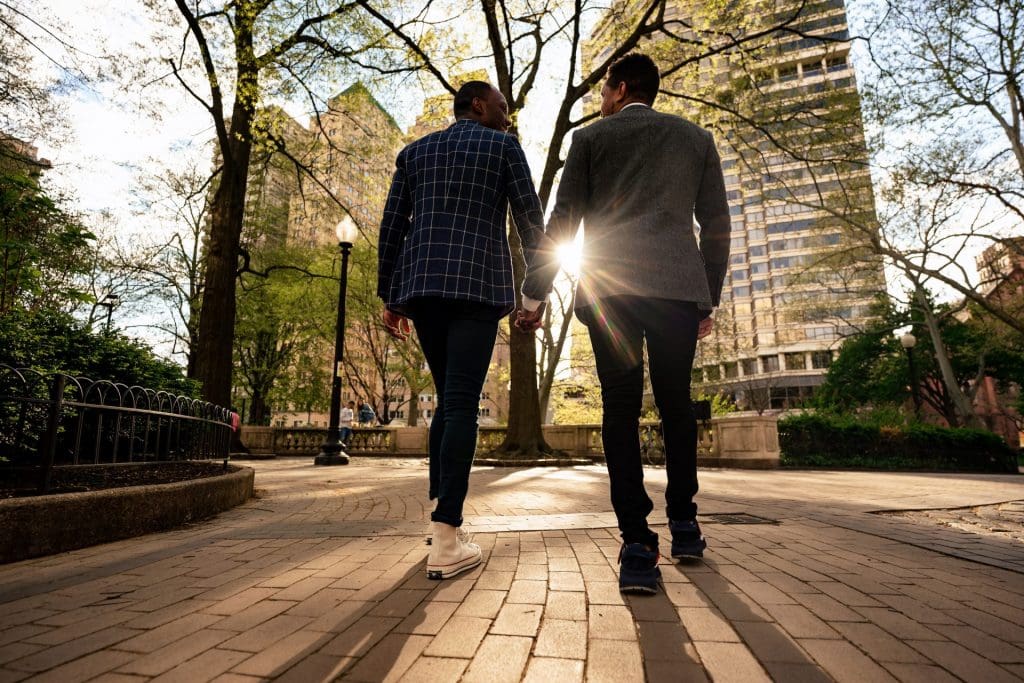 If you enjoyed this love-filled Rittenhouse engagement photography session and are anxious to schedule your own, contact J & J Studios today. We love your love! We’d be thrilled to capture this magical time of life on camera so that you can remember and treasure them forever.