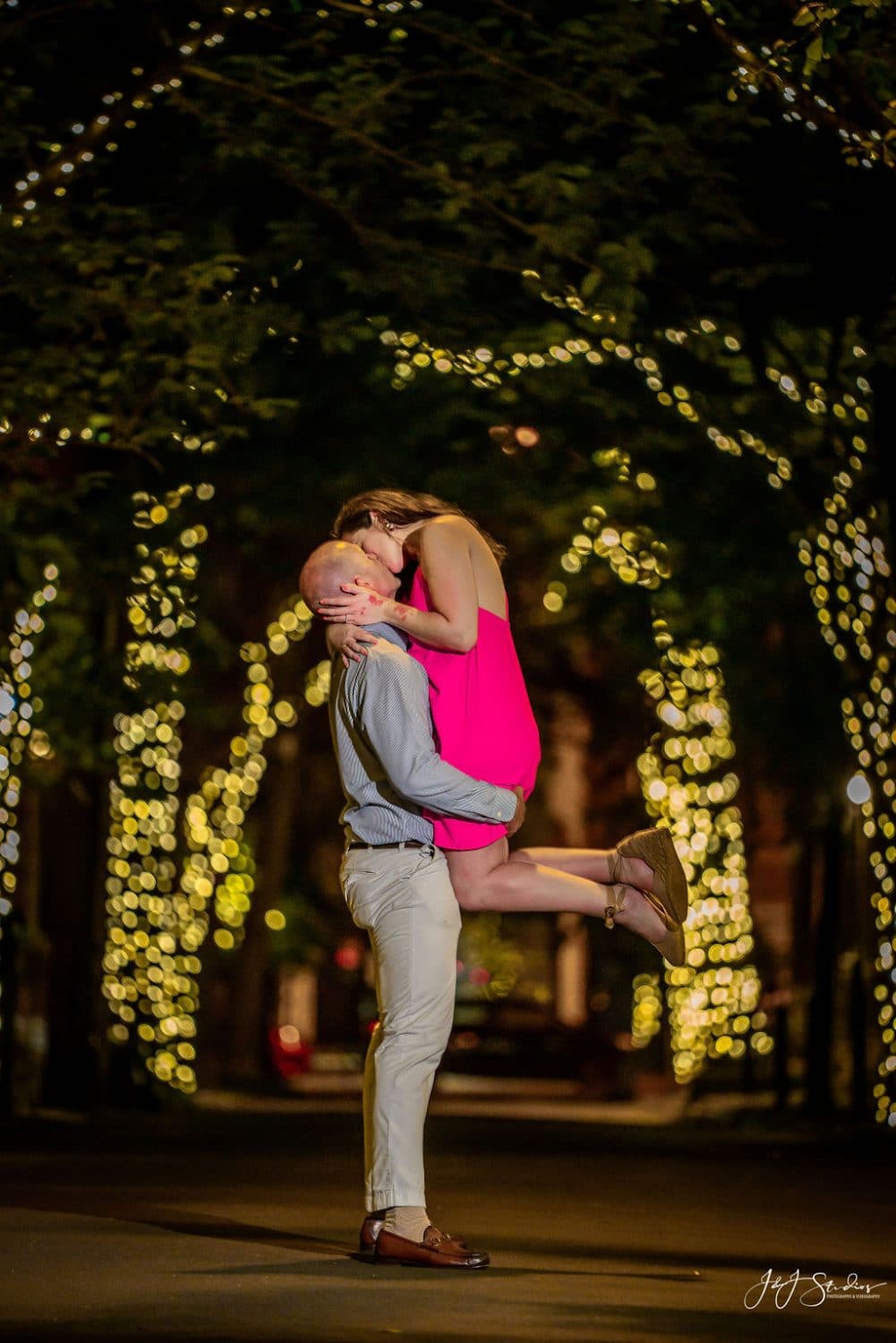 Will’s Rittenhouse Square surprise proposal to his longtime girlfriend Francie took place on a breezy summer evening. J&J Studios was in the scene to document every moment of this waterworks occasion. Will came into our studio a few weeks ago with his elaborate proposal plan. He wanted us to document this special occasion so he and his significant other would be able to relive the moment over and over again. 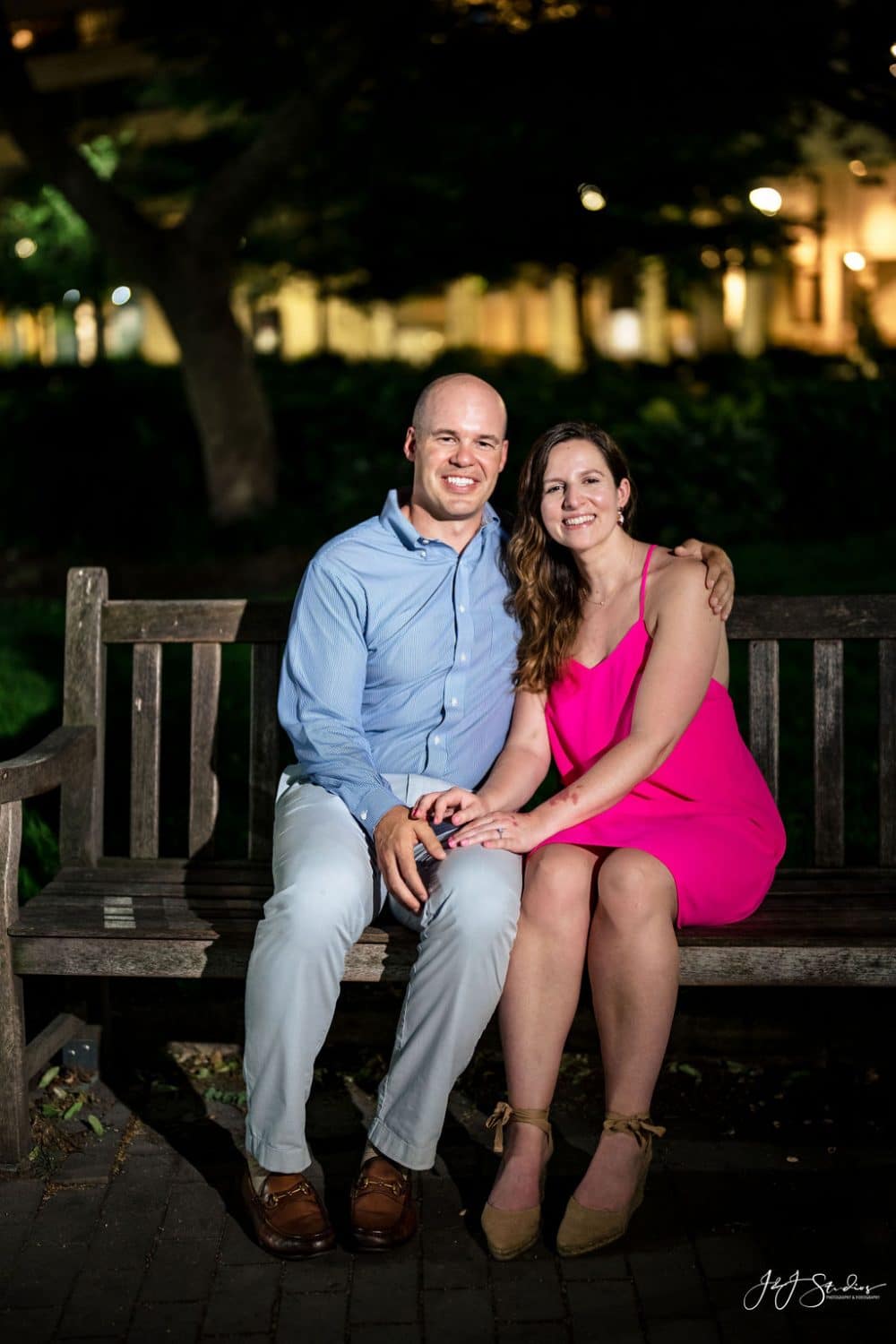 How Will and Francie Met

Will and Francie met at a Giants grocery store in Philadelphia. “For some reason, we kept running into each other while shopping. At one point I had even gotten something down for her from the top shelf. I thought she was beautiful. After a while I’m like this is fate, I have to ask her for her number. She said yes and the rest is history.

”Will fell in love with Francie’s genuine sweet nature” Francie is the nicest and sweetest person I know. She’s always there for everybody,” Will remarked during the consultation interview.

Rittenhouse Square is a beautiful public park in Center City Philadelphia. While the park is stunning all year round, on this summer night the blooming flowers were so vibrant, they accentuated the park’s natural beauty. They provided the perfect backdrop for this surprise proposal photoshoot.

As one of the most peaceful parks in the city, it was the perfect place for Will’s nighttime proposal. Will had made reservations for dinner at their favorite restaurant in Center City. After dinner, they took a stroll through Rittenhouse Square where we patiently waited for their arrival at the designated area. Intricate lighting fixtures adorned the trees which illuminated the entire park. We helped Will select the perfect location for his surprise proposal. 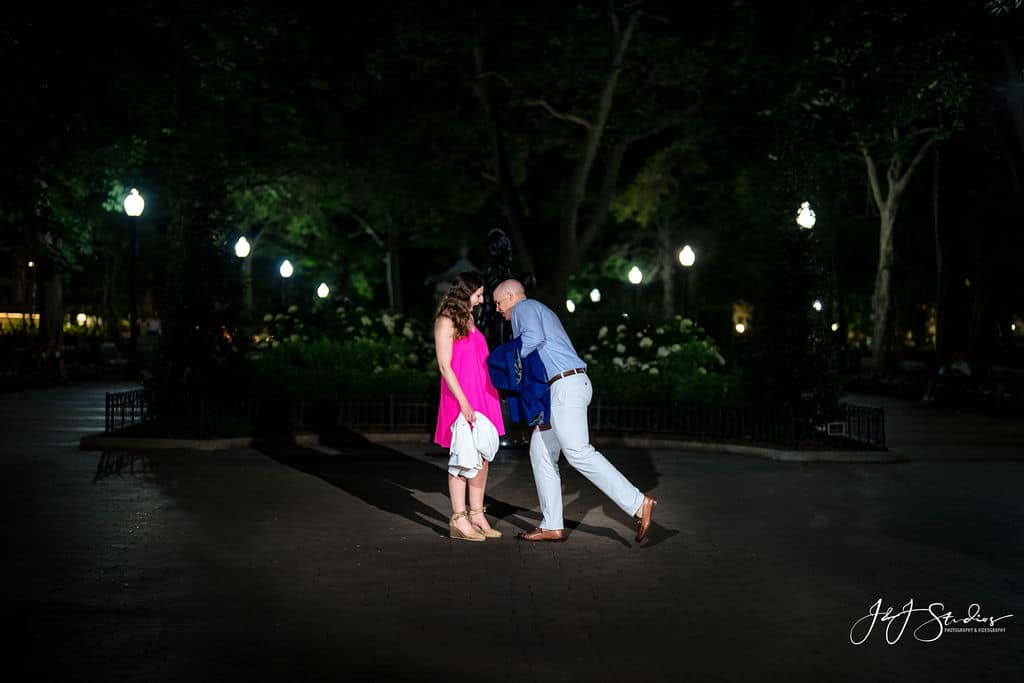 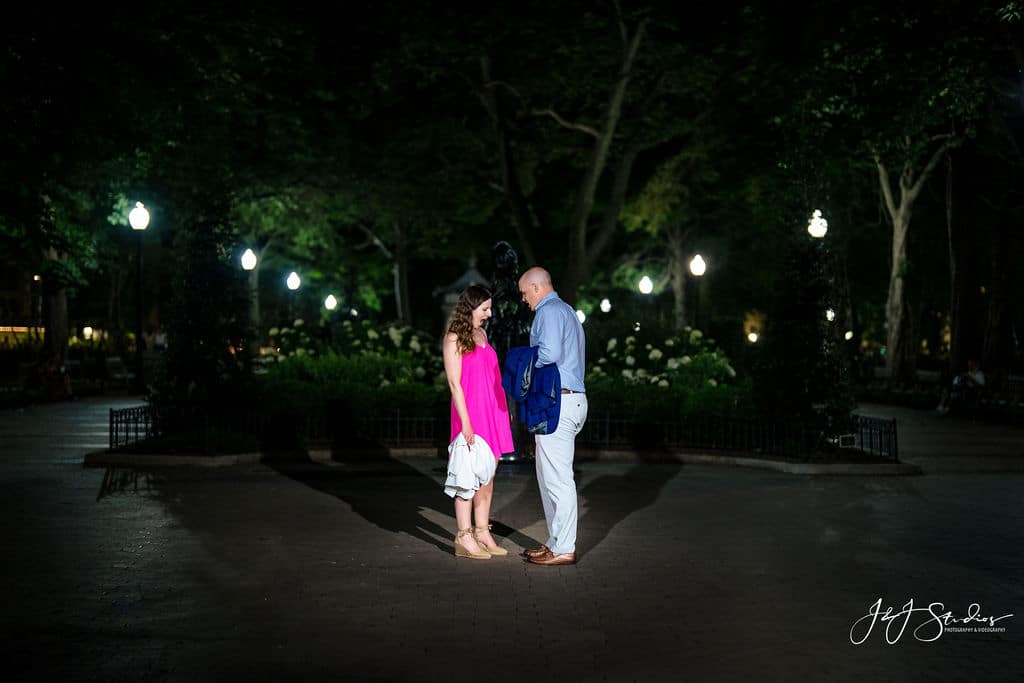 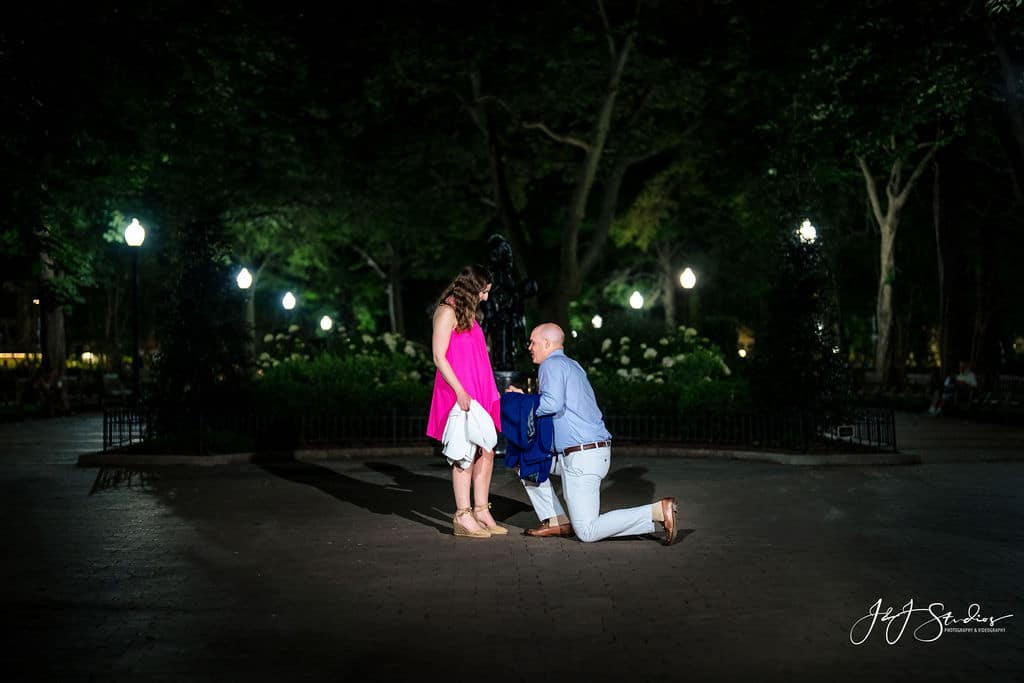 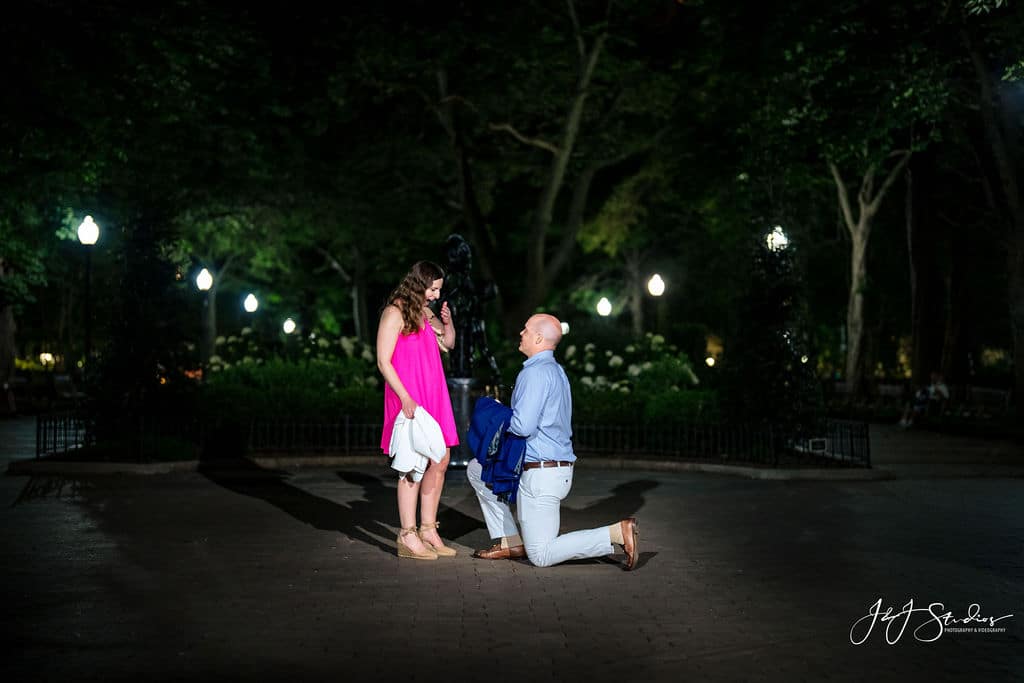 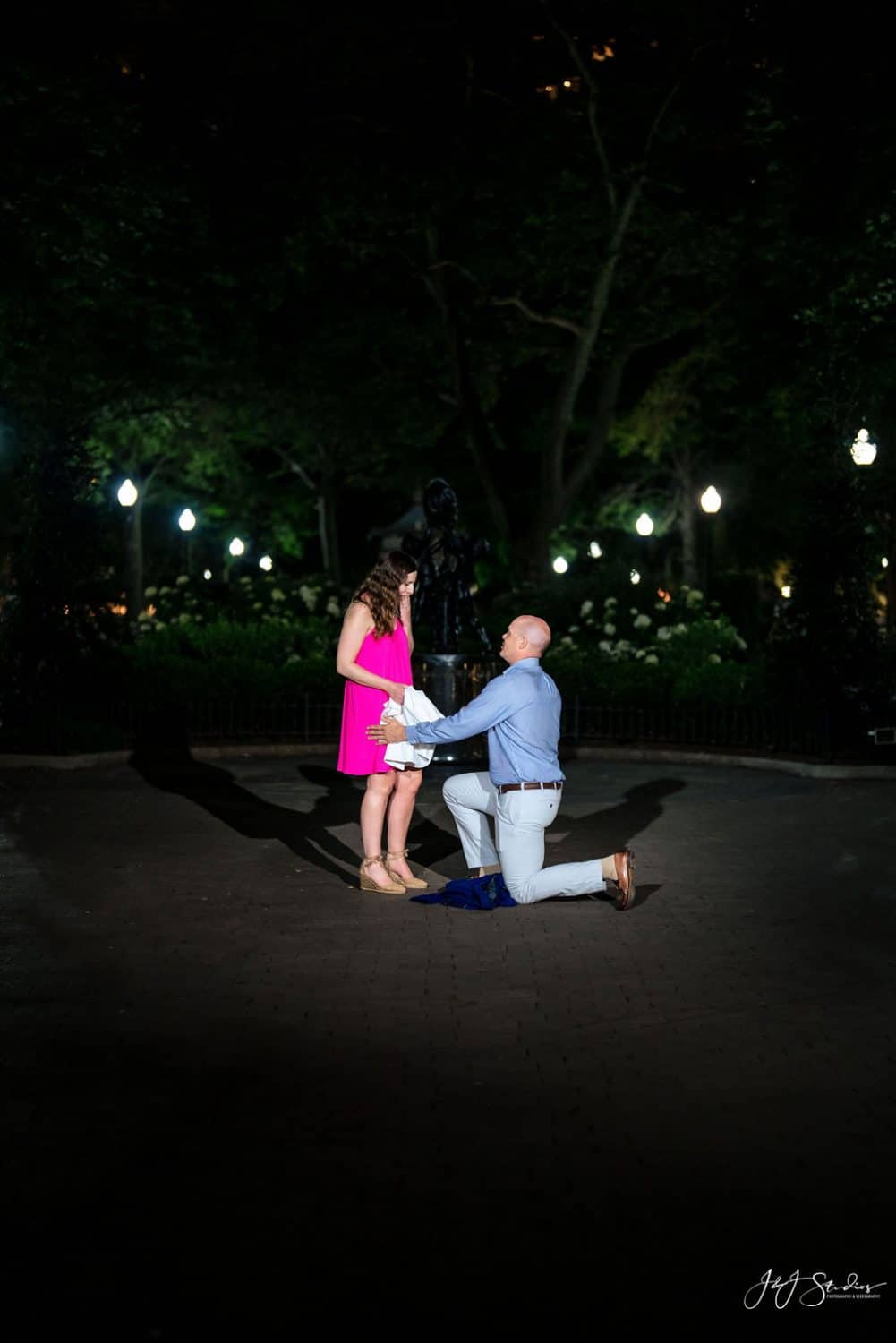 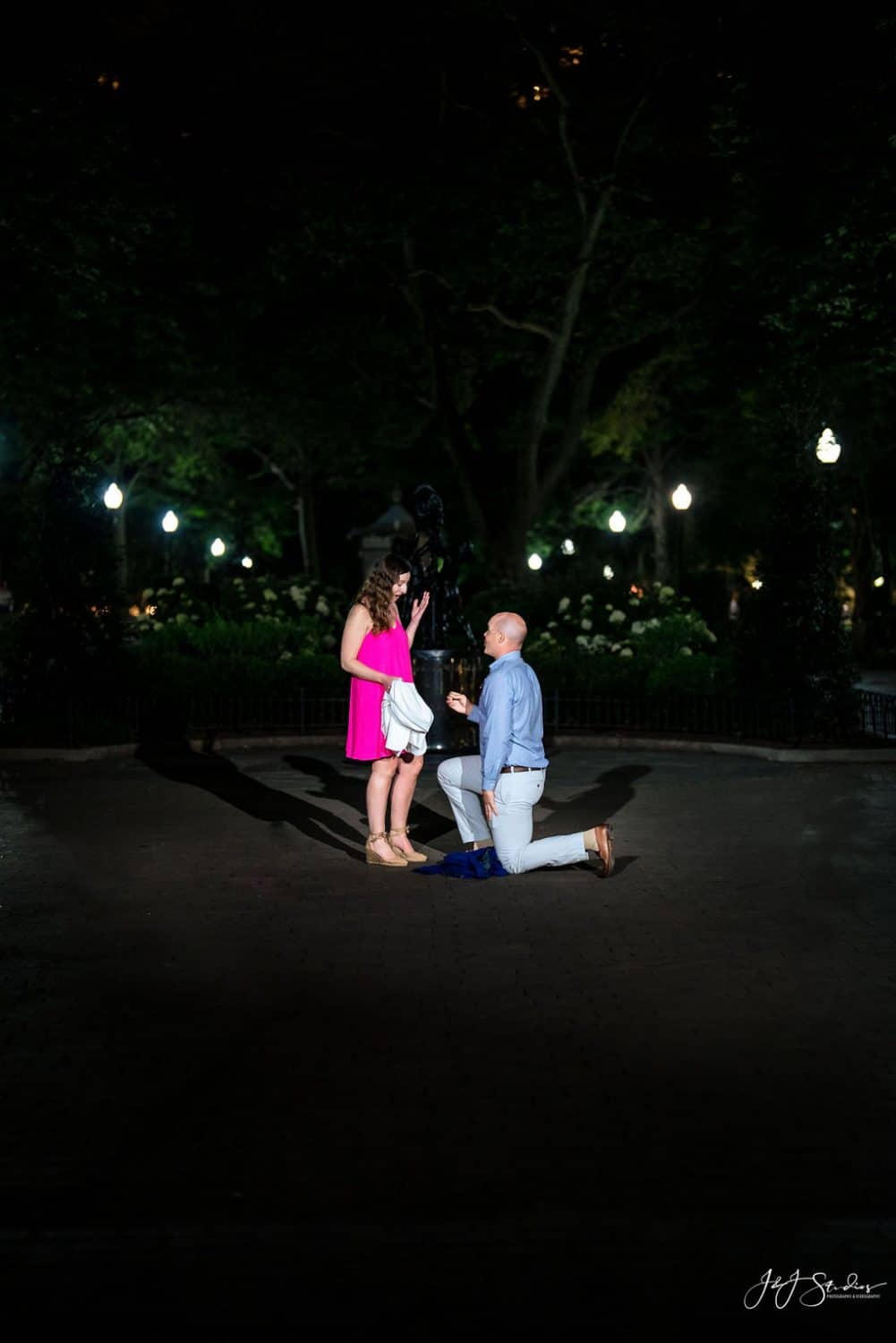 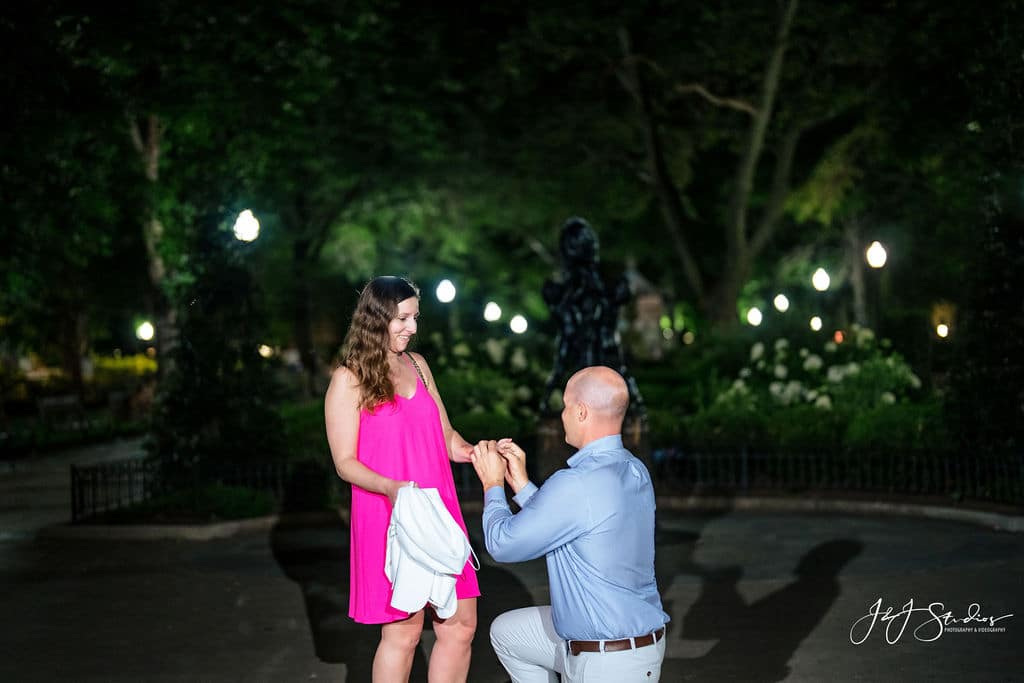 Francie had no idea what Will had in store. As he led her to the designated spot, excitement was surely in the air. She immediately noticed the camera and was slightly confused yet surprised. When Will got down on one knee she knew that this was finally her special moment. Francie burst into tears and immediately said yes. 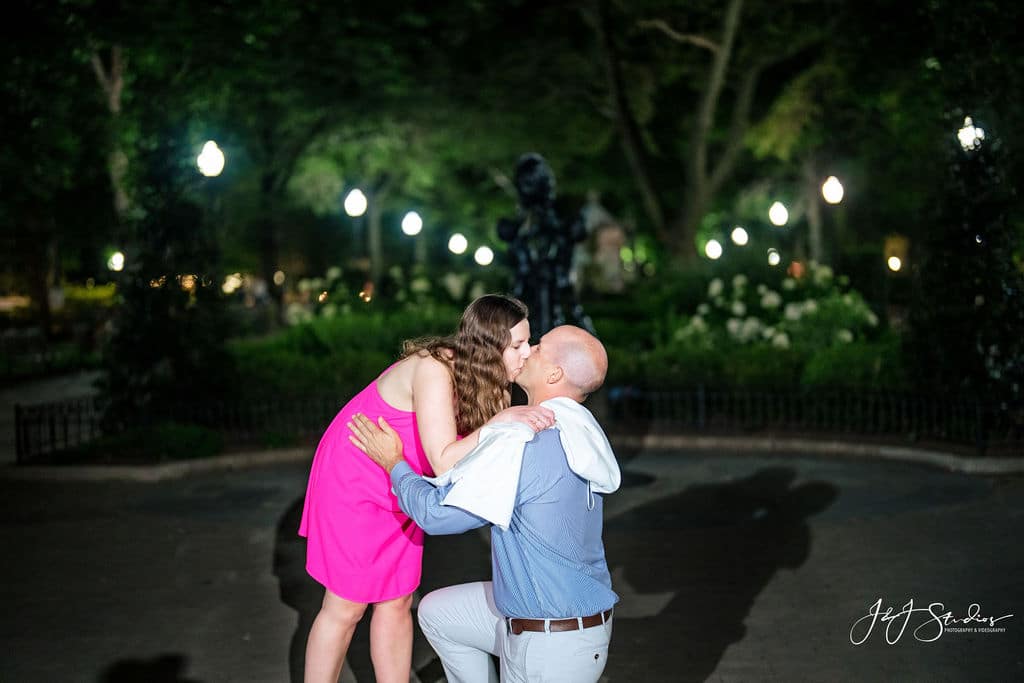 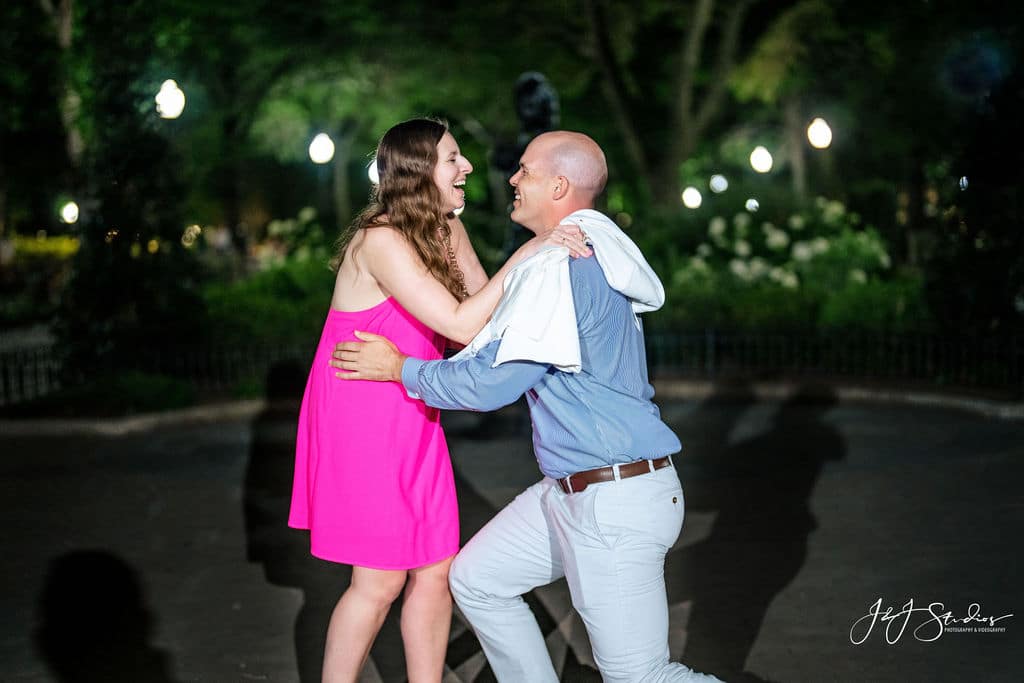 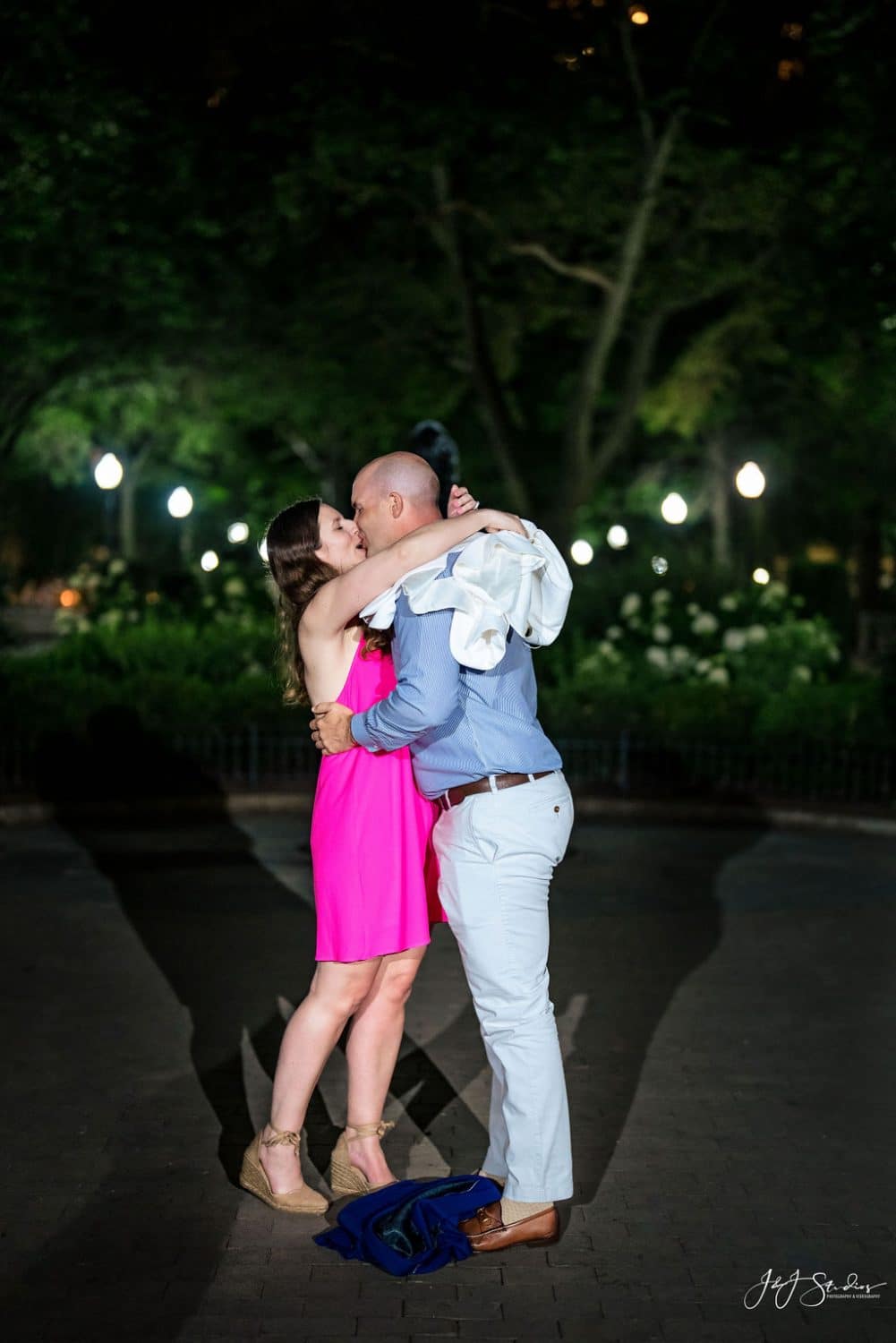 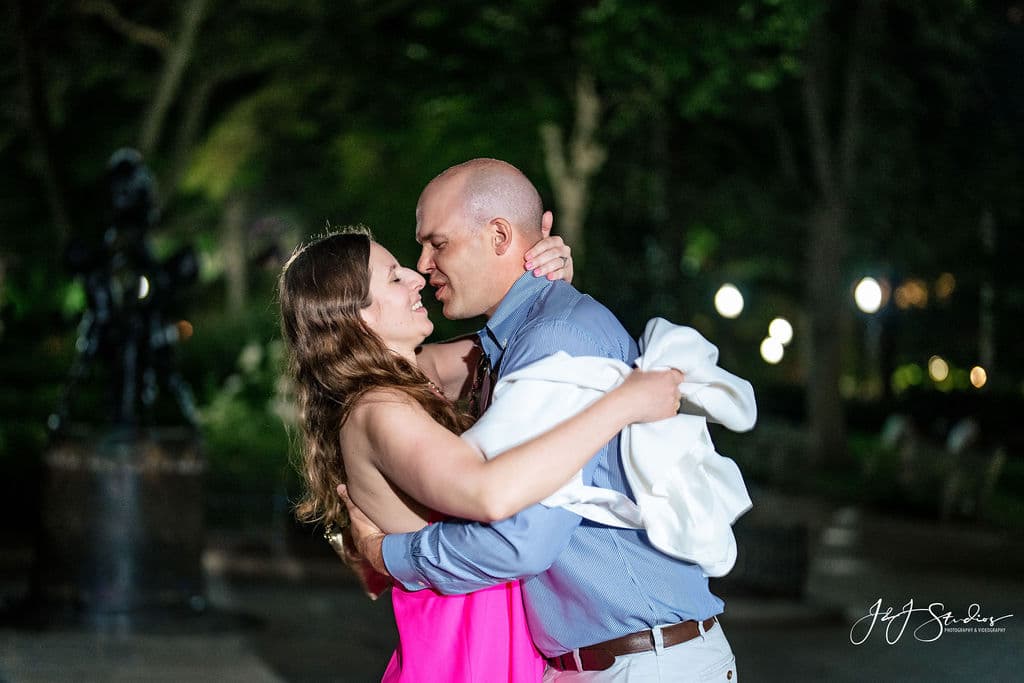 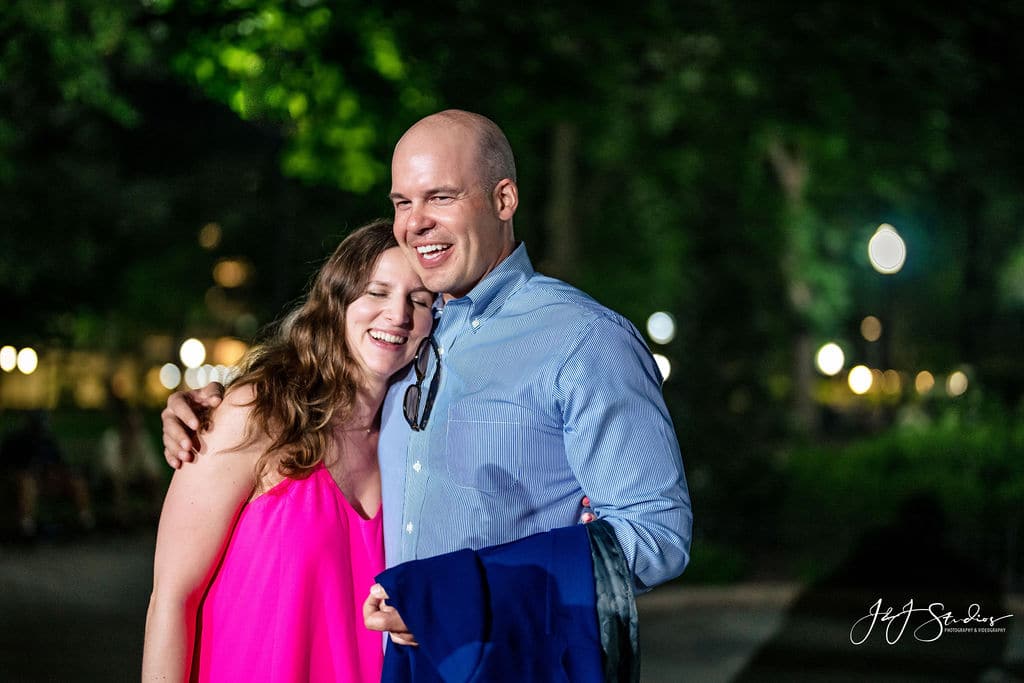 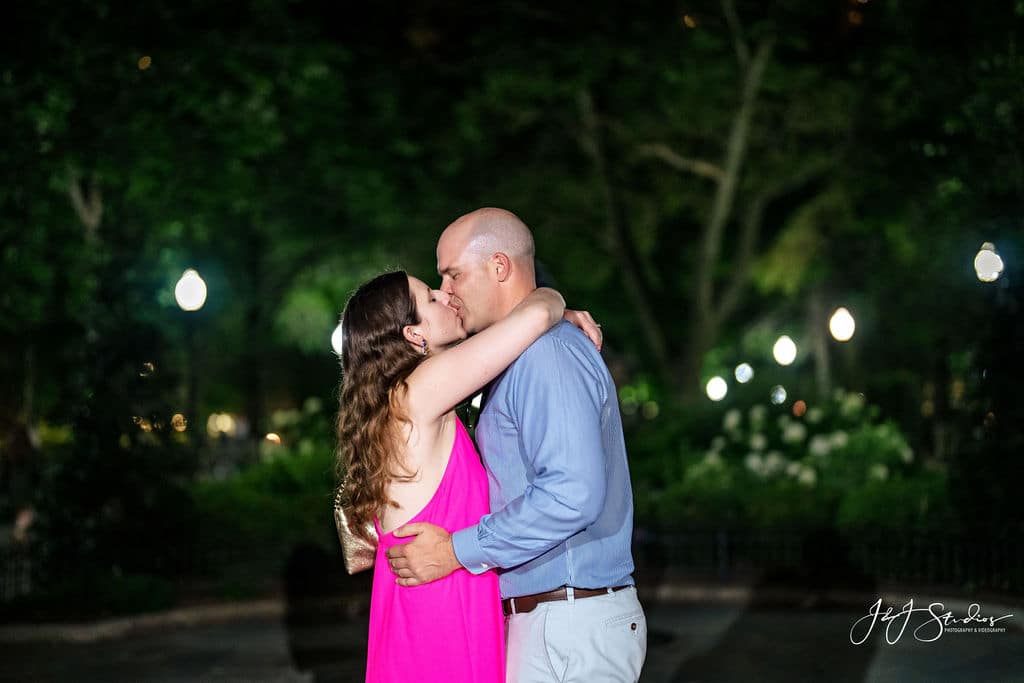 After the proposal, we snapped several photos of the newly engaged couple. We captured photos of the lovely couple all around Rittenhouse Square Park. 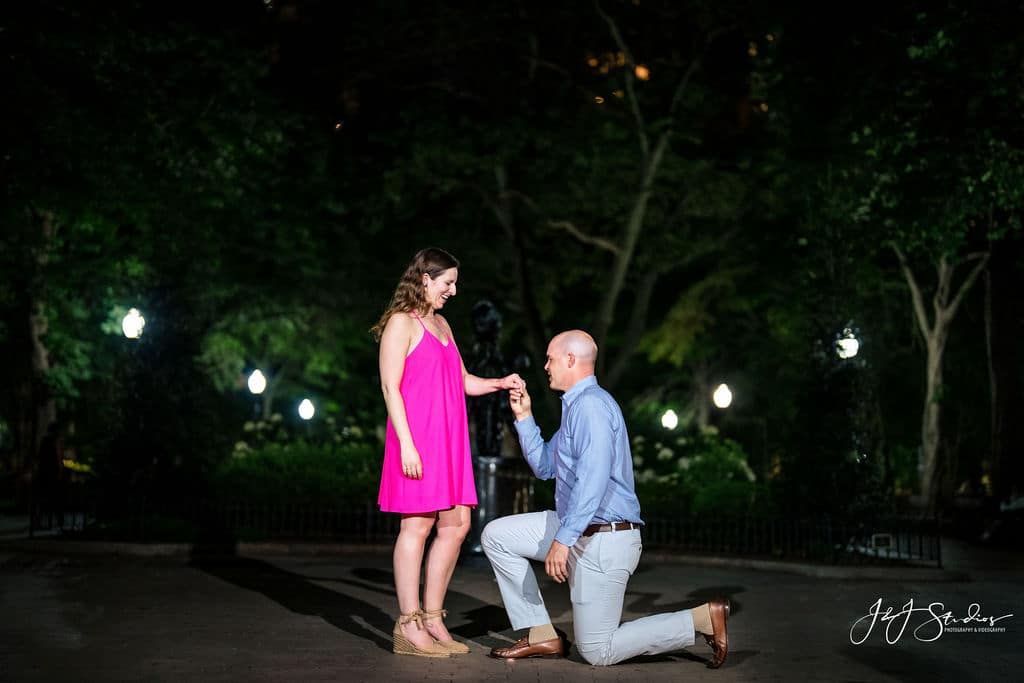 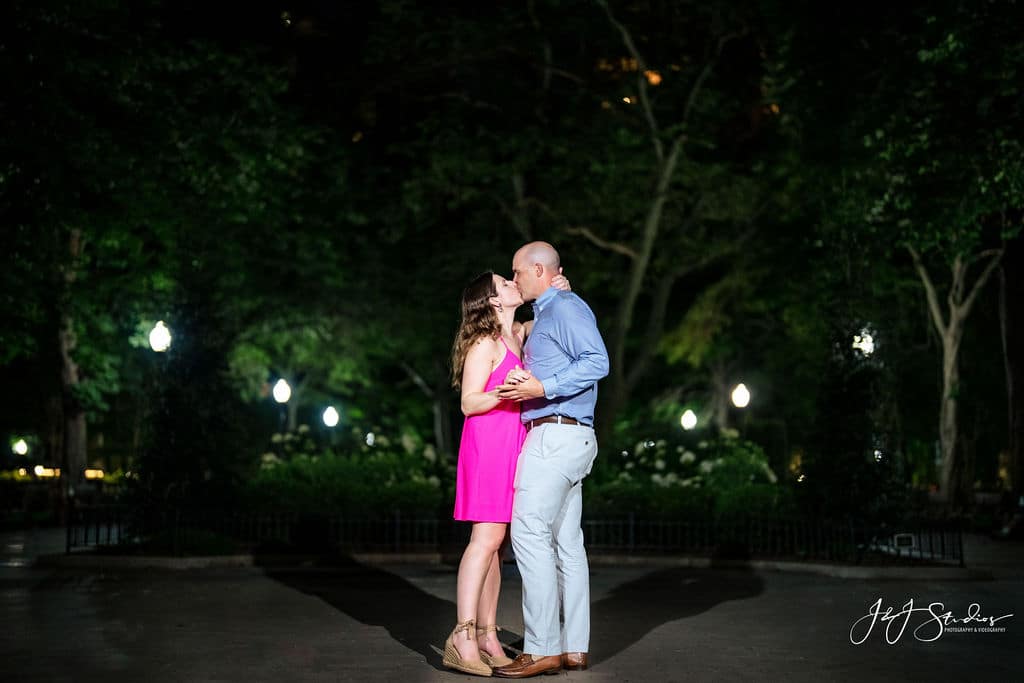 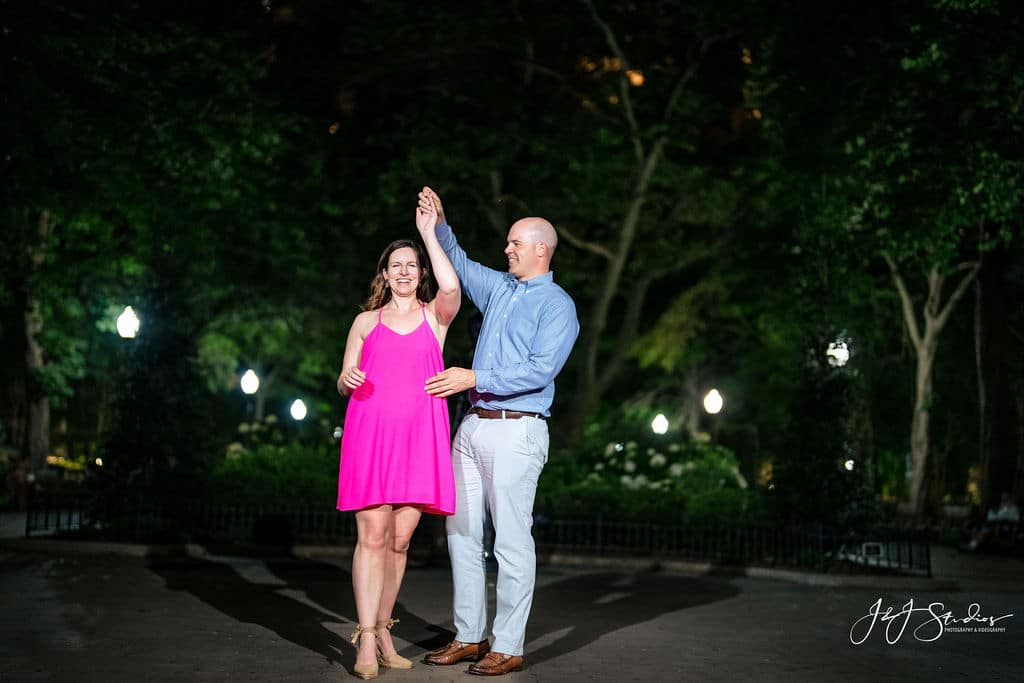 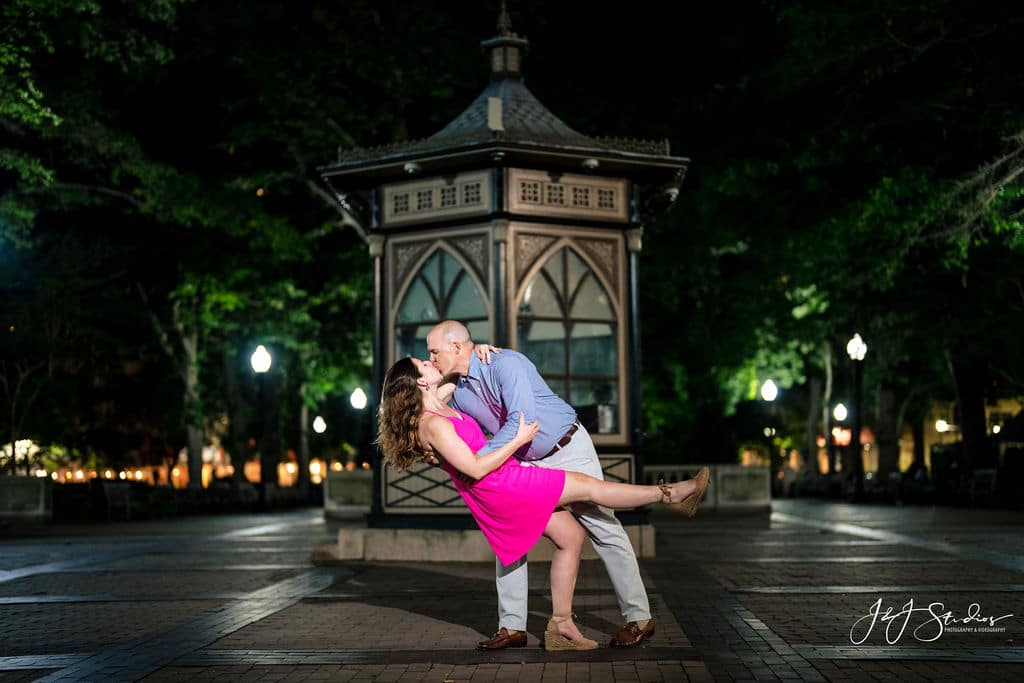 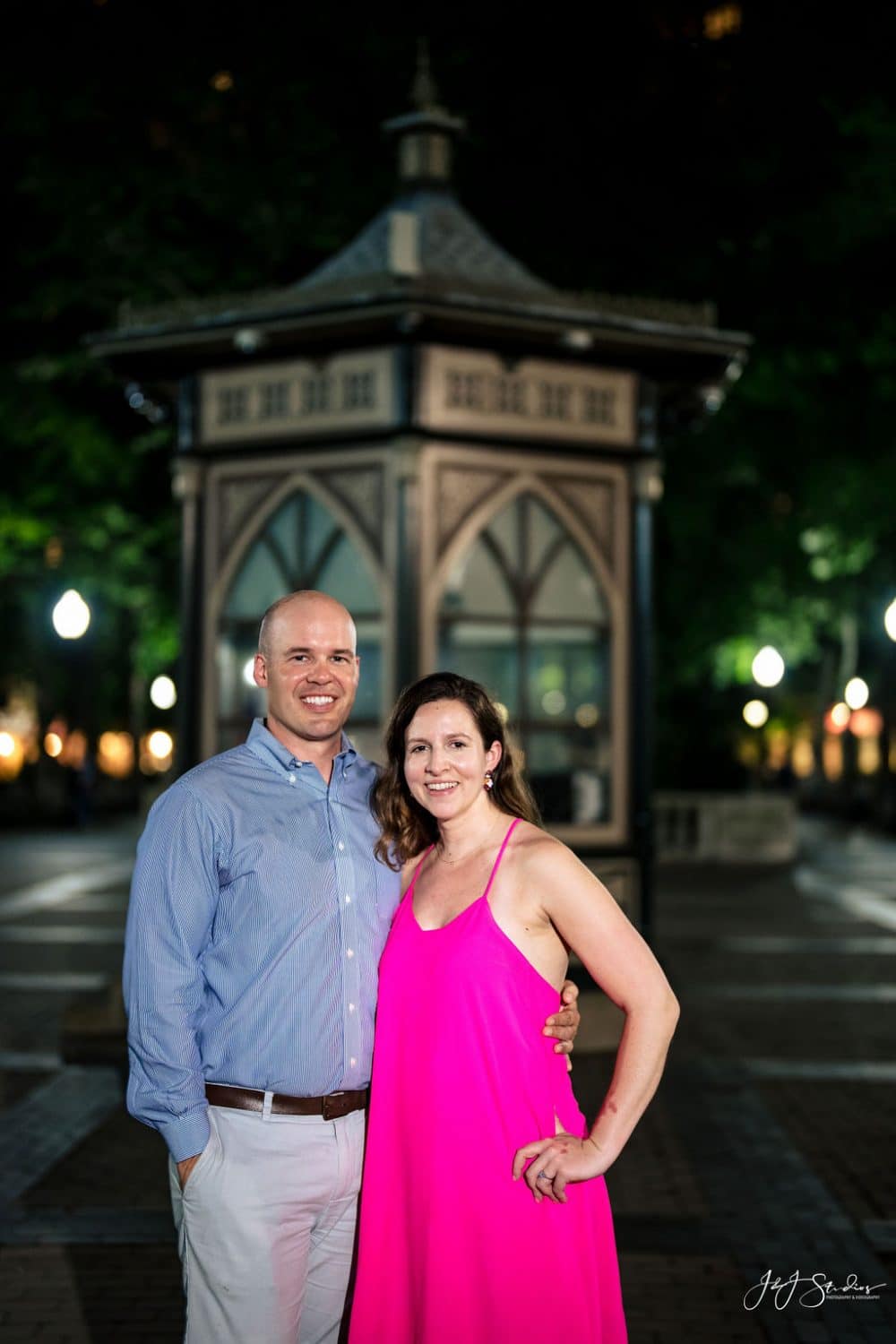 Are you planning a surprise proposal? Capturing your “Yes” on camera allows you and your significant other to relive the moment for several years to come. It’s beautiful moments like this that make our job worthwhile. Here at J&J Studios, we are committed to capturing a couple’s most memorable moments. Contact us today to schedule a consultation to discuss how our team can help make your day even more special.

J&J Studios is a popular photography studio based in Philadelphia and owned by award-winning photographer John Ryan. Our crew is dedicated to producing cutting-edge visuals for all kinds of special events. Our photography team travels to any location.